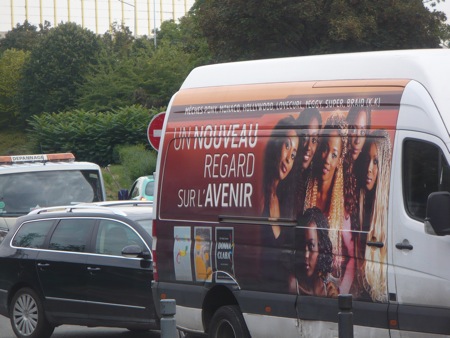 (A van advertisement called “a new look at the future” is just one example of how the “future” is mobilized in French marketing discourse.)

I am not a specialist in the literature on ethnographic methods per se, in spite of being an ethnographer by profession. This, I think, is a common situation for people in cultural anthropology; to judge by the lack of clear methodological discussion in most ethnographic articles, ethnography today doesn’t really demand much explicit methodological reflection. (In contemporary linguistic anthropology, by contrast, research methods are far more clear — though there too, and perhaps this ultimately is true of any empirical science, there is an enormous amount of unspoken choice, often arbitrary, that comes prior to the analysis of any particular object.) There is, of course, an existing literature on qualitative methods, one which in my experience is more often invoked in other social sciences, like sociology, where there is a greater range of possible methods and where method choice may demand more explicit justification. In cultural anthropology, on the other hand, ethnography is the norm and the default, and this literature on qualitative research is seldom invoked. I don’t really know that literature myself; at best I could give you citations of books I haven’t read.

Anyway, here I just wanted to give a little breakdown of ways of using ethnographic data. I won’t try to stipulate what does or doesn’t count as ethnographic data, though I’ll emphasize in passing that, paradigmatically, ethnographic data is what an ethnographer learns by personal observation of some stretch of social life somewhere. It can of course also involve any number of other materials, like photographic images, audio/visual recordings, native texts and artifacts (including genres like journalism that report on other stretches of social life), interviews (which are themselves a form of observed social life), secondary sources like demographic data, and so on.

(1) Historical data: a datum of “what happened” in a particular place and time. Part of the task of ethnography is after all to record events, processes, histories that did take place, and ethnographic data are at one level evidence of what happened. I would emphasize that this kind of “historical” data (for lack of a better word) need not be limited to direct observation, in spite of ethnography’s famous fixation on the concrete. On the contrary, our historical data is frequently quite indirect. My dissertation, for instance, will probably tell a story about French universities that really begins more than ten years ago, which is of course long before my arrival in France, and for which I’m assuming that various secondary sources provide reliable evidence. I will probably end up merging secondary sources and personal observation into one single historical narrative.

(2) Aesthetic data: a datum whose later representation conveys to readers the texture, the feeling, or the sense of a situation. There can, in other words, be ethnographic evidence that helps to create something of the ethnographic “reality-effect,” i.e. the sense of narratively superfluous but aesthetically crucial evidence that, among other things, helps create the impression that the ethnographer “really was there” in their fieldsite. (This is the sort of datum that I take it is central to creating the notorious “ethnographic authority,” but I would note that the employment of aesthetic details does have real epistemological and even emotional or stylistic functions as well as this authority function.)

(3) Exemplary data: a datum that illustrates some larger phenomena, whether an empirical pattern or a more abstract, theoretically defined entity. Here we’re talking about using evidence not to tell a story, nor to give an aesthetic sense of lived reality, but rather to index something else of a different order than the initial piece of data. For instance, earlier today I heard someone at an OECD conference say that it had been “an immense honor to be chair” of the conference. In a historical mode, I could use this tidbit of speech to tell the larger story of the conference. In a more exemplary mode, on the other hand, I might use it to demonstrate certain characteristics of honorific speech genres among academics, as a manifestation of the speaker’s position in a system of status hierarchy, or whatever.

It seems to me we have to distinguish at least two major forms of exemplary evidence: “empirical examples” and “theoretical examples.”

(a) Empirical examples: Data that indicates or reveals some feature of a cultural order, or some other order of empirical generality. I have in mind, for instance, something like using a photograph of a Parisian walking down the sidewalk in black clothes as an example of general norms of bourgeois dress in this city. I know this sounds completely trivial, but I want to emphasize again that we invoke a whole epistemology of “exemplarity” or “indicativeness” whenever we approach some piece of data as illustrative of some larger state of affairs. (Anthropologists, admittedly, are usually quite bad at talking about exactly “how exemplary” their data is.)

(b) Theoretical examples: Data that is made to illustrate, support, disprove, question, etc, some theoretical proposal within the intellectual field of anthropological ideas. So for instance, we could imagine someone using a set of data to question the idea that cultures are unified entities, or to support a semiotic theory of commodity exchange, or whatever. Often, and I think this bears notice, it takes a mental twist, an epistemological leap, to jump from the order of what’s observable to the order of one’s ideas about what one sees. Theoretical examples often have a touch of the arbitrary. because it helps anthropologists to bridge the (usually gigantic) gap between the specificity of their empirical findings and the collective intellectual concerns of the discipline.

(I note in passing that obviously these aren’t all that separable, that any empirical case presupposes some prior theory about the structure of the world, that indeed there is and ought to be lots of interplay between theorization and empirical generalization, and so on.)

(4) Evidence of the possible: data that we read as indicating what had to be the case for it to exist and hence what tacit structure of possibilities must have made it possible. The obvious example is the famous hypothetical scenario (invoked in arguments over God and evolution) where you are on an empty beach, you find a pocketwatch in the sand, and you infer that the necessary condition for the possibility of this watch is the existence of an intelligent designer. Of course, this sort of epistemological move also works with actual data: I have often tried to infer the structure of attitudes towards the future that makes French academic politics possible.

(This is a very abstract point, but I’d note that there’s a contrast here with the logic of “exemplification” that I described previously. Typically, the logic of “exemplification” entails trying to draw a relationship between two actual, existing kinds of things, even if one of them is perhaps more abstract or general than the other. The logic of inferring what had to have been possible for an X to exist, on the other hand, may involve positing more general or abstract phenomena, but more fundamentally involves positing a relationship between an actual X and a larger field (Y) of possible Xs, only some of which will have actually taken place.)

What do you think? What other epistemological relationships to our evidence have I forgotten? This list is avowedly provisional; these categories are basically just drawn from a quick mental inventory of the kinds of knowledge I’ve tried to derive from my own fieldwork experience. I would emphasize that of course these are not mutually exclusive; a little snippet of data can at once convey the texture of a situation, establish “what happened,” show something about a transcontextual empirical pattern, and have ramifications for anthropological theory at large. At the same time, though, these are all quite separable, and probably can’t ever be entirely integrated; it would be impossible to theorize every ethnographic detail that one presents to the reader. Anthropological knowledge, I fear, is unlikely ever to cohere into a nicely bounded whole.