In Benoît Peeters’ biography of Jacques Derrida, there is an intriguing interview with Derrida that was never published. Peeters writes:

In 1992, Jacques Derrida gave Osvaldo Muñoz an interview which concluded with a traditional ‘Proust questionnaire’. If this text, meant for the daily El País, was in the end not published, this is perhaps because Derrida deemed it a bit too revealing:

What are the depths of misery for you?: To lose my memory.

Where would you like to live?: In a place to which I can always return, in other words from which I can leave.

For what fault do you have the most indulgence?: Keeping a secret which one should not keep.

Favourite hero in a novel: Bartleby.

Your favourite heroines in real life?: I’m keeping that a secret.

Your favourite quality in a man?: To be able to confess that he is afraid.

Your favourite quality in a woman?: Thought.

Who would you like to have been?: Another who would remember me a bit.

My main character trait?: A certain lack of seriousness.

My dream of happiness?: To continue dreaming.

What would be my greatest misfortune?: Dying after the people I love.

What I hate more than anything?: Complacency and vulgarity.

The reform I most admire: Everything to do with the difference between the sexes.

The natural gift I would like to have: Musical genius.

How I would like to die: Taken completely by surprise.

My motto: Prefer to say yes.

One could say many things about this. But for now, I mainly want to observe that I am struck by the open sexism of admiring “thought” as a woman’s virtue while singling out “vulnerability” (in essence) as his preferred “quality in a man.” Of course, one of Peeters’ interviewees remarks that “In spite of his love of women and his closeness to feminism, he still had a bit of a misogynistic side, like many men of his generation.” 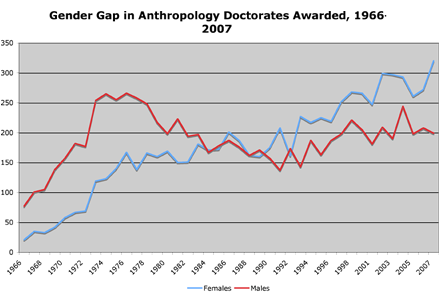 Important to note, it seems to me, is that although it’s true that the relative place of males and females has indeed been inverted, the overall picture here is that the two lines have risen together fairly regularly. Quite often, especially in the last fifteen years, we can see that little shifts correlate across genders, as in the little drops in 2001 and 2005. And the demographic expansion of the field in general is of a far greater demographic magnitude than the shift in gender balance. In 2007, we awarded more than five times the number of new doctorates as in 1966 (519 vs. 98) — a fact whose significance I will come back to later. But to get a better sense of changing gender ratios, consider a graph of women as a percentage of the total pool of doctoral recipients.
END_OF_DOCUMENT_TOKEN_TO_BE_REPLACED

I’ve been casting around for a place to start thinking about the workings of masculinity in universities. Ron Baenninger has come to the  rescue, having just published “Confessions of a male presidential spouse” in Inside Higher Ed. Baenninger was a professor at Temple U., and his spouse, MaryAnn Baenninger, is now president at the College of St. Benedict in Minnesota.

It’s quite a long piece, this confession. But it has a recurring image that seems deeply suggestive: the male husband polishing the woman president’s shoes.

If they could see me now. I am sitting on the floor of the president’s house, polishing the president’s shoes for her. My wife is now a lot busier than I am, and has a sizeable staff. Her importance on and off campus is a lot greater than mine, so I suppose it makes sense that I polish the presidential shoes – which are smaller and easier to polish than my own shoes (which rarely need to be shiny). I have sometimes seen people polish the shoes of other people, but only when they were paid for it. And the polishers were always male, as were the polishees. Shoe-polishing used to occur in railroad stations, or in old-fashioned barber shops that were bastions of maleness – quiet places, with discreet sounds of snipping and stropping of razors, with a ballgame on the radio, and smells of witch hazel, shaving lather, and shoe polish. So here I sit polishing a woman’s shoes and not even getting paid for it.

So when he polishes shoes, it seems, he finds himself in a moment of gendered abjection. He’s down on the floor, not even getting paid, polishing shoes which are symbols of power and sometimes sexuality and are themselves down on the ground, protecting the foot from the grime of the world; he’s in a position of no (relative) importance on campus so it’s pragmatically sensible for him to devote his time to polishing the shoes, for him to be doing this traditionally feminine work of the care of the working spouse’s appearance.

Alongside the structural sexism of this whole outlook, there’s something slightly poignant about the fact that what this man has to do is hard for him and takes re-learning and is symbolically dissonant for him. The echoes of his 50s upbringing are loud, as if he’s judging his life against the gender norms of the past even as he knows the world has changed, gender norms have blurred, roles have reversed. He feels like he’s just not completely ready for the task of taking care of the household while his wife works long presidential days. He seems happiest when he gets to take care of the car, when he drives his wife around, when he cooks dinner.

As boys, most men of my generation never learned to do “girl things”. As a consequence we are not very good at the practical or aesthetic details of maintaining an elegant home, or paying attention to all the important minutiae that underlie the public lives of presidents and their spouses. Things like making sure the silver is polished, as well as the shoes, and checking that napkins and table cloths are ironed and matching. Before her dinner parties I can recall my Mum putting out ashtrays and placing cigarettes in elegant silver receptacles from which smokers (a majority back in those days) would extract their smokes. The most she expected me to do was tidy up my own room. Surveys have shown that the only task husbands do almost universally is taking out the trash. In recent decades some of us also learned to do cooking, cleaning, shopping, looking after the kids, etc., but we reminded many people of the chimpanzee who typed out a novel — nobody expected us to do such things well, and it was remarkable if we could do them at all.

And he seems sad that some things he might be doing – making the house elegant, polishing the silver, doing the ashtrays – are things that boys just weren’t taught. Masculinity here is a practical predicament. Masculinity here is not just a gender identity but a set of quotidian competences and another set of lacking competences, of practical incapacities. Gender as point of pride, as product of socialization, as disability, as occasion for solidarity with other men who like to work on cars. Gender would seem to be a contradictory situation that causes many things to happen at once. He seems half sad that he can’t do some things and half accepting, with an almost traumatized calmness, that he probably won’t do and wouldn’t entirely be expected to do women’s work that still, in the crevices of the language of this text, seems to appear to him as abject.

Structure here is the man’s incapacity to see shoe-shining as not abject. Structure is this unexplained incapacity to shift contexts. Since shoeshining used to be something just done among men, accepted as an odd form of masculine care labor a bit like a pedicure. Shoeshining started to feel bad to him when it was an uncompensated service to a woman.

Someone in the comments section of the article asked if she (I think she) could drop her shoes off outside the man’s office door. But she was joking.

Jokes show us that something real is at stake.

Masculine consciousness here is so deeply about shame and managing shame. As if what underlay this whole system of masculine values was a systemic fear of women and a phobic hatred of being in their shoes. Over which humanistic values are overlaid, like upholstery for a lethal structure. 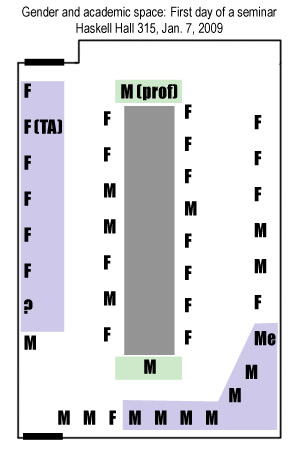 END_OF_DOCUMENT_TOKEN_TO_BE_REPLACED

This is going to be crude and quantitative, but I want to give a bit of concrete evidence bearing on a trend that, I suppose, must already be subjectively apparent to everyone who pays attention to gender in academic life: the tendency for males to speak first, or in particular, to be the first to volunteer comments in large public discussions. This obviously isn’t the case always and everywhere, and must be shaped by a large number of variables: group size, topic, distribution of interest and topical expertise, social rank and authority, and degree of acquaintanceship or shared social belonging, to name a few. For instance, I don’t notice this trend when the anthropology faculty, who are colleagues well known to each other, are responding to guest speakers at the weekly department seminar. But I did notice this trend very strongly at a public lecture by Bernie Sanders in December, where about the first ten speakers were all male, while only a very few women got to comment at all, and they were towards the very end of the line.

But to avoid making claims based purely on the hazardous results of personal experience, let me report the following.