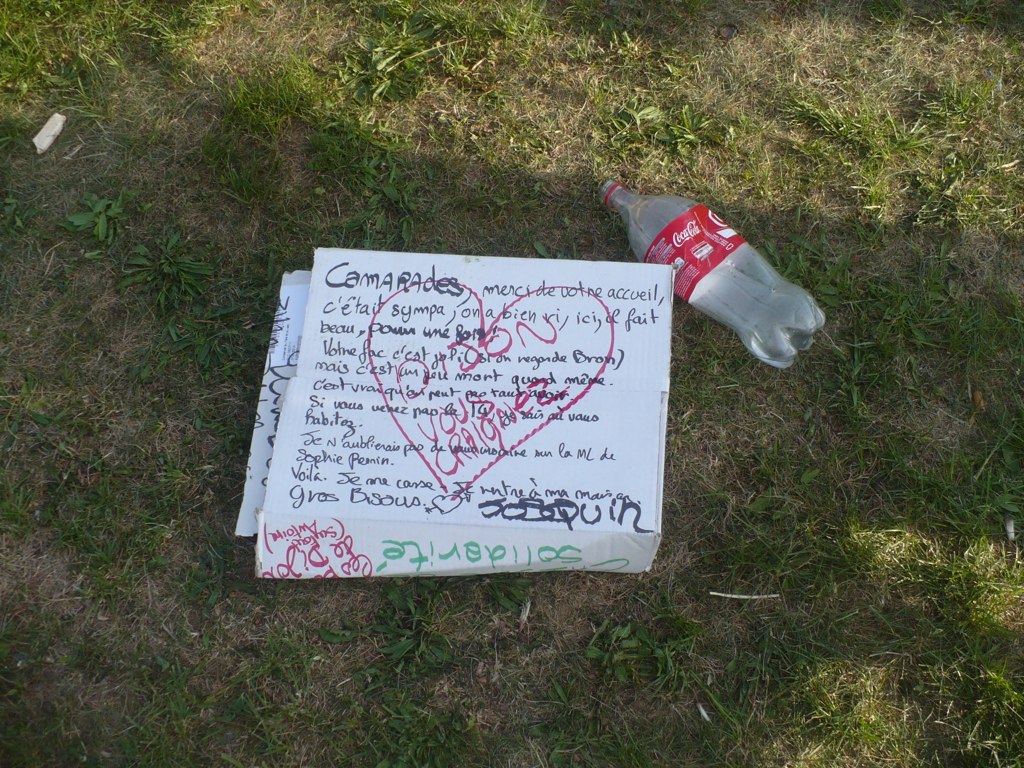 I’ve been working on a paper about the failure of left-wing internationalism at the “European counter-summits” (at least the two that I was able to observe in 2010 and 2011), and I’ve gotten interested in this love letter to the organizers of the 2011 Dijon counter-G8 university summit. A student left it on the ground in marker as they left the event, which was politically pretty unsuccessful, as my paper explains.

The letter reads as follows:

Which one could translate loosely as:

Comrades, thanks for having us, it was chill, we laughed a lot here, for once it was nice out.

Your campus is pretty (if you look at Bron) but there’s not much going on here. I guess you can’t have everything. If you don’t show up on the 14th, I know where you live.

This text is more or less straightforward, though there are always a few references that are hard to figure out from a distance. For instance, I think the comparison to Bron must be referring to the Université de Lyon 2’s campus in Bron (a suburb of Lyon); I haven’t seen that university, but I wouldn’t be surprised if it was indeed less pretty than the Dijon campus. In any event, details aside, I like this text because of the obvious affection and warmth it shows among French student activists.

But there’s another part of it that I find more puzzling: the huge red writing overlaid on the letter that says DIJON VOUS CRAIGNEZ.

Craindre is the French equivalent of the English verb to fear. Normally it’s a transitive verb, and if it were conjugated in the third person here (Dijon vous craint), the sentiment would be something like “Dijon fears you,” that is, “Dijon is afraid of you, the protesters.” But here it’s conjugated in the second person plural, craignez, so vous has to be the subject rather than the object. Apparently there is a more colloquial sense of craindre that’s intransitive — Larousse glosses this as “ne pas être à la hauteur de la situation, être nul, mauvais, détestable,” which comes to “not being up to a situation, being good for nothing, detestable.”

So maybe if Dijon is being weirdly addressed in the second person as vous, we could understand this as something like “Dijon, you’re no good,” or even “Dijon, you suck.”

Which might indeed be a fitting sentiment for someone who had just been to a disappointing, heavily-policed protest.

But I wonder if any Francophones can shed more light on this?