Last weekend, under the auspices of a program called European Heritage Days, I went on a tour of the offices of the Minister of Higher Education. I’ve been in the building before for various academic events, but, unsurprisingly, the part that has the Minister’s office is separate from the part that ordinary visitors usually see. 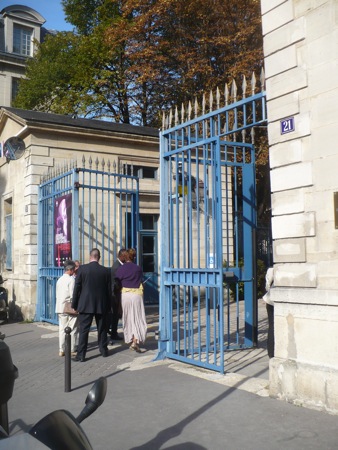 This gate isn’t normally open to the public. There was something vaguely contradictory about the staff’s relation with the public, like in an art museum where they’re there to smile at you but also to protect the place against you. At this gate, two people stood watch in suits: one of them was radiant and tried to persuade every passing person to come visit; the other (back to the camera) seemed silent and kept watch.

Farther inside the premises, there were security guards stationed at every corner. I suspect that they don’t patrol that heavily on usual days, since the workers seemed unfamiliar with each other. I overheard one guard asking another, “What was the name of that guy downstairs, again?” “Umm, no idea.” 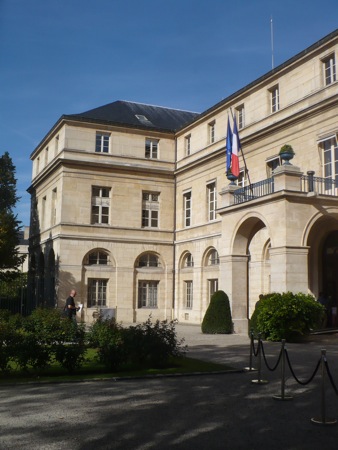 This, the building where the Minister has her office, is what I would describe as standard French government architecture. Pale stone, French and European flags. Leaping arches, solemn columns. The decoration is more than merely functional, but not ostentatious. 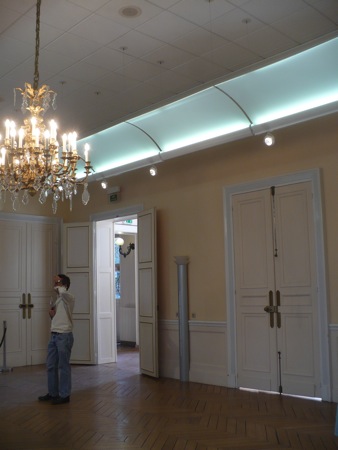 The first room you saw inside was this, apparently a place where they hold press conferences and the like. I noticed that the decor combined very traditional features like a parquet floor and a chandelier with very businesslike, modern features like a tiled ceiling and little spotlights. I guess that’s how you try to be modern while retaining the aura of past forms of architectural dignity. 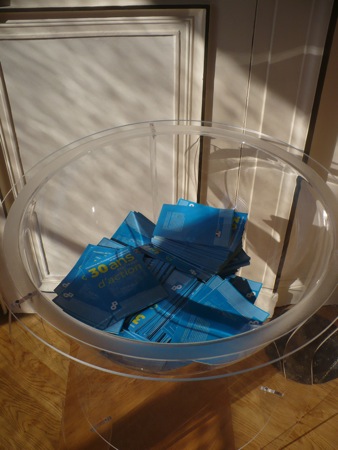 They were handing out little pamphlet histories of the last thirty years of higher education. I may look at the details of this ministerial history in a later post; it was an odd mix of Big Science accomplishments (particle accelerators and the like) with organizational reforms in French higher ed. 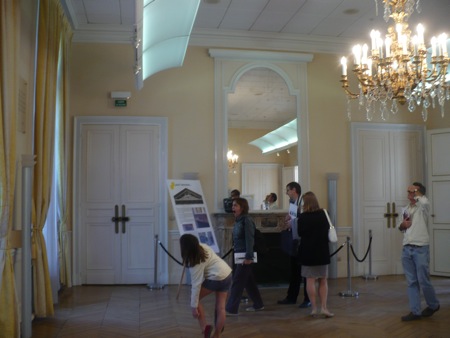 Looking back across the room, we can see that one guy rubs his forehead, one woman yawns, one girl scratches her shin, and a couple seems to be reading the informational display. 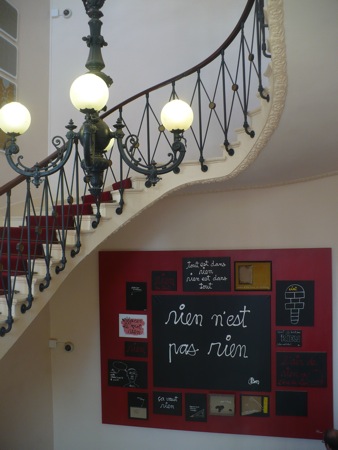 Up the staircase to the Minister’s office, a curious piece of art tells us that “nothing is not nothing.” 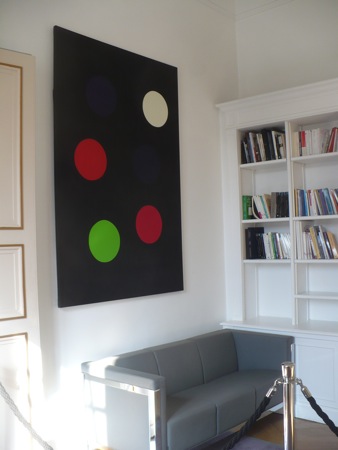 Abstract art seems to be the theme. This was the Minister’s outer waiting room, complete with a collection of random academic books. 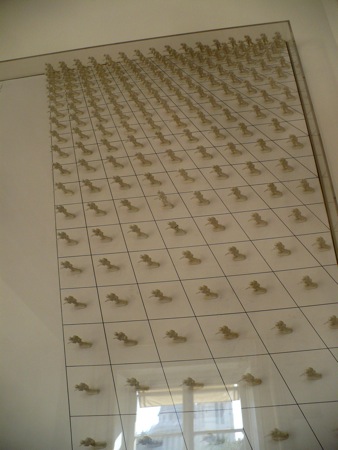 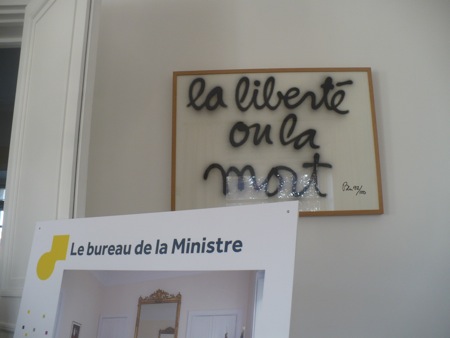 “Liberty or Death!” If that message really does draw on the famous American Revolution speech (“Give me liberty or give me death“) then it might be the most prominent sign of American political inspiration in this whole establishment. 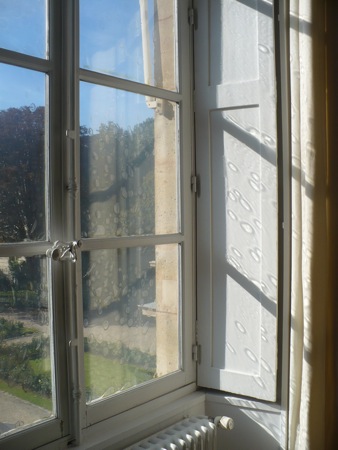 Old glass in the windows lets through droplets of oily sunlight. 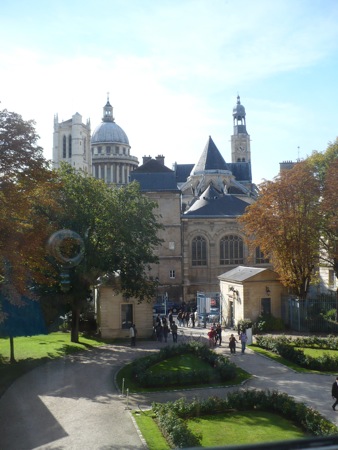 The view from this second antechamber looks out over the Panthéon. I’m tempted to guess that this highly symbolically loaded scene was deliberately organized by the architects. 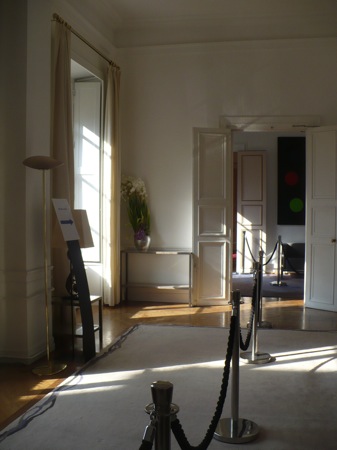 They had installed ropes for crowd control, and to keep you from touching anything important. 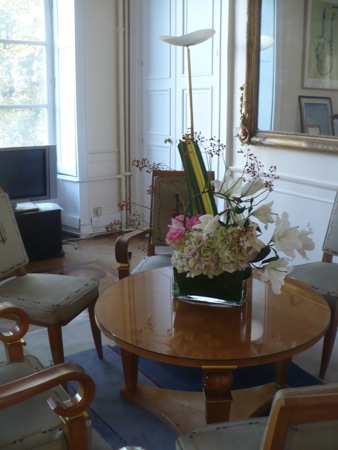 Here we have the shiny conference table in Madame Pécresse’s office. Always interesting to observe the prominent ceremonial use of plants, and more specifically of flowers, in these settings. 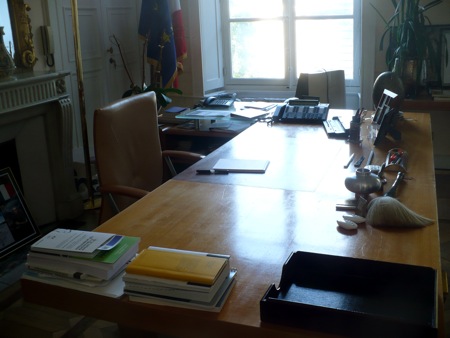 The Minister’s desk: it has some little stacks of books, some art objects, a few little photographs, a flag in the corner. Certainly fancy but hardly overwhelmingly ostentatious, especially by French standards. I was curious about why there were two telephones, given that either one of them looked able to handle a dozen telephone lines at once.

A ceremonial photo of her boss hung on the wall. To the right was a photo of a rocket launch, a further reminder of the ministerial emphasis on Big Science-esque national accomplishments. That thing at the bottom looks like a statue of dove siamese twins. 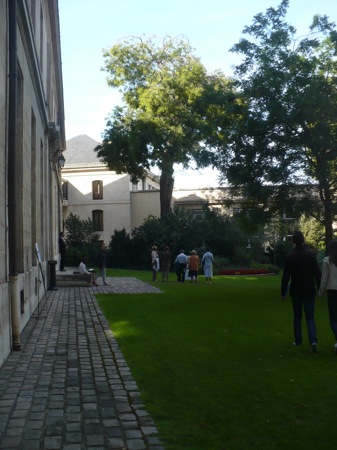 Beneath her office window, there was a carefully kept, walled garden. At left you can just make out the vertical figure of a security guard. He had excellent posture. 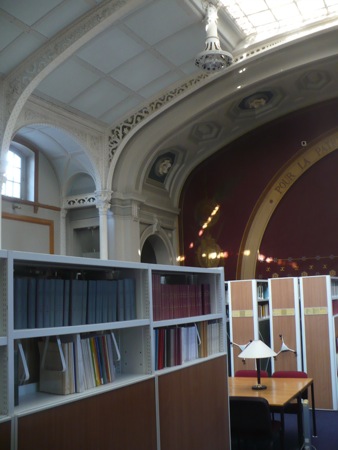 Claude Lévi-Strauss’s former library was in this room, they were proud to tell us. 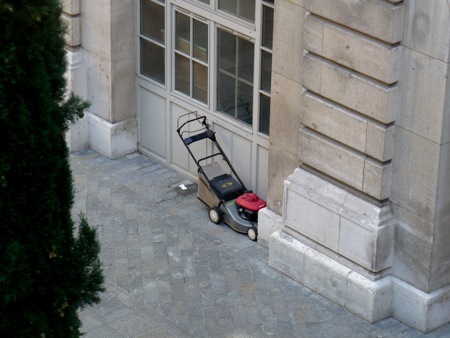 Looking out from the back garden, the ministerial lawn mower was stowed away in a corner of a lower courtyard. Off camera to the left, I spotted a security guard sitting on an out-of-the-way bench, staring at nothing in particular. 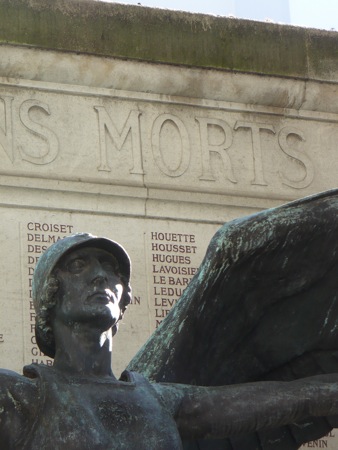 A war memorial initially seems out of place at an education ministry, but you have to remind yourself that these buildings are the former premises of a prestigious military engineering school, the Ecole Polytechnique. 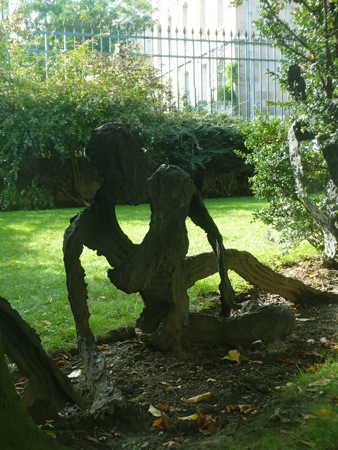 This sculpture seemed to me to evoke far more agony than the war memorial. The official description read something like this:

Three anthropomorphic sculptures in bronze stand in the garden to the right of the Court of Honor, enclosing the plants. Three characters, one upright, one kneeling, and the third lying down, are set on cement foundations laid in the soil. They have been there since the 1980s.

Giuseppe Penone, the sculptor, is an Italian representative of Arte Povera. Here his gesture sets a constraint on nature without preventing the growth of the tree. The presence of the plant also reveals a certain relation to time, growing with the rhythm of a different lifecycle from our own. The artist explains that the oxidation of the bronze, exposed to the elements, gives the metal an aspect much like that of the leaf or the trunk “as if the plants produced the sculpture”…

If you could see off to the left of the photo, you’d see that a small tree was engulfed by another one of these metal figures. At any rate, we have here a quite different ceremonial use of plants from that visible on the Minister’s conference table bouquet. If you wanted to theorize about it, you could perhaps say something about the way that art and plant life, far from embodying an opposition between “cultured” activity and wild nature, in fact end up serving a similar ornamental function in this setting. They render things solemn. They’re pretty. And in a place as cramped as central Paris, it’s difficult not to see this sort of deliberately unpragmatic space as a form of conspicuous consumption of real estate.