For about two weeks this month, a large space by the entrance to Paris-8 was occupied by students. It had formerly been a coffeeshop operated by a private company, but had been closed months or years ago. 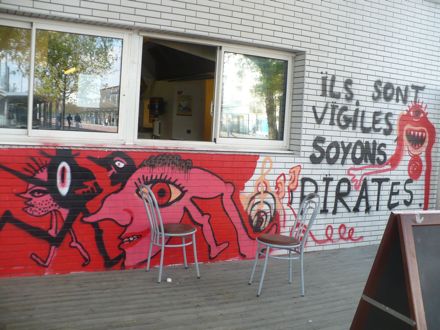 To enter after hours when the campus was supposed to be closed, you had to climb up on that chair and through the window and down a little stepladder on the far side. 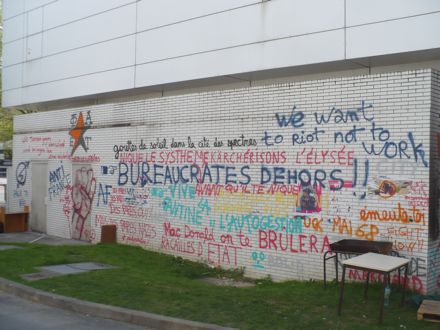 One of the occupants’ favorite activities was decorating the walls of adjacent university buildings. This wall was, as far as I recall, pretty much blank before the occupation began; the slogans now read “Bureaucrats outside!” “McDonald’s, we’ll burn you.” “State Rabble.” “Screw the government’s cleansing system before it screws you.” “Riot!” “Fuck may 68, fight now!” “Anti-France” (I have no idea what this one means, by the way). “Drops of sunshine in the city of ghosts.” “Long live the canteen and worker’s self-management” [this refers to a recent campus event I can only describe as student-organized Food Not Bombs for undocumented workers]. “Popes, popes, popes, yes. But nazi and pedophile popes?” “Burn the prisons, destroy the immigration detention centers.”

We can deduce from this photo that someone had invested in numerous colors of spraypaint. 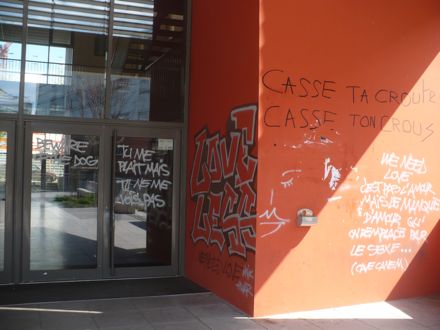 I met one of the graffiti artists and he was particularly proud of “Loveless.” 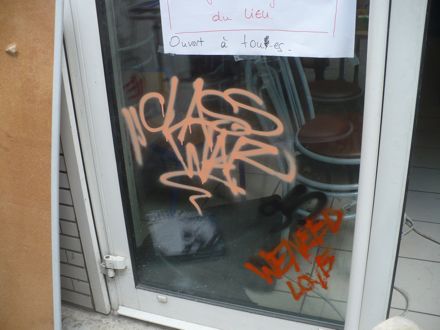 And of his slogans about “Class War.” (“We need love” it says in the corner.) (Don’t ask me what it means that he wrote in English, because I don’t know myself.)

Baptiste Coulmont, a Paris-8 sociology professor who’s also posted about this occupation, posted some similar pictures, describing it as “vandalismes et de dégradations (oups) d’expressions artistiques contre-culturelles sur lesquelles il ne faudrait porter de jugement.” That is, it’s “vandalism and degradation (oops) counter-cultural artistic expression that must not be judged.” Whatever Coulmont’s personal position may be, self-contradictory sentences like this show us the split consciousness and irreconcilable values that are so common at Paris-8. On the one hand, campus graffiti is viewed as a traditional form of free expression; on the other hand, there’s a major desire to build new, clean, “nice” university spaces. The more the campus improves its physical architecture, the more (implicitly) it sets itself apart from the somewhat downtrodden neighborhood it lives in. 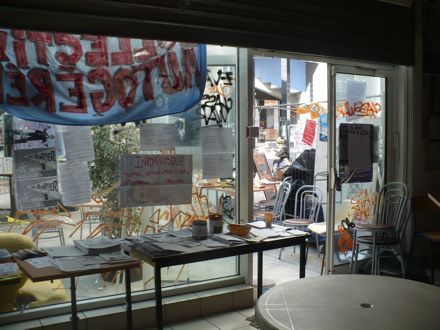 The occupied space itself was divided into various areas: an agitprop table, a set of bookshelves labeled “feminist library,” a “free shop” that had clothes for exchange, a sleeping area, a bunch of tables where people ate, a kitchen. This was the agitprop table, looking out onto the semi-occupied terrace with its littered chairs. 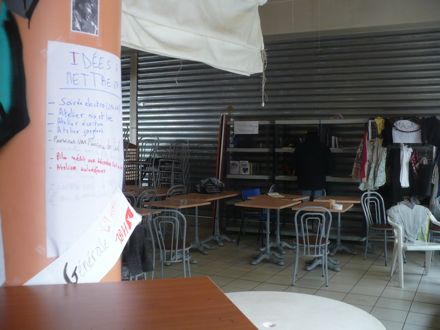 That’s the feminist library in the background. 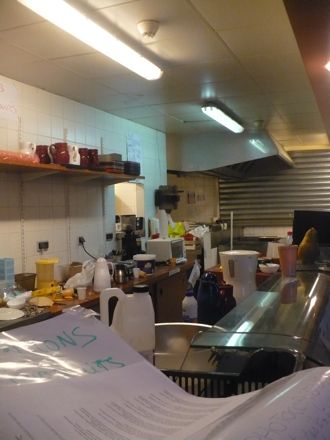 The kitchen felt curiously familiar: it reminded me of hippie co-op houses I know in the United States. Everything was sort of a mess but it felt lively. (There aren’t any pictures of the occupants here, though; they didn’t like the idea of being on camera. Possibly worried about the legal repercussions of being caught at the scene.) 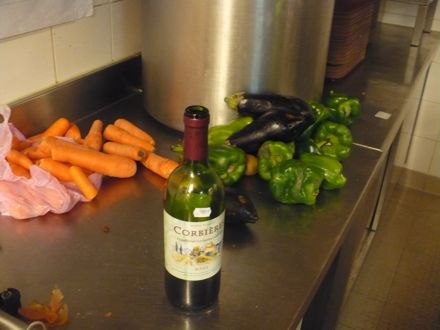 The occupiers were apparently planning to accompany their wine with a side salad of green peppers, eggplant and broken carrots. 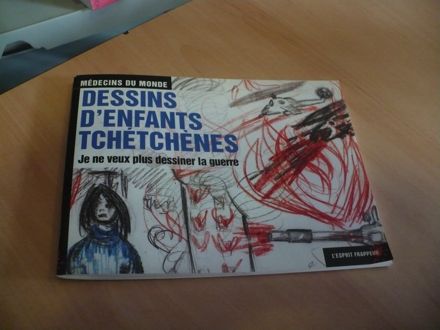 I asked someone in the feminist library what I should take pictures of, saying I wanted to record some traces of the scene. He suggested I look at a political book he had handy: “Chechen Children’s Drawings: I don’t want to draw war any more.” 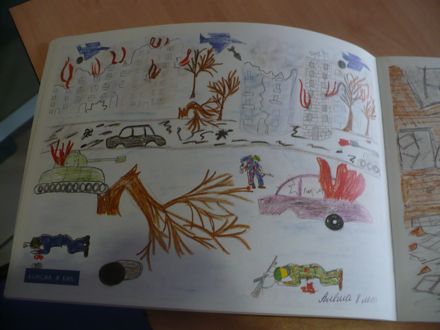 The drawings were, frankly, depressing, but that’s only to be expected. 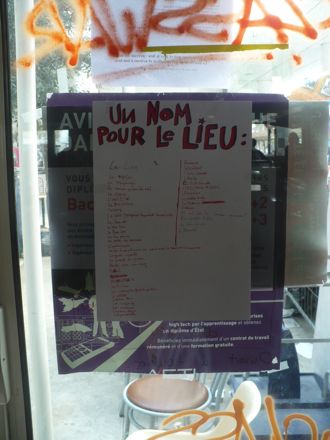 Although the overall political merits of the occupation are very much open to debate, I was quite impressed by the overall flourishing of new social organization. Everywhere there were lists of supplies to buy, lists of projects to attempt, instructions on how to use kitchen appliances. Here you can see another sign of nascent domesticity: a long list of proposed names for the occupied space.

Some of the names were awfully straightforward: “The Place (le lieu)” or “Free Occupation (occupation libre)” or “GAV, the Anarchist Vandalist Group.” But others were more idiosyncratic: “Siberia” (which was also the name for the walk-in freezer), or “The Eye (l’oeil),” “The Asylum (l’asile),” “The Ambush (l’embuscade),” or “The Non-Place (le non-lieu).” Some even managed to be incomprehensible: “Le Bischkek (capital of Kyrgyzstan?),” “Panorami (?),” “Fikdouin (?).”

At any rate, in this desire to find a name, I felt an intense and fascinating desire to create a new, almost-domestic space in an otherwise impersonal, sometimes slightly grim campus environment. 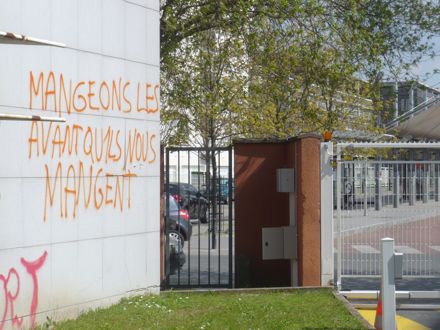 After about two weeks, the university administration chained the doors shut and the students gave up the project. I’m told they were discouraged by a brawl which took place there about a week into the project. “The open space is now closed,” a friend informed me mock-seriously afterwards.

One of the occupation’s many spray-painted slogans, the one pictured here, had read: “Eat them before they eat us.” As it turns out, it was the occupation that got eaten first.