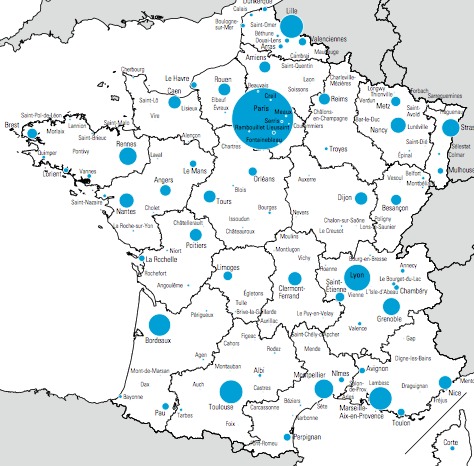 The second massification saw the explosion of IUTs (University Technical Institutes), local universities, and off-campus university branches; the relative size of Paris and of the Parisian region fell considerably in the face of a process of growing regionalization in higher education. This was accompanied by major growth in the faculty of law and economic sciences, while letters and human sciences, and especially the hard sciences, grew less than average. The medical disciplines, because of the fixed limits on their admissions, saw the relative size of their teaching faculty considerably diminished.

I’m not an expert like Soulié on what he would call changing disciplinary morphology — that is, the changes in proportional sizes of the disciplines. But the gist here, which is supported by various other publications I’ve come across, is that the “new” social sciences grew in the 60s, while now it’s the more vocational fields (business, economics, etc) which are the major growth fields. And if it’s true that, as Soulié says, the most recent university expansion goes hand in hand with university regionalization, then we might reasonably expect that Paris, the more traditional academic capital, would remain more dominant in older fields like “letters, languages and human sciences.” As is, to judge by this map of letters and human sciences enrollments, indeed the case: 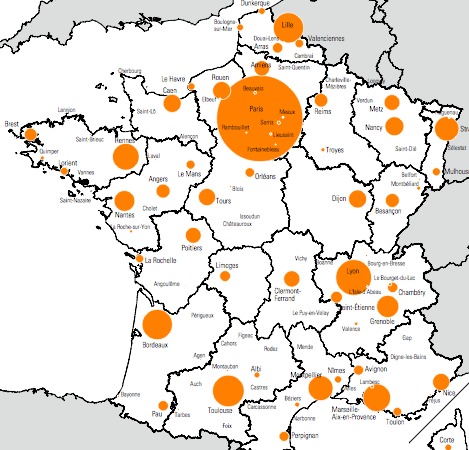 It’s obvious from visual inspection that the relative size of Paris is much larger here than in the other diagram. I couldn’t easily find the exact figures for each city, but the key (which I had to crop) suggests that Paris has 120,000, while the other large dots are only a few tens of thousands. In other words, it does seem to be the case that the most traditional subjects (the humanities and social sciences) are particularly Paris-centered.

Indeed, if we look at the distribution of doctoral enrollments, we can see that Paris is, if anything, even more overwhelmingly dominant: 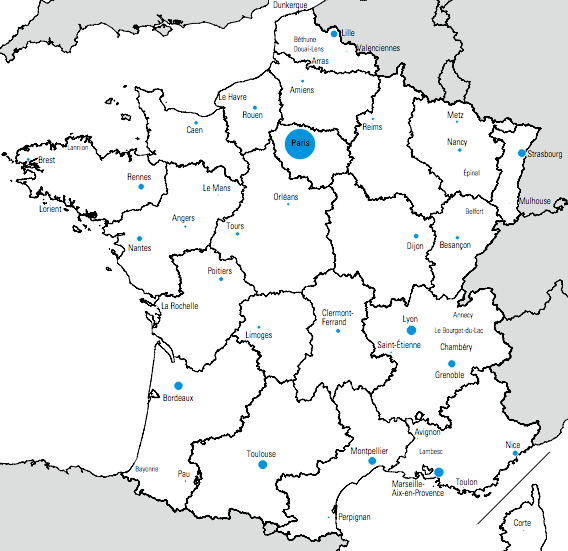 Here Paris is represented by a dot that means 20,000, while the other dots are probably one or two thousand and less. In other words, even if university education has been spread around the country, the reproduction of the disciplines, of the professoriate, of the academic “corps” remains almost exclusively a Parisian concern.

Unfortunately, I’ve yet to find data about the changing rates of Parisian (demographic) dominance narrowed down by discipline and degree level. But I think we can assume that some disciplines are less centralized than others, and that the degrees of Parisian centralization have shifted at different rates depending on the disciplines. I’ll try to track that down. In the meantime, it’s interesting to reflect on the curious interrelations we see here between ongoing Parisian dominance and growing but only relative decentralization. It’s as if there’s decentralization, but only according to a pre-existing spatial hierarchy. Ongoing centralization and gradual decentralization at once. Which should be no surprise to readers of David Harvey on contradictory spatial processes…

One thought on “French university towns and decentralization”