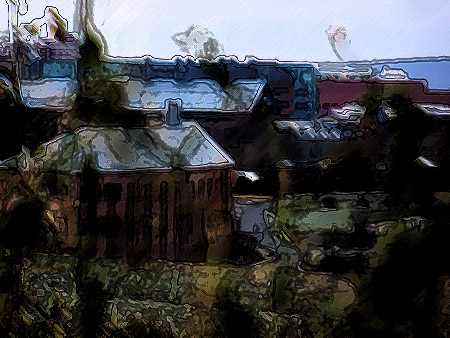 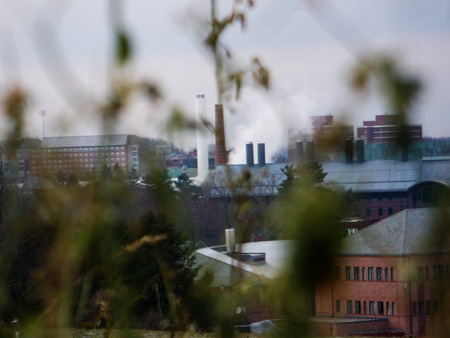 The skyline of a campus is different when it’s obscured by the trudging stalks of its scrub plants.

The university can so easily be made to become a tipsy line drawing mauled by the shadows of leaves and stalks.

Does that mean that we could hope to dig past the complex inner workings of academic cultures to uncover their aesthetic surfaces, as purely superficial, trivial, unpredictable visual experiences?

So often the public parts of academic space are either purely functional, or else over-designed by people with a crude and ritualistic sense of style. We get bare heating ducts or else we get marble pillars, fountains and hyperbolic flower arrangements. But what about the little aesthetic accidents, the roofs through weeds, the window on nothing, the long gallop of a chainlink fence pierced by a gate?

I suppose the first thing to say about visual analysis of academic culture is that the architects’ and bureaucrats’ intentions must diverge wildly both from the space as it is actually built, and from the varying visual experiences of the space that different people have. And the slow look of an analyst has little in common with the glance of a busy professor. (Probably it has more in common with the eye of a bored student studying the lecture hall ceiling.)

If you look at the campus from a certain point of view, your camera down in the dirt, the clear lines of roofs and windows are obscured by huge and dark shapes.

Weeds have a skyline too. The whole aesthetic structure of academic space is overturned if you lie on the ground and look out from there. The weeds look higher than the tallest chimney. They are blurry, hard to bring in focus, almost dizzying.

One thought on “Universities seen through their weeds”