Here in the airport at Boston it’s dark. Not yet night, but a gristly dusk. A man in an orange vest is standing almost motionless on a yellow platform next to our aircraft; periodically he climbs up and down a ladder; periodically he pushes buttons on a console. The runways are white with snow and the sky looks like whale oil. It appears that they are unloading a large snowdrift from the aircraft’s hold; a large pale mass, with jagged edges and wrapped in a net, is being pushed back and forth on a little dolly. As if the plane was transporting an iceberg in a sack.

I am waiting for my flight which will bring me back to France and hence to my fieldsite. It leaves in an hour. It seems a bit strange, flying on new year’s eve, but it was, of course, the cheapest flight and I want to be back on monday for classes. I find it hard to say why it’s a little sad to spend a holiday in the nonplace of the airport and the airplane, but that inarticulate sense of missing out maybe owes its inarticulateness to the fact that the sacred is social and comes to us outside like a norm, a norm which one can feel without being able to explain. In one of my first anthropology classes we read about the Sun Dance, a native american ritual for renewing the world (I think; it was a long time ago), and I remember saying to my professor that I couldn’t relate to that, that it seemed weird to endow a dance with any kind of cosmological significance. But my teacher said, We have New Year’s, it’s sort of the same thing, a ritual of renewing the social world (even if not necessarily the physical world, I probably quibbled to myself).

The sense of returning to the field is different from going the first time; the anxieties of beginnings are presumably over, but I have a sense of having far too much to read, far too much to do, to figure out; there’s a (predictable) sense of not having a satisfying order to impose on my data and field experience; there are 1936 items just in my RSS feed of French research-related blogs that I haven’t read; there are 1790 PDFs in my folder of scholarly articles, mostly waiting to be read; the digital moment makes it too easy to acquire too much; it could be called a state of perpetual epistemological excess. The emerging orders of the situation still feel tenuous.

But the flight is boarding soon and the limits of this post are not going to be set by the internal limits of what I could say about going back to my work but rather by the grumpy clock of the airline gate agents. For the time being, I will just post a wordle of the pdfs I haven’t read. The field of article titles I read gives a pretty good sense of my research interests: 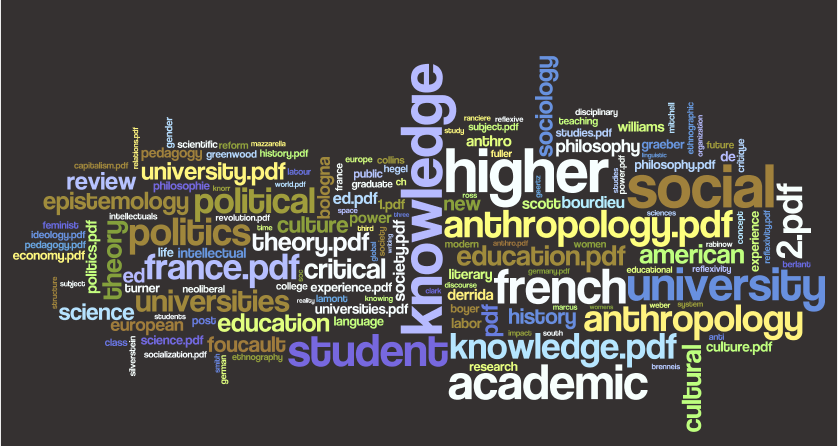