I grew up partly in a college town, and I’ve been around college campuses most of my life. One of my favorite times of year is this late-summer empty moment that happens after summer sessions finish and before classes start for the fall. It’s peaceful; you get a clearer view of the space.

Here’s what Whittier College looks like this time of year.

END_OF_DOCUMENT_TOKEN_TO_BE_REPLACED

A friend of mine recently asked if I knew anything about the history of the college quad as a place of free speech and debate. I didn’t, but I’ve done a tiny bit of research in the last couple of days and the results are interesting. Among other things, I observe something of a historical transformation in the scholarly literature: an older era’s work concentrated mainly on college architecture as an aesthetic form in itself, tracing the origins of campus buildings and the progress of architectural styles. Many campuses have their own histories; they are often adapted to the rhetorical needs of campus self-promotion and self-consecration, the sort of thing written by loyal emeritus professors to please the president. On the other hand, a more recent, more modern, more critical literature takes up a different problem, that of the university’s relation to its town, to its broader environment, to its social context; this research tends to be darker, looking at university’s sometimes problematic involvement in urban development, in racial exclusion, in slum clearance, in gentrification. I’ve posted before about Gordon Lafer’s history of Yale urban development and about Kate Eichhorn’s paper on the “abject zone” of copyshops around the University of Toronto — typical examples of this more recent literature.

I have a bunch of photographs of university quads to look at here, and some more recent articles from the U.S. context to think about, but to start off this new set of posts I wanted to begin with this extract from a History of the University in Europe. It offers a very suggestive picture of how universities began to acquire real estate in the first place:

“In the late Middle Ages, as student populations grew and universities ceased to migrate, universities acquired buildings and movable property. For a long time time in Paris and Bologna the administration had not needed to take care of buildings, because there were none. Lectures were held in houses rented by the masters, examinations and meetings in churches and convents. In Paris, however, both the theological faculty and the nations began renting property as early as the fourteenth century, and acquiring it in the fifteenth century. With lecture halls in the rue de Fouarre and many other places, with colleges and lodgings, and with churches (all of them on the left bank of the river), the Quartier Latin became the university quarter of Paris. The young Bologna studium, too, contented itself with private houses and religious or public buildings for lectures, meetings, and ceremonies.

Growing numbers of students, some of them very young and needy, made housing facilities more necessary as time passed. College buildings arose everywhere, but especially in universities with large faculties of arts, such as Paris, Oxford, Cambridge, and later on the German universities. Italian studia also looked for lodgings for their students. The comparatively few colleges in northern Italy were founded in and after the fourteenth century, at first in converted private homes. After 1420 a special type of building appeared, the domus sapientiae (house of wisdom) or sapienza, a teaching college modelled on the Collegio de Spagna in Bologna, built in 1365-7. The rooms were grouped around an arcaded courtyard. Gradually the sapienza ceased to be dwellings and in early modern times became the official university buildings with lecture rooms, discussion rooms, a library, rooms for accommodation and administration, archives, and a graduation room. The palazzo della sapienza became the current name for these sumptuous university buildings. (136-7) END_OF_DOCUMENT_TOKEN_TO_BE_REPLACED

A few months ago, Baptiste Coulmont posted a sarcastically titled video called “our beautiful university” that testifies to the squalor and physical deterioration of a university campus in the south of France, Marseille or Toulouse I think. It’s essentially a youtube montage of photos of decrepit university spaces; the photos are also collected at Picasa. 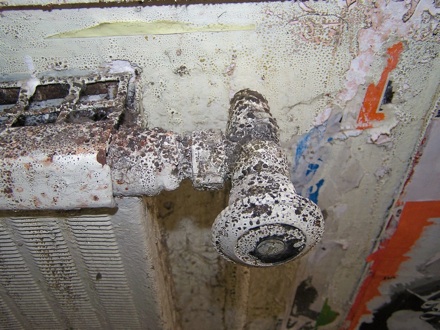 At times, the mold approaches the complexity of mountaintop lichens, or perhaps it’s more like a spontaneous display of abstract art.