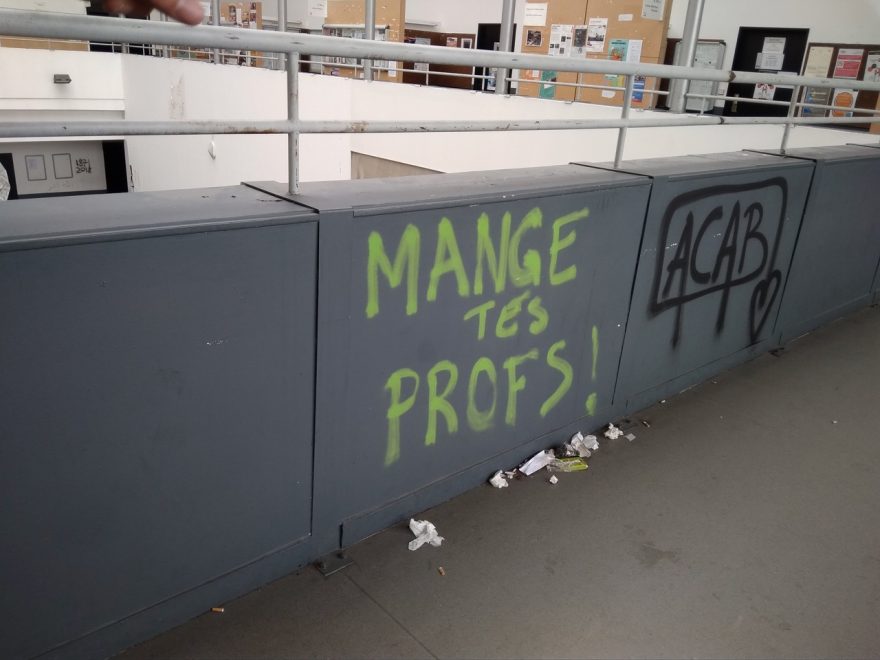 I read this yesterday at a really wonderful conference, Whose crisis, whose university?, which began with questions about the university and its relationship to carcerality, prison abolition, and abolitionist history in general. My little text is drawn partly from a longer paper I’ve written about sonic patriarchy in a French university department. The conference was also about criticizing the limits of the recently invented field of “Critical University Studies,” so I said a few words about that too.

My first thought about abolition is that it makes an immense difference just what we are trying to abolish. What, for instance, might it mean to “abolish left patriarchy” in academia? Etymologically, patriarchy is rule of the fathers, a regime of male power and patrilineal inheritance. One might thus see abolishing patriarchy as a destruction or cancellation of male power in general, or at least of propertarian gerontocracy and its self-assertions of grandiosity and naturalness.

But if we are ourselves products of a patriarchal academy (which is not only about cishet men; there are queer people who act like patriarchs), then the problem of abolishing patriarchy also becomes a problem of self-abolition. Who abolishes the abolitionists? Is there a form of political selfhood, an evanescent one, that is always en route to self-abolition? And why is it that, coming here to speak as a precarious academic, I feel a bit destabilized, a little obscurely sad, a little overwhelmed with the weight of — what is it? — of being a case of failed reproduction?

Is there any other kind?

Abolition as we have it in the conference invitation seems a bit threatened by the specter of its own excess. And yet it seems to me that abolition — as an effort to end slavery, incarceration, dispossession, capital accumulation, and the racial capitalist societies that produce them — this abolition is always incomplete, threatening to turn back on itself, only ever partial. As others have also evoked. “Proletarian revolu­tions criticize themselves constantly, interrupt themselves continually in their own course, come back to the apparently accomplished in order to begin it afresh, deride with unmerciful thorough­ness the inadequacies, weaknesses and paltrinesses of their first attempts.”

This brings us back to the problem of left patriarchy. Much of second wave feminism emerged historically out of a desire to cancel — to abolish — the massive sexism of the 1960s New Left. And in many quarters, these criticisms of sexism in “the movement” had a real impact. But the abolition of patriarchy in the New Left was, to say the least, never total. An abolition that went unfinished.

Even now in the aftermath of #MeToo, it is bitterly disappointing to see the patriarchy and toxic masculinism that still pervade significant swaths of the supposedly left-radical academic world. Personally, when I was a student, this was at its worst for me in various seminars on Marx, who I was just citing. These seminars always gestured towards general emancipation, but remained extraordinarily patriarchal in their pedagogy and their horizons of discourse. “Maybe Marx is just a guy thing,” one of my professors told me once when I complained. (As if Marxist feminism did not even exist…)

Meanwhile, among my feminist comrades, terms like “manarchism” and “brocialist” are now in fairly widespread circulation. These feminist terms of art pick out a specific contradiction: the contradiction that patriarchal power and masculine violence endure in academic spaces nominally dedicated to liberation and radical social critique. To name this contradiction — which we can call, with Tania Toffanin, left-wing patriarchy — is to deplore it and to want to abolish it. But perhaps we need to talk about how it works before we can cancel it. How does left-wing patriarchy endure, for example in a university department?

I have been writing about this lately, and what I found ethnographically, in one left-wing French philosophy department, was not auspicious. It was a historically male-dominated site. There were reports of cishet sexualization, objectification and harassment from certain male professors. There was also a more widespread mode of naturalized male power which we can usefully understand in terms of Rebecca Lentjes’ concept of sonic patriarchy. Lentjes invokes the notion of sonic patriarchy to draw attention to the way that academic patriarchy works through the senses. In neoliberal universities, Lentjes observes, patriarchy is not only a matter of the male gaze, but also of the domination of sound and of what is — and is not — hearable.

In the department I studied, I sometimes had the sense that I all I heard was patriarchy. Patriarchy in this site seemed to be durable because it worked simultaneously on several fronts. It was infrastructural, being grounded in demographic, citational, and institutional domination. It was normative, incorporating a set of masculine norms of conduct (even if these were polyvalent). These norms worked to exclude its Others (women and political conservatives). Far from being static, it was a conflictual system, and in its conflicts, patriarchy became something naturalized, visceral, and inescapable. At the same time, this visceral conflict mobilized many men’s existential desires for their established system to endure, even to flourish. I arrived ultimately at the disturbing thought that, at least in this particular university department in France, left patriarchy does not just automatically reproduce itself; rather, its continuation is actively desired.

The question of desire brings us back to the reflexive question of what it means to abolish left patriarchy, if that is not just an institution outside us but also is part of us. How do we distinguish the work of political transformation (as they call it in South Africa) from the socially determined compusion to rebel against our own patrilineages? How can we engage with a discipline, or imagined discipline (such as “Critical University Studies”), without invoking an intergenerational cycle of gendered melodrama?

Does abolition bring us answers or only new questions?