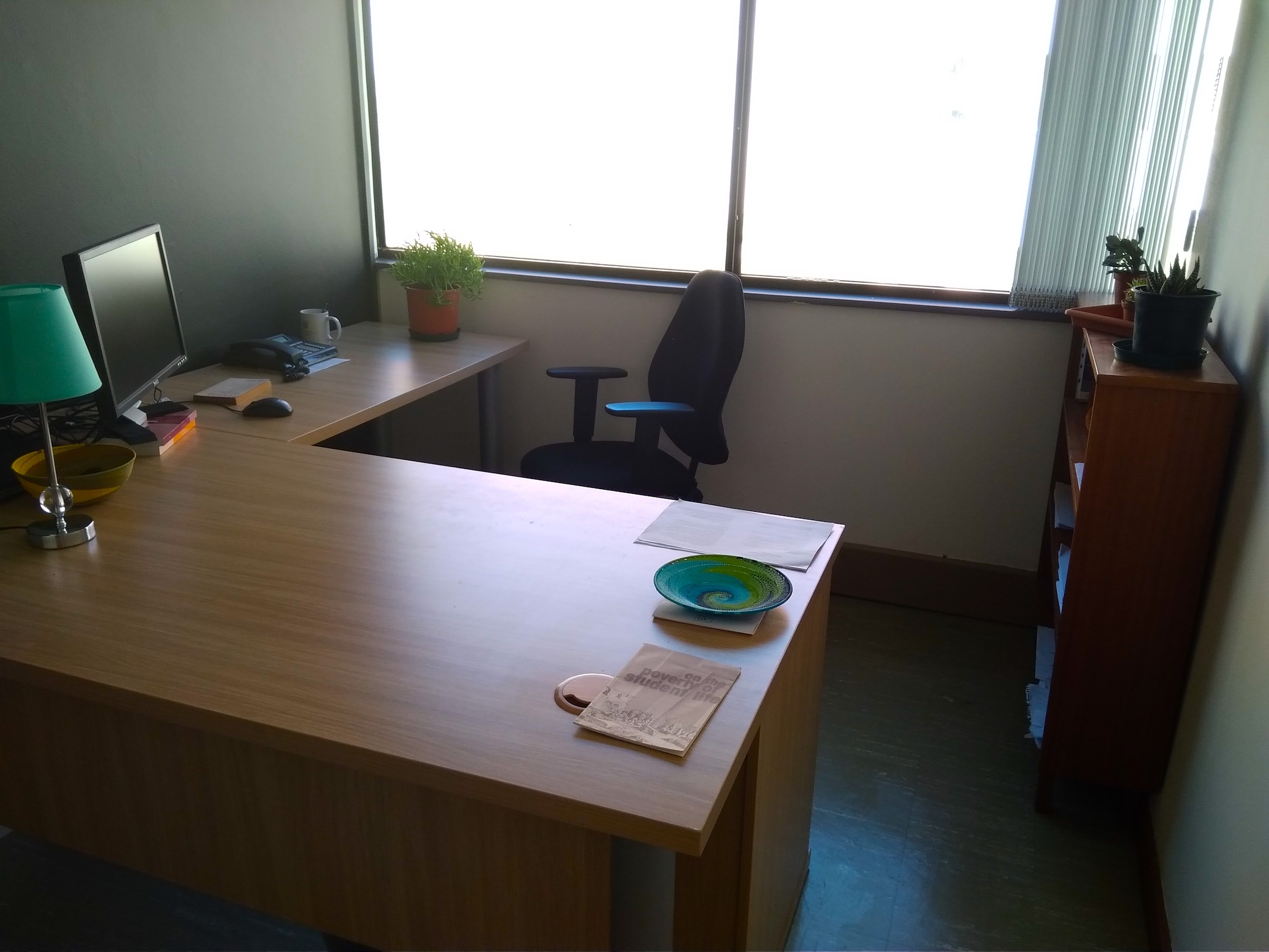 A little before seven, some sort of teacherly anxiety wakes me up before the alarm. Dim light slips through the blinds. From the obstructed view onto a garden wall, a row of bushes, and a westerly sky, I can’t immediately tell whether last night’s rain will continue.

Being a bit anxious makes it easier to get up and get moving.

I’m staying in a basement flat, not even really a studio, since it has no kitchen, but only a bedroom, all white, which I’ve never decorated except with lamplight. By the bed there’s a door to a cave-like bathroom, which has no window, but does have a cranky exhaust fan barely able to remove the accumulation of moisture. Often when I go out, I leave the fan on.

Today I get up and find my glasses and, without even having coffee, sit down at my jumbled desk in the next room. The next room is technically not my apartment, but rather a furnished basement belonging to the larger house where my landlords live. (I do share their kitchen and some of the other living space.) In the basement, my desk is stashed in a corner, with a ridiculous ergonomic keyboard (the Kinesis Advantage), some piles of papers and notebooks, and a bit of music recording gear.

Anyway, I have to teach today at nine, but I want to send an Important Email beforehand, so I spend a while writing that. I puzzle over the wording. I probably also procrastinate a bit with Facebook and the news, but eleven hours later, that’s already become blurry in my memory.

An hour goes by, and then I have to I rush through getting ready, pausing for a minute to puzzle about an outfit that feels sufficiently Teacherly. I find a gray sweater with a wide collar, a checkered shirt, and my black Doc Martens, which have acquired an obscure but real emotional function in my teaching practice. They aren’t quite a talisman, but when I do the kind of teaching where you stand up in front of the room, they keep me more steady and feeling, very slightly, more invincible. Honestly, I have never felt very invincible in a classroom, but it’s still nice to fortify yourself a little against the world. As if you could be held together by the look.

Then a happy accident: I have exact change for the departmental coffee machine (which costs R10, about 80 cents), so I can go straight to work, pausing only to pack an apple and a granola bar. It’s after eight, and my bike tire needs air, so I risk driving — it is essentially a five minute drive without traffic, but sometimes traffic is quite slow in this small city. My lamentable current rental car, a Volkswagen Citi Golf, doesn’t like to start; often it stalls after ignition. If you give it more gas right after it starts, it seems to warm up after five or ten seconds. I haven’t driven stick for years, and I’ve gotten rusty about car coaxing techniques.

Soon the car is coaxed down the hill, past the fancy private schools, over the little river, past the Helderberg dormitory, past the town square. The pedestrians negotiate via hesitant glances over whether they will cross the street right in front of me. Once I make it to the Arts and Social Sciences building, I have about 25 minutes to put down my things, gulp my vending-machine coffee, print out my teaching materials, and chat with my colleague, R., who has generously agreed to co-teach with me today.

This month I’m teaching a short-form version of ethnographic methods, which meets for three hours, twice weekly, from 9am to noon. The class, for students in a 1-year graduate degree program called Honours, is technically called “qualitative methods,” but really I am trying to teach a class about what it means to interpret social situations. In the end, it’s not just “how we gather research materials,” it’s also what we make of them.

Well, here’s an interpretive question that I don’t know how to answer. At the door to the classroom, two minutes before nine, I find the students all clumped up in the hallway, waiting at the locked door to the classroom. Since my office is ten meters down the hall, I wonder why they didn’t come ask me earlier to help get the door open, instead of having to wait outside. But probably they sensed that opening a locked door was not their problem.

I get the door open, and people inside. It’s a room I haven’t taught in before: a “board room” with a massive oval table that keeps people facing each other, but far from each other. Everyone sits as far away from me as possible, but as the later arrivals show up, the gaps fill in.

We have a long and somewhat emotionally-intense-for-me class session on how to do interviews. It’s intense because I have never actually co-taught a class before, and it turns out that I have some minor but real disagreements with my coteacher, R., about interview technique, and about time management in the first part of class. He’s a lovely person and I instantly feel very guilty for my maladroit efforts to limit the time we spend on an opening discussion.

Here was the plan for the three hours of class (as I prepared it in advance):

Amazingly, we mostly stick to the schedule. We only have about twenty minutes for the closing discussion, where I do a go-around to get everyone talking. By the time everyone has commented on their interviews with their classmates, class is just about over. We’ve largely tried to stress that interviewing demands real rapport, but it occurs to me at the last minute that, ethnographically, you can also learn a lot from awkward or interpersonally unpleasant moments. So I tell a story from my own fieldwork about that, but it’s a story about a somewhat dark moment, and I wish afterwards that I’d told something more light-hearted, to avoid ending class in a crestfallen mood.

It’s always hard to know what moods mean in the classroom and how they matter. But for me, when I’m teaching, often moods are all I have to go on when I’m there in the moment. So I do feel concerned that they are relatively positive.

It was also an intense class because when my colleague interviewed me in front of the students, he chose for his topic “Eli’s first impressions of Stellenbosch.” My first impressions of this place were quite overwhelming, having gone straight to a job interview from a 25 hour flight, and finding the city to be a beautiful, but quite racialized and unequal place. And while I could have decided to answer the questions a very guarded way, I decided to be fairly open, to not pay attention to the room of students watching us, and to look only into the eyes of my interviewer. At one point I remarked that there was a certain “masculinity of power” at the university, and then, like a good interviewer, R. asked what I meant by that. I found it hard to tackle a huge question like that without collapsing into a super academic register.

Afterwards, the students asked a very reasonable question: “Why did you still respond to questions that made you uncomfortable?”

There’s really no good answer to that. Sometimes we don’t extricate ourselves from awkwardness. Eventually, I say I think questions follow a logic like that of gift exchange, so that it’s just ritually hard to not respond to them, or even reciprocate.*

Anyway, after class eventually ends, time gets a lot more unstructured, and less hurried. I chat with my colleague quite a bit about how our class went. He liked it, he says, which I’m happy about, since he’s been teaching research methods for quite a while, and is a hard act to follow.

My memory gets vague about the rest of the day. I walk down the block and buy lunch at a grocery store; I do some classroom admin things; I chat a little bit online to my friend who teaches linguistic anthropology on a different continent; I feel overwhelmed by life but relieved to be done with class; I’m touched by the energy and seriousness of the class as a group; I leave my office door slightly open so that I can sense the flurries of motion in the department hallway.

As evening sets in, I sit down at my desk and write this, because I think it’s still valuable to have documents about everyday academic life. Now it’s quite late and everyone else has long since gone home. But since my family isn’t here in South Africa, I can indulge in working odd hours.

That is one version of a teaching day. Outside, it’s pitch black but the sky is clear and full of stars. I drive my little car home.

* Credit where it’s due: I think I got the analogy between questions and gift theory from a paper by Esther Goody, I suspect “Towards a Theory of Questions” from 1978, but I only ever had a photocopy and now I can’t find it to check!