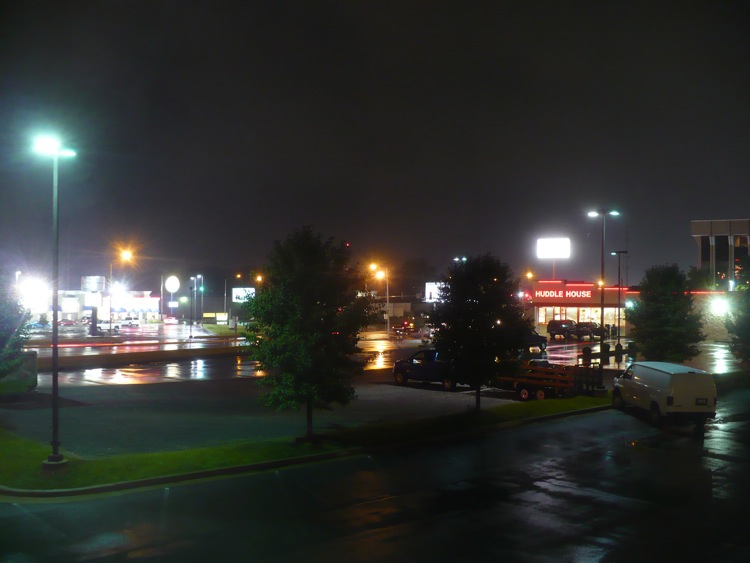 Back in 2011 I went for a bike trip in southern Illinois and made it just across the river to Cape Girardeau, Missouri. I wrote about my trip at the time but I’m embarrassed to say that I mainly saw the place in terms of class — it was a largely run-down, working-class place — and, in racial terms, I only noticed that it was largely white.

It turns out that Cape Girardeau was just in the news, in a Guardian report on rural racism in America. A lodging house in town was once included in the Green Book for Negro Travelers, a historically important guidebook telling black people where they could safely travel in the United States. But Cape Girardeau is nonetheless a highly racist place.

In the latest Guardian report, it becomes emblematic of the experience of driving while black:

For younger African Americans, racial profiling by police has become the new frontline in their experience of driving while black. Marshall Egson, whose family owns a large colonial-style house in Cape Girardeau, Missouri, which was listed in the Green Book, likens the cumulative effect of being stopped over and over again by law enforcement to post-traumatic stress disorder (PTSD).

“Every time I go out in my car I worry: am I going to make it home?” he says. “Over time it gives you PTSD. The way I see it, most every black man in America has PTSD.”

As the road miles of my tour of Missouri pile up, past and present seem to elide. When did the Green Book end and the present begin? Has there ever been a break?

I kick myself as I read this for not having had the political consciousness to have even looked into race in this town before writing about it. The stories are there to find.

For instance, in 2005 there was a rally against racism at the local hospital, which was reported on IndyMedia:

In July 2004, I lost my mother, my best friend to blatant discrimination and negligence from a very oppressed and racist hospital. After several attempts of trying to resolve this matter peacefully with the hospital, all efforts where ignored. So on March 26, 2005 my family along with the National Alliance of Black Panthers gathered in front of St. Francis Medical Center in Cape Girardeau, Mo to protest in a peaceful manner. We wanted to shed light on the past events of racism and unfair treatment of African Americans, as well as Minority Medicaid recipients.

According to Holli Wrice, who wrote the report, the city police rapidly tried to halt the demonstration:

During our peaceful protest, a police officer came to our demonstration and told us not to use the bullhorn, and stated this was against city ordinance. Sistah Shazza and myself demanded to see the ordinance rule. (Allow me to mention that The NABP as well as myself had contacted the Police Department prior to the demonstration, to see what measures we can take for such usage of the bullhorn, and obtain a permit and etc). The Officer told us if we continued to use the loud horn, he would lock all of us up.

The protesters were also subject to acts of overt racism, on Wrice’s account, beginning with a threat of vehicular homicide by the KKK:

Several hours into our peaceful protest, the Ku Klux Klan drove a truck as close as they could to us repeatedly coming very close to the curb in which we were standing. They yelled niggers; all the while they drove their pickup with a huge confederate flag waving from the rear of the truck. Some of my family went to a nearby restaurant and they were called niggers. Employees from the hospital showed their nametags and gave us the middle finger.

Wrice eventually concludes that “Racism still exists and is very thick and blatant where I reside, here it is 2005 and you still have white supremacists sporting Klan uniforms, Man, I need to tell them that is played out now, times are changed. America is still ass backwards, its up to us to keep the dream alive and going.”

A few years later in 2012, the KKK (defended by the ACLU) won a court case against the city to gain the right to leave flyers on people’s cars.

The racism that affects a town is of course almost certain to affect the local university. So it’s not surprising that the local college, Southeast Missouri State University (SEMO), is associated with similar dynamics. (I’m not, of course, claiming to be an expert on SEMO or to be giving an exhaustive analysis of it. What follows is just what I can find out with a bit of online research.)

A recent analysis of language use on Twitter named SEMO #1 in the nation for frequency of “derogatory” speech, based especially on frequent use of the word “bitch.” The survey was methodologically controversial — and denounced by the college itself — because it consisted purely in a statistical analysis of the spatial proximity of derogatory language to the campus, without considering context or verifying that students were the ones doing the tweeting. But while the data is obviously a very indirect measure of campus climate, if you ask me, it definitely says something about local prejudices.

Local reporters in any case readily corroborated the findings. One Twitter user commented that “SEMO is super racist”; another person showed that students from the campus were advertising a “slave auction outside the university center.” Meanwhile, about two years ago, one student started an online petition (with 81 signatories) to denounce his teacher’s “hate filled racist rant blaming people of European ancestry for the plight of those of African ancestry.” (What specifically was said?) A 2016 Black Lives Matter exhibit was defaced with a pro-police message. And in a Facebook group “Living at Southeast,” efforts to discuss racism were shut down by school administrators.

A few years earlier, in 2013, an online forum discussion about whether SEMU is racist generated this response from someone in Cape Girardeau named “Nazi pride”:

“Black women r disgusting and mostly bald lol even black men kno white women are way more beautiful that’s y there always trying to bag one the white race is the apex of beauty and knowledge we tought u how to read write your welcome btw without us ud be wearing loin cloths chucking spears at elephants.”

In a remark like this, the level of racism and white supremacy is so extreme, it’s hard to even notice the exceptional stupidity that goes with it.

Meanwhile, liberals wrote to the newspapers in the wake of Ferguson with thoughts like, “As a lifelong Missouri resident, I’m sad that our state has gotten a racist reputation… I know most of us aren’t racists and are sad that Missouri has been labeled as a racist state.” As if racism was just an image problem and not about contesting white supremacist discourse and practice on the ground.

This brings me to my mea culpa as a scholar of higher education. When I went to this town in 2011 — admittedly I was just passing through, but still — I didn’t ask the right questions or look in the right places. And I completely missed the racial and racist dynamics that hang over this town, and over its local university.

It’s an analytical mistake I don’t plan on making twice.

Edit: I see that some people from SEMO are perhaps reading this post! I’d welcome additional commentary, corrections to my impressions, or any other feedback.