The University of Paris-X at Nanterre is now just called Université Paris Nanterre. I went there this week to poke around in the archives of my fieldsite. On the way to the library I stopped to find something to eat, and it turned out that the nearest campus eating establishment was an ethnographically useful site. Admittedly, I am getting somewhat out of practice as a campus ethnographer, but I still noticed a few things. 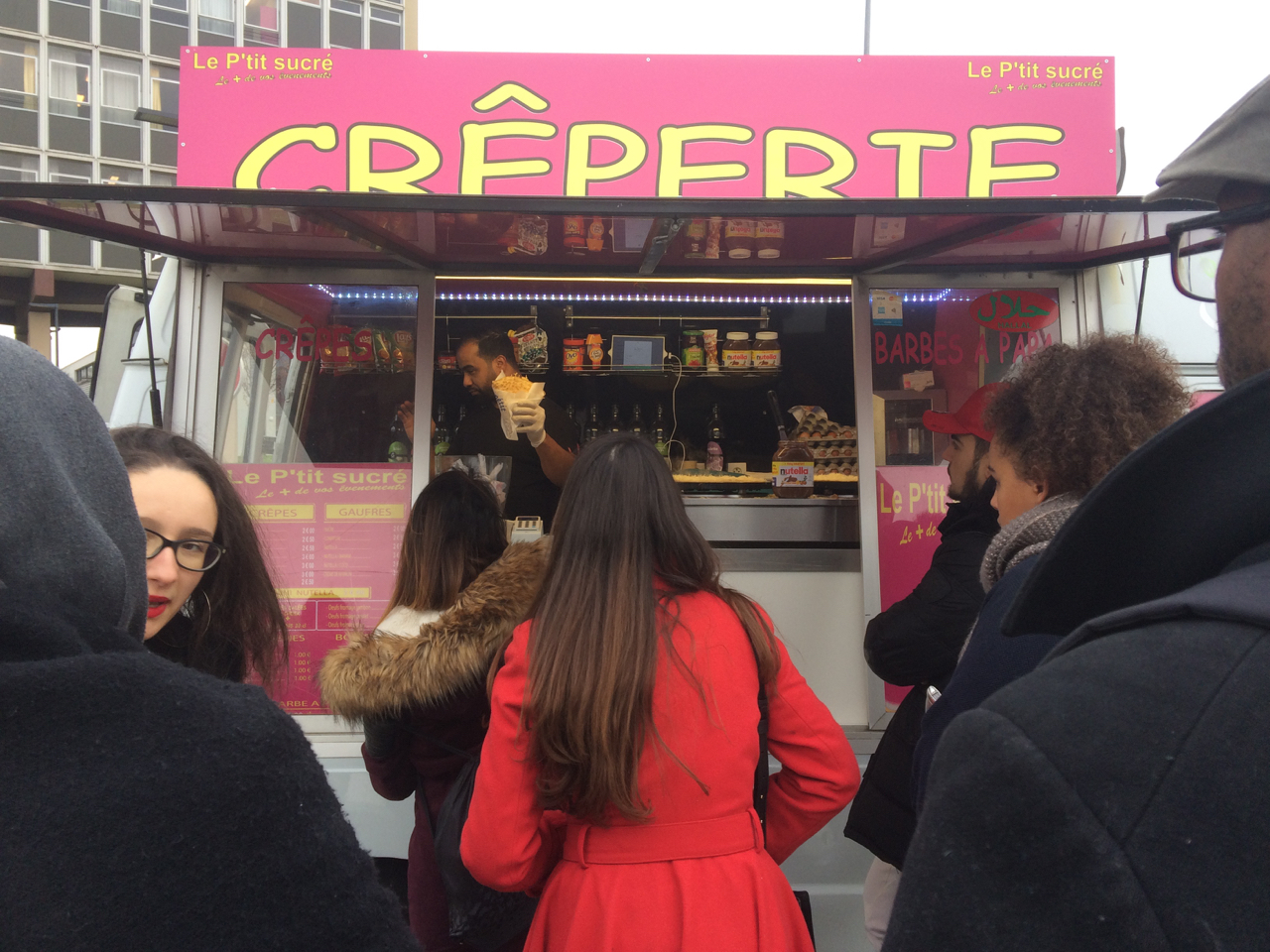 The business consisted in a white van kitted out as a crêpe-making stand. The side of the van folded up into an awning, exposing a window through which food and money were flowing swiftly, in opposite directions. I hesitated before committing myself to the queue, which was quite long, but there was no other obvious place to eat at the entrance to the campus, and I suspected that the truck’s popularity was a promising sign.

The truck was the occasion for two overlapping social situations: the students waiting in line and the actual scene of crêpe-purchasing transactions. The student clientele struck me as fairly representative of Paris-area humanities-and-social-sciences: majority women, quite racially diverse, and dressed largely in long black coats, which have been the normative cold-weather apparel as long as I have been acquainted with the Paris region.

There seemed to be some gender dynamics at work. Sociability seemed to cluster around groups of women students (two or three or four at a time), while solitude seemed a more masculine performance (I saw more male students waiting by themselves). I was reminded, overhearing students’ conversations, that it’s not just the ethnographers who are outsiders on university campuses: I heard two students having a long discussion about which building was which, as if not everyone had a clear knowledge of campus geography. Meanwhile, student sociability didn’t seem too affected by ethnoracial differences, on any level that I could immediately observe.

(I don’t, incidentally, know absolutely for sure that these people were students; I didn’t ask. But their fashion choices, their markers of social class, their youth, their backpacks, their casual socializing, and their proximity to the campus seemed conclusive. Ethnography demands leaps of interpretation.)

The customers who were there with friends were obliged (normatively) to bid them farewell as they left the site with their food. This entailed standard French departure rituals, which could hypothetically have entailed la bise, the ritual kiss, which is common in friendship contexts involving women. Presumably it takes a bit of effort to faire la bise [kiss], and I noticed a shortcut: one woman announced to her friends “bises!” [kisses] instead of actually making the gesture in question. Standard French practice when you’re in a group, I suppose, but it also reminds me of the way you would sign a letter to a friend. In that sense, the verbal exclamation “kisses!” seems to hint at a takeover of physical interaction by writing. The becoming-prose of the world.

On the other hand, perhaps one should say instead that these little moments of sociability were a sort of “found poetry,” secreted within the lines of an otherwise pretty hasty commercial exchange. You had to pay before you got your food: the staff would tell you what you owed when they had a moment of downtime, as your crêpe was cooking. There were two cooks, each making three crepes at once. Curiously, the place billed itself as being dedicated to sweet crêpes (“Le P’tit sucré”) but in reality almost everyone (80%+) wanted savory food. Lunchtime.

More to say about commercial exchange in this site, but for now, I’ll just leave a few other images of the scene.

To the left, a large plaza leading towards campus. 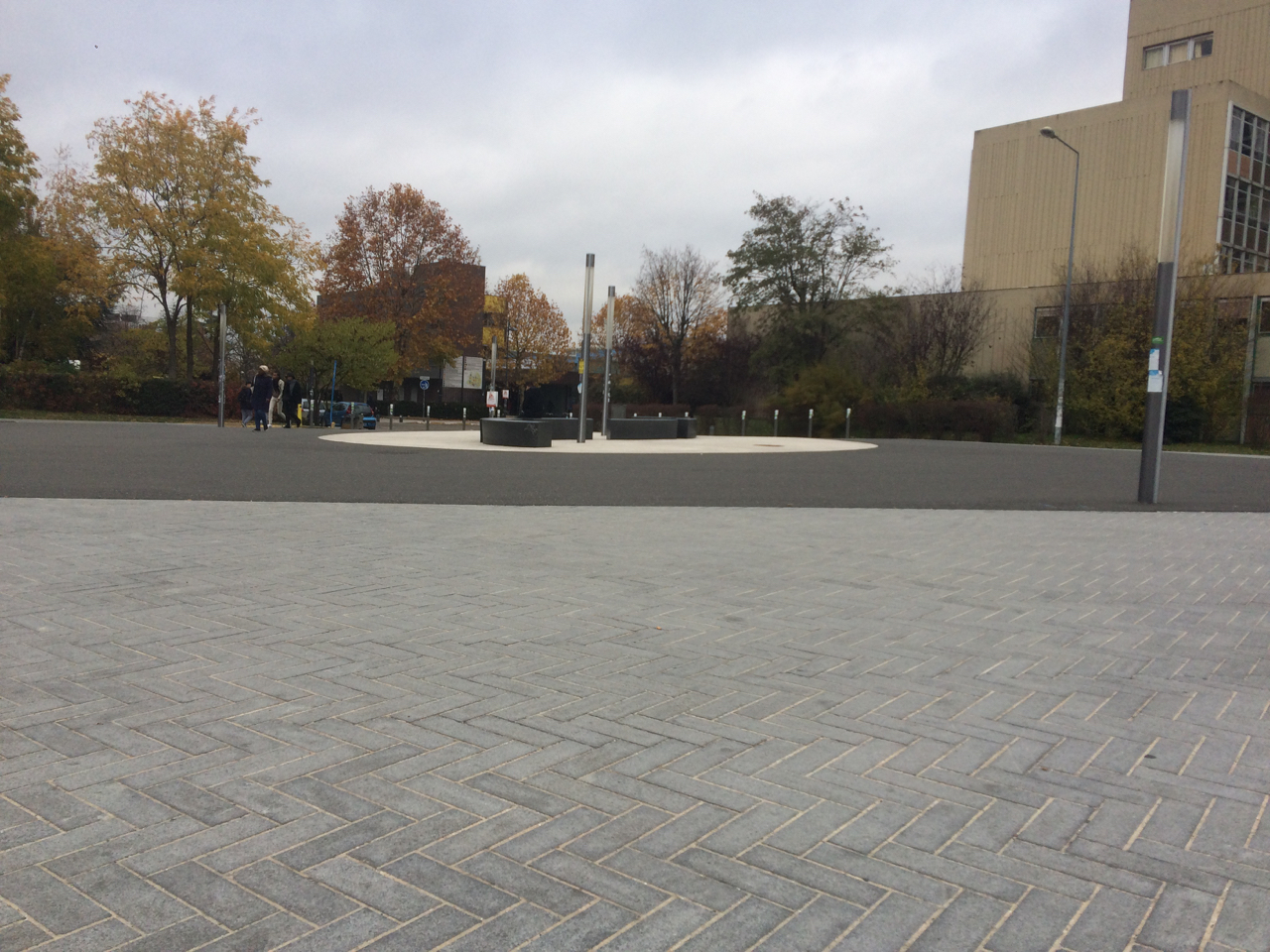 Twenty minutes later the scene by the truck was very empty, as lunchtime died down. 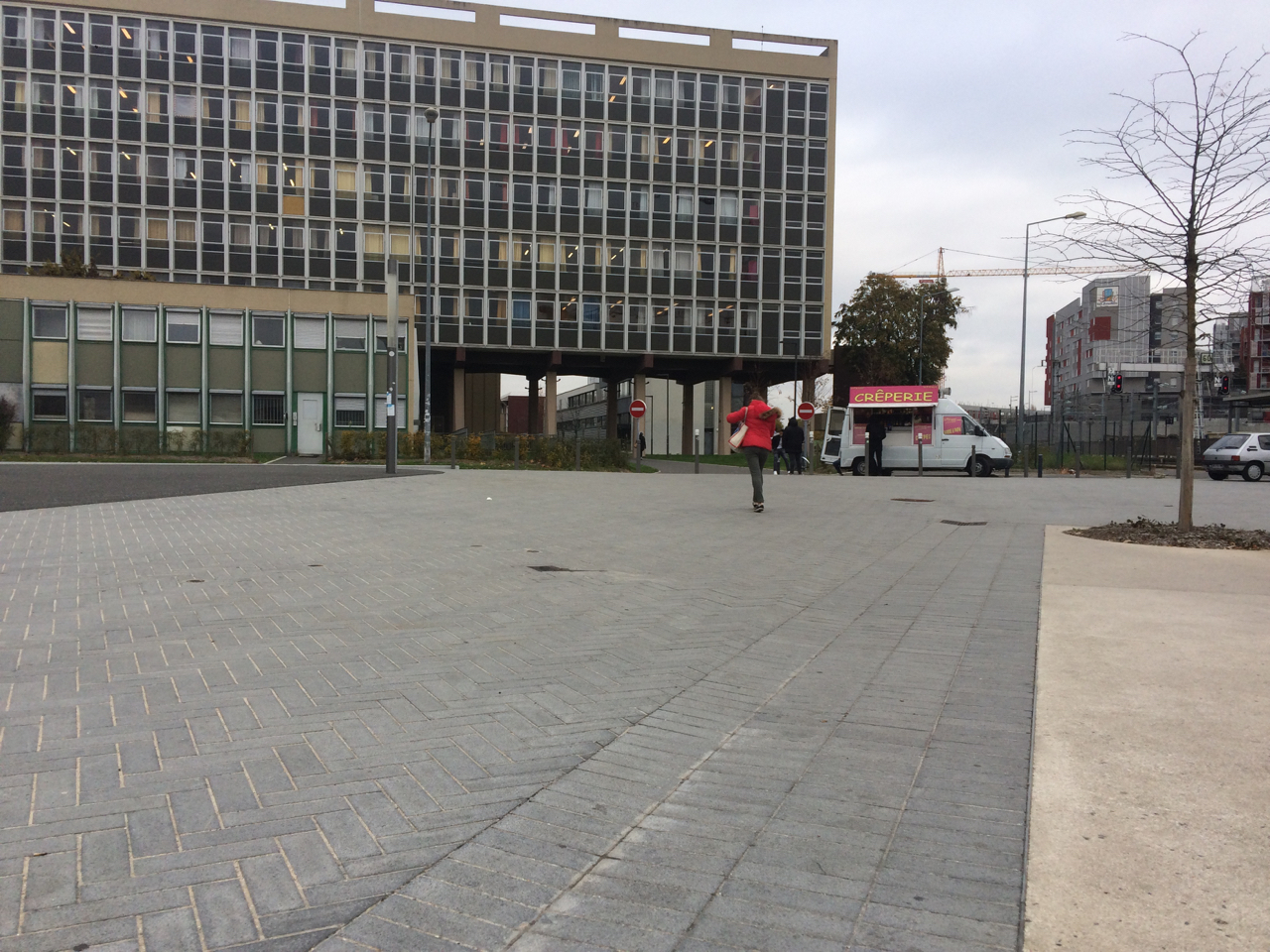 But new waves of people were regularly disgorged from the suburban train station. 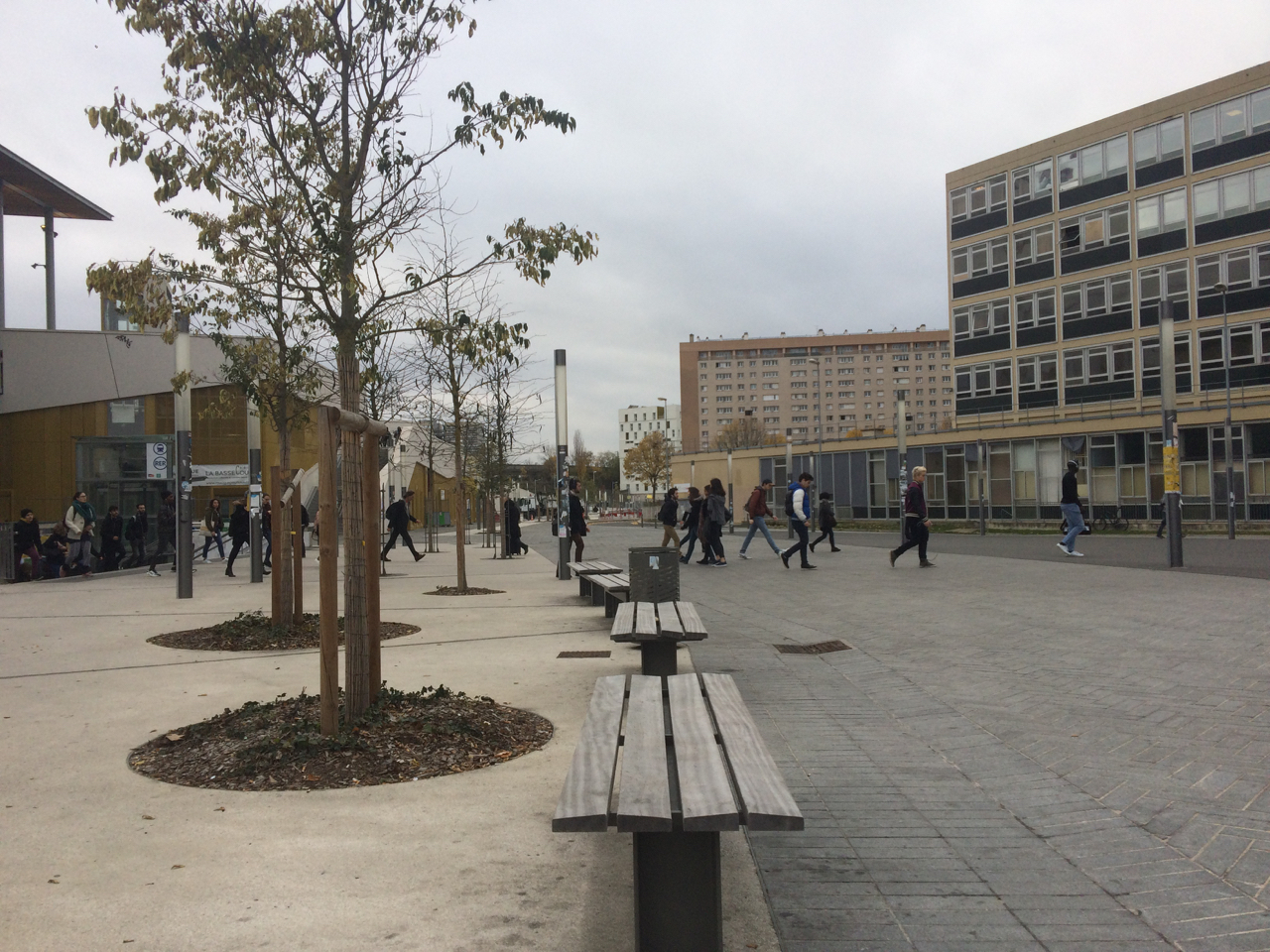