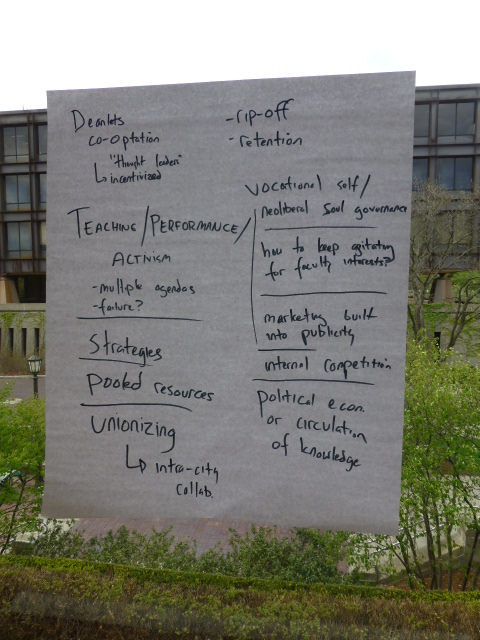 I just got home from a great panel on “Re-Creating Universities Through Critical Ethnography” at the Society for Cultural Anthropology Meetings. It was organized by Davydd Greenwood, who was my teacher in college and has been working on anthropology of higher education for longer than I’ve been an academic. We also had Susan Wright, who’s worked on European higher education reforms since the 1990s, and Wes Shumar, who became a prominent critic of commodified higher education with College for Sale.

Davydd is known best for doing participatory action research, so naturally we wanted to devote half of the panel time to working collaboratively with the audience. We planned to ask them questions like these:

We were also hoping that, after sharing our presentations with the audience, we could engage them in trying to collectively generate new questions, new research agendas, and new strategies for re-creating universities. That didn’t entirely work out. What happened instead was experience-sharing – the crowd was small enough that everyone could take a turn at describing their own institutional circumstances and dilemmas. This turned up a wide range of situations, everyone from graduate student unionizers and undergraduates to junior and senior faculty. Correspondingly, the participants shared a wide range of strategies for intervening in their institutions: everything from open-source publishing advocacy to arguing over budgets to militant faculty committee politics. (I did notice, incidentally, that graduate students were under-represented in the audience compared to the conference public in general; I’m not quite sure why.)

But I was left wondering more than ever about the risks of specialization in anthropological work on universities. We — the panelists — were there in a double role: as facilitators of collaboration, but also as experts on the panel topic. I came away feeling that these two roles were more in conflict than one might hope. One might even say, abstractly, that the usual logic of expertise is at odds with the logic of collaboration – “expertise” seems to name a vertical relationship (the most knowledgeable people are privileged) while collaboration hopes to be more horizontal (everyone brings something to the table). Of course, this doesn’t have to be a problem in practice; there are ways of using expertise more collaboratively, less hierarchically. Still, I came away from our panel thinking that we were overly optimistic in asking our audience to instantly talk like higher education researchers, suggesting new research agendas. We said we were hoping for collaboration, but I think we may have wanted something more. Perhaps we had hoped that they would act as our peers.

There’s a logistical element here that’s worth noting. Collaboration, as Davydd reminded me, takes a large investment of time and energy, and it was probably unrealistic to expect a new form of interaction to emerge in the space of 90 minutes. The traditional logic of expertise, by contrast, is a script that academics are automatically trained to practice. In a traditional conference panel, you don’t need to spend time figuring out how to interact, because you come in with a set of expectations and habits that presuppose you to participate in the usual logic of deferring to expert knowledge. It’s efficient not to challenge these habits.

In the context of doing critical research on university institutions, this is worrisome. Surely the point of a critical anthropology of universities is to help improve these institutions by working broadly with their denizens. In that context, it would be a terrible irony if we ended up producing narrow expert knowledge in the usual disciplinary mode. (Or at least, if this were mainly what we produced.)

If we’re not to end up there, I think we may need to work harder at figuring out how to interrupt the usual logics of expertise even when they help bring attention to our work.

Posted on May 24, 2016May 24, 2016 Posted in professional lifeTagged anthropology of universities, conferences, expertise

3 thoughts on “The risks of expertise in studying higher education”