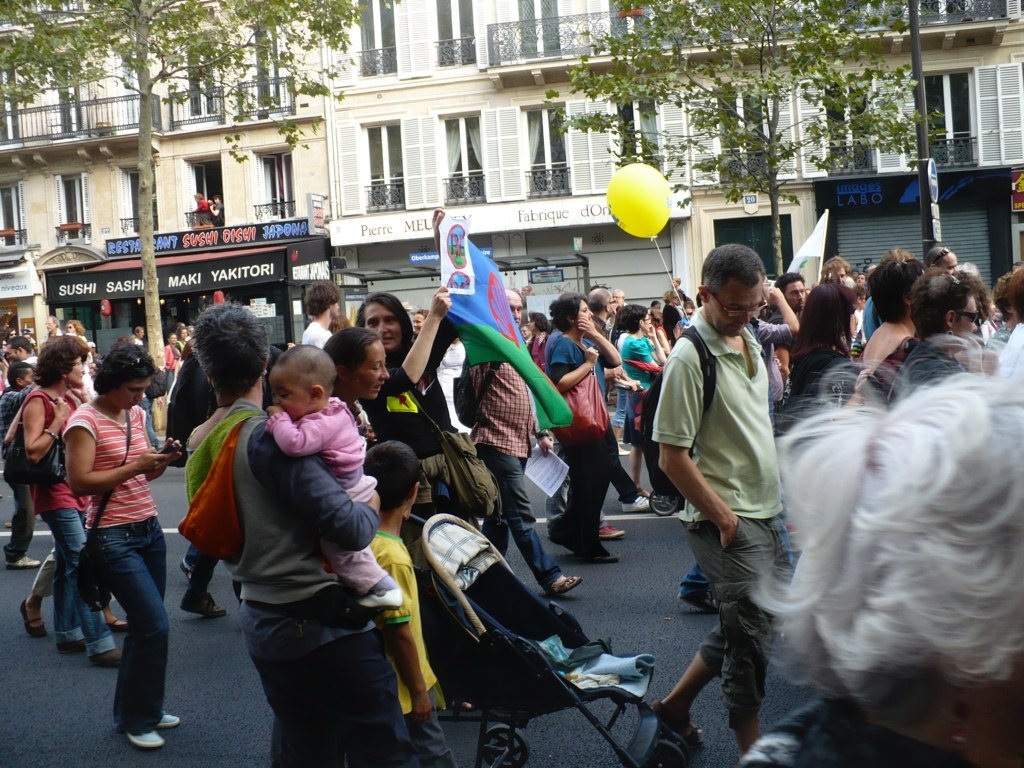 So over in France these days there’s a pretty major protest movement against efforts by François Hollande’s Socialist Party government, and its current Minister of Labor Myriam El Khomri, to reform French labor laws. These reforms go in the general direction of “fewer protections for labor, more flexibility for employers,” and the details are still being negotiated, in the face of substantial public pressure. The reforms, however, have not received a great deal of coverage in the English-language media, and what there is seems to be more about reproducing worthless stereotypes about French culture than about any actual analysis. I was going to actually write about the protest movement today, but instead I got distracted by an embarrassingly bad article in today’s New York Times, which begins with the following attempt at comedy:

It was published several years ago, but a cartoon on the front page of the French newspaper Le Monde roughly summed up the situation across the country last Thursday when several hundred thousand public employees and students went on strike.

“What if we went on strike for nothing,” asks one demonstrator in the cartoon, which appeared in 2010 during one of France’s periodic strikes. “Ah! Not a bad idea,” another answers.

OK, so the premise of the article is that this is a strike that is basically “for nothing.” The title, incidentally, was “Crippling Strike in France May Have Been About More Than Labor Law,” in case you were in any danger of taking seriously the political issues at stake here. The journalist — Celestine Bohlen, apparently a former European bureau chief for the Times — thereby makes clear from the first that the article is going to be organized around a smug, dismissive, and depoliticizing interpretation of French politics, as if strikes were simply a sort of periodic, dysfunctional gag reflex in the body politic.

One might think that such a dismissive interpretation was better suited for a 160-character tweet than for a 20-paragraph article. But the author is nothing if not dedicated to driving her point home; practically every paragraph is designed to reinforce this nonsensical thesis that French protest is not about politics, but is some sort of affective or cultural symptom.

Thus after the introduction, Bohlen proceeds to remark that “the strike had less to do with the intricacies of the labor law than with a deepening disaffection, particularly among young people, with Mr. Hollande’s government.”  This is patently false, given that the protesters have, in fact, produced a quite detailed item-by-item analysis of the proposed law (at the amusingly titled site loitravail.lol), even tagging various proposals according to their current political status (the “withdrawn” proposals are presumably cause for celebration). I also saw a handy 5-minute YouTube synthesis of the issues making the rounds, which is, albeit quite enthusiastic, also decidedly interested in the substantive details. But Bohlen, seemingly indifferent to any of this, gives her readers the impression that it is all a matter of “disaffection” — i.e., an affective state — rather than any substantive critique.

Bohlen goes on to deploy an impressive apparatus of trivialization, calling the strike only “nominally in protest” against the labor reforms, arguing that students and public employees are not appropriate political subjects, complaining that the demonstrators’ protest signs only “sort of” explained their arguments, denouncing the supposedly small size of the demonstrations, calling the message “confused,” and reducing the strikes to a purely symbolic “show of force.” Let’s look at a couple of these points in more detail:

“The demonstrations hardly stack up against some of Paris’s famous protests, which have drawn crowds of a million or more,” comments Bohlen, citing the police estimate of 28,000 protesters in Paris on March 31st. Such a diminutive analysis is altogether tendentious, given that the police figures are always a lower bound; that protests have been going on for weeks; that occupations of universities and public space are ongoing, along with social media campaigns; and that significant police violence has been inflicted on protesters. In the university system, it is the largest protest movement since 2009.

Bohlen also remarks, in the service of discrediting the political subjects in question: “Those who took to the streets… were mostly public employees and students, two groups with the least to lose if the French Parliament adopts the proposed changes to the labor law this spring.” She rapidly adds a quote not from any participant in the movement (indeed, she appears to have not spoken to any participant in the movement), but rather from a random TV viewer:

“In what kind of country do public employees, whose jobs are not affected, take to the streets with high school students, who don’t have jobs but are worried about their retirement?” asked one viewer in a text message sent to the televised debate Thursday on TV5.

One would have to be entirely clueless about the French labor situation to imagine that students and public-sector workers were set apart from precarious labor regimes. To be sure, French state functionaries have job tenure. But there are tens of thousands of contract workers in higher education alone, often mistreated and irregularly hired; as these precarious employees say in their latest call to action, “We are already the future that the El Khomri law is preparing for us.” It’s not clear to me yet how or whether the El Khomri laws would directly affect contract work in French public education (and this may change, in any event, as the university system is increasingly “autonomized” from the state apparatus, and as its workforce becomes increasingly non-tenured). But what’s obvious is that Bohlen is oblivious to the widely-shared set of French concerns about precarious employment. As for the students — the French term étudiant means university student, incidentally, although high school students, lycéens, are also protesting — it suffices to note that in 2013, 45% of French students were also workers (in some capacity). We might reasonably suppose that many of these students are working in low-wage precarious jobs and might have a material interest in changes to their labor regulations, in spite of Bohlen’s classist assumption that students don’t work.

In any event, after its imprecise and dismissive summary of the protest movement, Bohlen’s New York Times piece concludes by reading the strike in terms of a general hostility towards François Hollande, noting that it “does not augur well for Mr. Hollande’s chances in the 2017 presidential election.” In case you had forgotten, then, the Times is here to remind you that what really matters is not the precarity of some anonymous worker in danger of losing their guaranteed time off when there’s a death in the family, but rather the precarity of great men, or at least of national leaders and their political careers.

One should avoid reading the New York Times’ coverage of French mass politics, I would conclude. It appears to be ideological in the worst sense.

One thought on “American representations of French social movements”