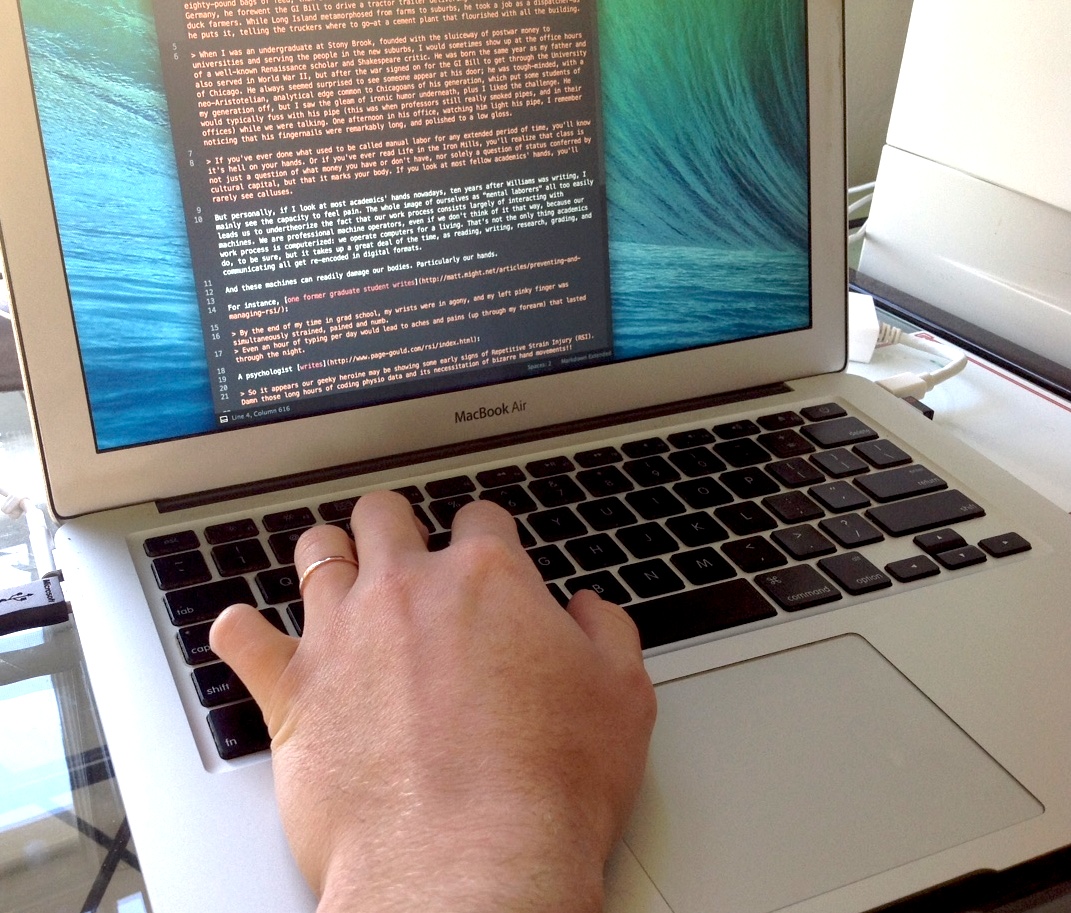 Jeffrey Williams wrote in his excellent essay Smart that academics’ hands are remarkable for their contrast with working-class hands:

My father has a disconcerting habit, especially for people who don’t know him, of pointing to things with his right pinky. Why it’s disconcerting is that his pinky is only a stub. Its top half was sheared off on a conveyor belt while he was working in a feed mill that supplied the many duck farms then dotting a good part of Long Island east of Queens. As a teenager in the early 40s, he loaded eighty-pound bags of feed, then after coming back from driving a half-track across Africa, Italy, and Germany, he forewent the GI Bill to drive a tractor trailer delivering those eighty-pound bags to the duck farmers. While Long Island metamorphosed from farms to suburbs, he took a job as a dispatcher—as he puts it, telling the truckers where to go—at a cement plant that flourished with all the building.

When I was an undergraduate at Stony Brook, founded with the sluiceway of postwar money to universities and serving the people in the new suburbs, I would sometimes show up at the office hours of a well-known Renaissance scholar and Shakespeare critic. He was born the same year as my father and also served in World War II, but after the war signed on for the GI Bill to get through the University of Chicago. He always seemed surprised to see someone appear at his door; he was tough-minded, with a neo-Aristotelian, analytical edge common to Chicagoans of his generation, which put some students of my generation off, but I saw the gleam of ironic humor underneath, plus I liked the challenge. He would typically fuss with his pipe (this was when professors still really smoked pipes, and in their offices) while we were talking. One afternoon in his office, watching him light his pipe, I remember noticing that his fingernails were remarkably long, and polished to a low gloss.

If you’ve ever done what used to be called manual labor for any extended period of time, you’ll know it’s hell on your hands. Or if you’ve ever read Life in the Iron Mills, you’ll realize that class is not just a question of what money you have or don’t have, nor solely a question of status conferred by cultural capital, but that it marks your body. If you look at most fellow academics’ hands, you’ll rarely see calluses.

But personally, if I look at most academics’ hands nowadays, ten years after Williams was writing, I mainly see the capacity to feel pain. The whole image of ourselves as “mental laborers” all too easily leads us to undertheorize the fact that our work process consists largely of interacting with machines. We are professional machine operators, even if we don’t think of it that way, because our work process is computerized: we operate computers for a living. That’s not the only thing academics do, to be sure, but it takes up a great deal of our time, as reading, writing, research, grading, and communicating all get redirected into digital formats.

And these machines can readily damage our bodies. Particularly our hands.

By the end of my time in grad school, my wrists were in agony, and my left pinky finger was simultaneously strained, pained and numb.
Even an hour of typing per day would lead to aches and pains (up through my forearm) that lasted through the night.

So it appears our geeky heroine may be showing some early signs of Repetitive Strain Injury (RSI). Damn those long hours of coding physio data and its necessitation of bizarre hand movements!!

The critical geographer Jeanne Kay Guelke wrote in her 2003 Road-kill on the information highway: repetitive stress injury in the academy:

I experienced tingling, numbness and hot-and-cold sensations in my hands, together with pain and muscle spasms in my lower arms and wrists.
[…] Rather than finding the ‘disembodied’ freedom-producing, cyborg-like identity in computing as envisioned by some futurists, word-processing had made my own body all too tangible and limiting.

Guelke also mentions that “96.8% of a sample of students interviewed at San Francisco State University reported some physical discomfort associated with computer use” (392).

In fact, almost twenty years ago, the Washington Post was already commenting on the physical problems exacted on students’ hands:

Pax-Shipley, who graduates this month, has had to face the possibility that she may never completely regain the use of her hands. Accepting that fact, she said, “was hard at first. It was a long grieving process.”

Guelke offers a useful disability studies analysis of the whole topic, as well as a number of important political questions. Why, she asks, are we not demanding that computer manufacturers produce gadgets that are friendlier to our bodies? Why do we not have ergonomics clauses in our contracts or as objects of collective bargaining? How do gender and occupational hierarchy enter the picture? Needless to say, there are politics whenever there is risk of workplace injury, as there should be.

But I think my point is more rudimentary. Academics’ hands are fragile. They are a zone of vulnerability. We shouldn’t read them simply by their external signs (whether the nails are polished, whether we see calluses). Rather, we should become attuned to the hidden injuries of digital labor that can get sent out through their very nerves. We should see the hands not as a sign of privilege but as an object of restraint, the part of our body shackling us to the machinery of our work. Far from being signs of our agency and capacity to act in the world, as they are conventionally construed, academic hands on the keyboard strike me as one of the major instruments coupling us to our institutions.