As you get farther from your fieldsite, things change and fade and blur and accrue artificial color in your memory, like food coloring. 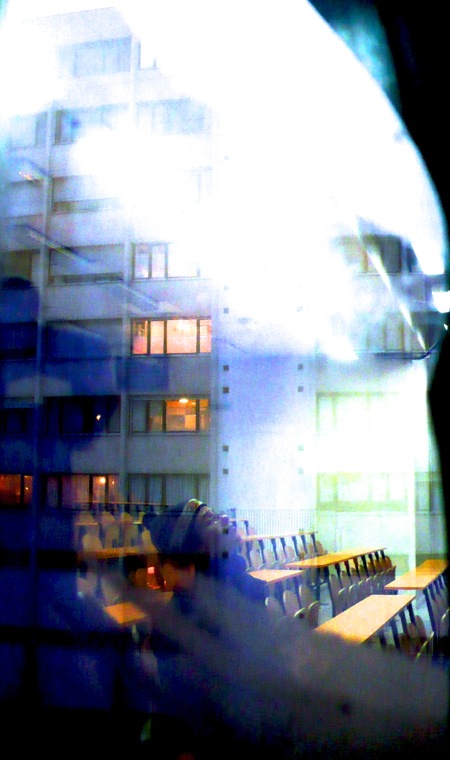 I have a memory of having been in Creteil before, a couple of years ago, and of seeing these reflections of a face, of the chairs in an auditorium, in the blurred window of a decrepit building. 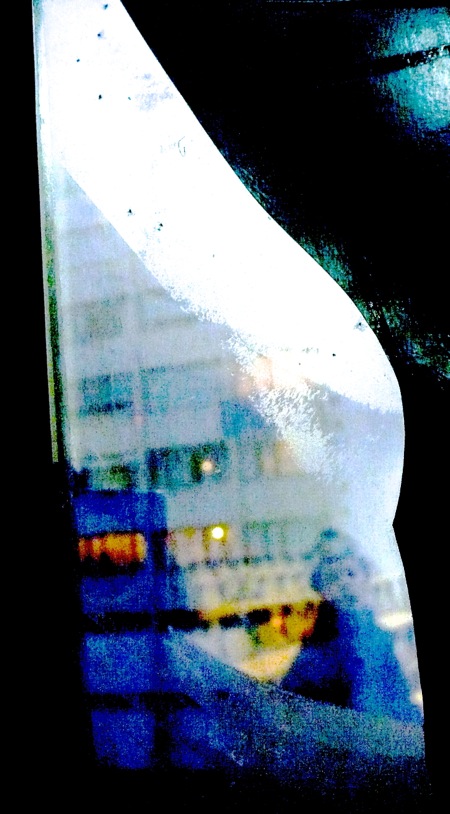 You want to remember these scenes with the colors and shadows, the scarlets and greens and blues, the eye contact that they should have had, rather than the grays, the dirts, the unevenness, the dust that they probably did have.

But maybe it’s a mistake to believe that what you thought your camera recorded there at the time is necessarily more real or more accurate than your later retouching of the same scene.

Posted on December 18, 2012 Posted in absurdity

When academics decide to set their sights towards studying academic culture, there is an amusing trend in their choice of research objects. Call it disciplinary exophilia, the desire for the other. For who do academics study when they study academics? Themselves? Why, no. Au contraire. The anthropologists study the scientists (Joe Masco), and the historians study the anthropologists (George Stocking). Sometimes the scientists study history (Peter Galison), but more often they study postmodern philosophy with great care and concern (Alan Sokal), while the post-modern philosophers are, of course, studying science with equal vigor (Foucault). Education researchers, not themselves known for being particularly enterprising, study academic entrepreneurs (Slaughter and Leslie). The conservatives, naturally, scrutinize left-wing radicals (David Horowitz) while left-wing radicals study the ostensibly moderate and relabel them neoliberals (David Harvey). Sociologists study how humanists rate and rank each other (Michèle Lamont), while literary scholars write reports on how physicists are lazy readers of their colleagues’ papers (Charles Bazerman). A few brave souls study the presidents and boards of trustees (Thorstein Veblen may have lost his job over it), while the presidents generally don’t do research of their own, but they do request studies on how to cut costs by 3-9% in the next fiscal year. Opposite disciplines attract, sharpened knives held out in front as they charge towards each other.

What is this disciplinary exophilia, this tendency to choose to critically examine someone else’s discipline rather than one’s own, a tendency, reduced to its structural basis, to examine the other rather than the self, in short an unjustifiable bias towards alterity in one’s scholarly objectifications? Now of course it is the case that occasionally disciplines do self-scrutinize. But what happens then? The same thing, of course, just exactly the same kind of alterity bias, repeated on a smaller scale: the temptation is irresistible to scrutinize one’s colleagues, one’s theoretical competitors, one’s students, one’s elders, in short, those bad others that ruin one’s discipline. (I leave the provision of examples of this sort as an exercise to the academic reader.) Once in a while, true enough, individual academics do manage to self-scrutinize; however they seldom scrutinize their present; instead they are more often concerned to analyze their past self, which is, after all, almost like examining someone else.

So why not reverse this hideous bias away from self-scrutiny? Let’s start right here, right now, right in this very blog post. In fact, let’s start by scrutinizing this very sentence. Wait. This sentence? No, that one back there, three sentences back. Didn’t it enact a hidden politics of self-satisfaction and indulgence? Wasn’t it a bit lumpy, ill-formed, a bit past the parameters of good style? Rotten, really. Rotten. Not remotely up to the high standards of reflexivity established by David Moser’s aptly-titled “This Is the Title of This Story, Which Is Also Found Several Times in the Story Itself” (a story which, parenthetically, I strongly suggest you, the reader, immediately read).

Dominic Boyer, my college advisor, once made a valiant attempt at self-scrutiny but it also ended in immediate failure (which was, alas, precisely his point). I quote: END_OF_DOCUMENT_TOKEN_TO_BE_REPLACED

I’m quite amazed by this excerpt from a letter of Richard Rorty’s, to one Milton Fisk, on March 20, 1971:

No, it’s the best bet available for improving society. This standard bourgeois liberal view of mine has the same cynicism of all bourgeois liberal views—it says to the people on whose necks one trods that it will be better for their children’s children if they keep on getting trodden upon while we educate the more intelligent of their children to understand how society works. But I believe it anyway. I honestly think that we—the parasitic priestly class which confers sacraments like BAs and PhDs—are the best agency for social change on the scene. I don’t trust the aroused workers and peasants to do themselves or anybody any good. To put it still more generally, I think that nothing but a revolution in this country is going to make it possible for millions of people to lead a decent life, but I still don’t want a revolution in this country—simply because I’m afraid of finding something worse when the revolution is over. So insofar as I have any thoughts on the higher learning in America they are to the effect that we pinko profs should continue swinging each successive generation a little further to the left; doing it this way requires the continuation of the same claptrap about contemplation we’ve always handed out, because without this mystique the society won’t let us get away with corrupting the youth anymore.

So basically, Rorty could not, or could no longer believe in the claptrap of the beauty of liberal arts education as teaching “contemplation”, but was happy to continue its rhetoric in the service of gradualist progressive politics (“swinging each successive generation a little further to the left”). His reason for being against a “revolution” was fairly understandable, if not very noble: as a good “liberal bourgeois,” he was afraid of being worse off afterwards. Or, he suggests, of having someone else be worse off afterwards. His claims to altruism are somehow not very convincing, and one gets the sense that Rorty was animated by a curious contradiction between his own class interests and his anti-Communist leftist ideals. (Gross goes on about his parents’ politics at great length; it’s one of the best parts of that book.)

END_OF_DOCUMENT_TOKEN_TO_BE_REPLACED

I’ve decided to start typing up some of the scenes of everyday life at Paris 8 that made it into my fieldnotes. Here’s one encounter.

It’s the 1st of December, 2009. I’m having coffee with a young man who is my classmate in a class on The Symptom (le symptôme). I think his name is K., but am not sure. He has dark, long hair, a prematurely tired face, a short body, a set of metal crutches and a handicapped leg that dangles.

He is in trouble, he says. He says he doesn’t get what is going on in any of his seven classes. He isn’t sure what he is going to do when midterms come [les partiels].

We talk about the relationship between the department’s pedagogy and its politics. It’s unclear what the relationship is, we agree. But, he adds, one little link [un petit lien] comes in the form of the relations between professors and students. Our teacher in the symptom, for instance, is a lot closer to her students than a traditional teacher would be. But nevertheless: he doesn’t know her name. He doesn’t know any of his professors’ names, he says. He’s only there for the ideas, he says.

K. would leave Paris 8 after that school year, going back to Toulouse where he was from. He had been living in Paris in a cheap apartment, but had never been happy there, hadn’t made a lot of friends, he would tell me, resignedly.

K. was himself a symptom. Of something. His alienation, we might too readily suggest, was the social and subjective product of low status, youth, lack of Parisian social networks, and non-membership in the philosophical nobility, with its characteristic forms of language. He really believed in the intrinsic value of philosophical ideas that Paris-8 offered, but by his own account, couldn’t make sense of them.