Around this time last year, I happened to pass through the city of Cape Girardeau, Missouri. It’s a medium-sized city of 38,000 people, set beside the Mississippi River. When I showed up on my bike in the haze of summer, it felt quiet and empty, and I imagined that it was a sort of rust belt merchant town, a victim of the obsolescence of Mississippi River traffic, like Cairo. The economic story is a bit more complicated than that, it turns out. According to the city’s 2007 Comprehensive Plan (sec. 2), the town has had several periods of growth, initially in the 19th century because of river traffic, then around the turn of the century with a shift from steamboats to railroads, and again after World War II with a shift towards interstate highway traffic. This shift towards the highway, and I suppose the general post-war rise of car culture, brought about a familiar story of urban transformation: the surrounding farmlands partly became into suburban developments, while the historic downtown was increasingly abandoned:

As the more suburban areas continued to expand, the downtown began to decline as larger retail development spread to the outskirts of the City. By the 1980s larger retail stores and a regional mall were constructed near Interstate 55, further negatively impacting the market viability and tenancy of the downtown core area. The continued decline in downtown commerce has led to the significant ongoing efforts to preserve the City’s history and certain landmarks that add to the colorful past of Cape Girardeau. [2-5]

Seen in long-term historical perspective, the city appears to be a classic — even stereotypical — illustration of how shifts in the dominant mode of transportation determine the patterns of economic and urban development: the city reoriented from river to rail, and later from rail to highway. Seen from closer up, we find out that the city has, nevertheless, tried to preserve its “history” and “colorful past,” whose value is, of course, simultaneously cultural and economic.

On one hand, its “history” offers a cultural identity to a city that otherwise might have no choice but to surrender to reigning forms of social and economic homogeneity in America: to have a “colorful past” is to claim to be different — or at least, to have been different once — from every other city of the same size and approximate shape. On the other hand, of course, having a history is an economic strategy: it helps to bring tourists, giving them something to look at, and something to purchase in the city’s antique shops, which line the semi-revitalized downtown. 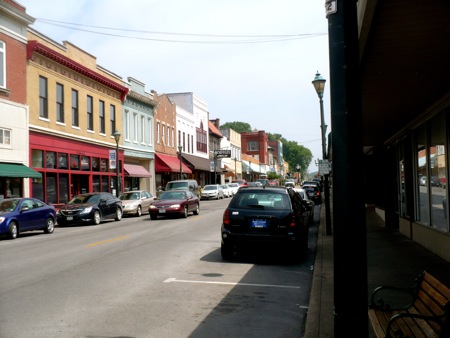 If you believe the population statistics on Wikipedia, it is a city that has never been larger than it is now, but one which has essentially ceased to grow. And in such a place, again for simultaneously economic and cultural reasons, it matters that this is a college town: the home of Southeast Missouri State University. 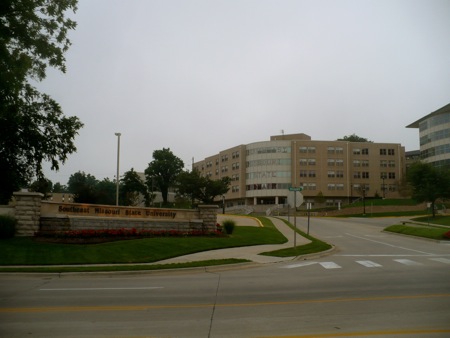 It was a gray day when I went past the main entrance to campus. The buildings looked modern, generic, designed for access mainly by automobile, the campus name adorned with flowers. 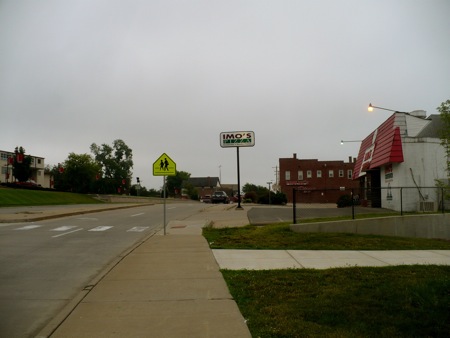 Across the street, things looked pretty empty. Those are two pizza restaurants off to the right. 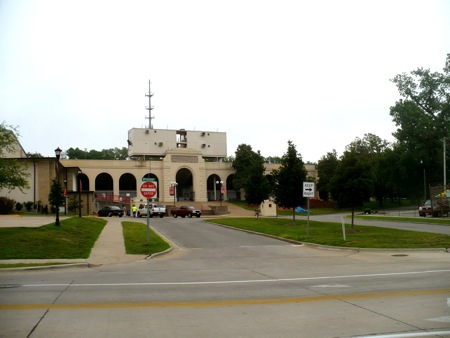 There was, of course, a campus stadium. 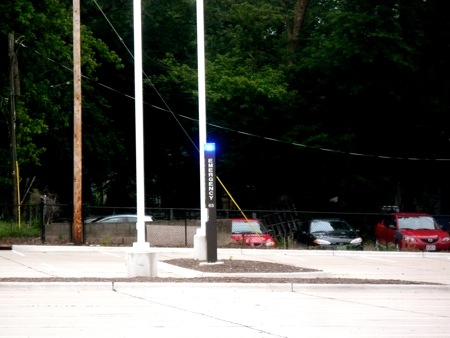 I wouldn’t have guessed that the (largely homogeneously white) neighborhood had tremendously high crime rates. As it turns out, according to the campus police, in 2010, there were 0 murders, 0 manslaughters, 0 robberies, 0 assaults, and 0 arsons on campus. On the other hand, in the same year, there were 9 burglaries, 2 car thefts, and 2 sexual assaults. Not to mention 9 arrests for liquor law violations and 6 for drugs. So apparently they do need an emergency telephone. Plus, in America, it’s part of the cultural and institutional norms for a college campus these days: what good is a campus with a stadium and pizza restaurants, if you can’t also rapidly summon law enforcement? 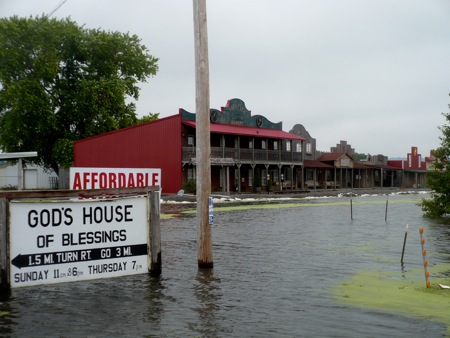 However, closer investigation shows the existence of some problems that law enforcement can’t prevent. Such as the flooding of the Mississippi River and the corresponding inundation of nearby neighborhoods. (This scene was just across the bridge to Illinois; the town levee tries to prevent such situations.) 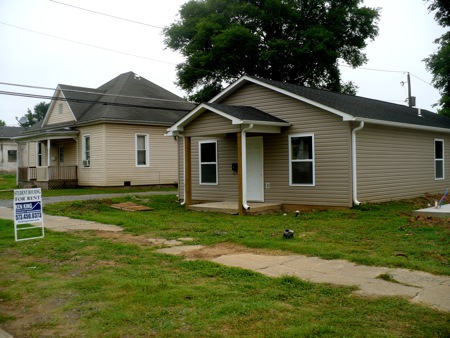 The campus law enforcement also seems unable to prevent the growth of empty lots and bleak student housing with tattered lawns. This is not an exceptionally wealthy town: in 2000, the median household income was $32,452, about 14% less than the Missouri state average, and 15.2% of the population was below the poverty line. According to the college, a majority of students don’t graduate. In terms of family incomes, 26.9% of students report family incomes below $30,000, while 28% report incomes above $75,000. Class may play a role in who gets to go to college here. 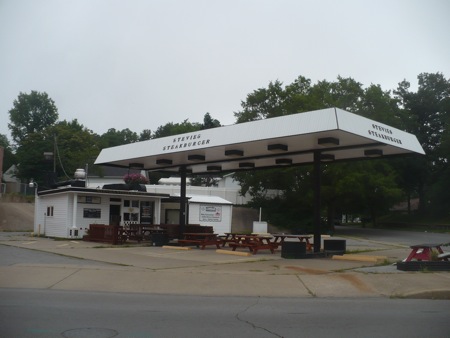 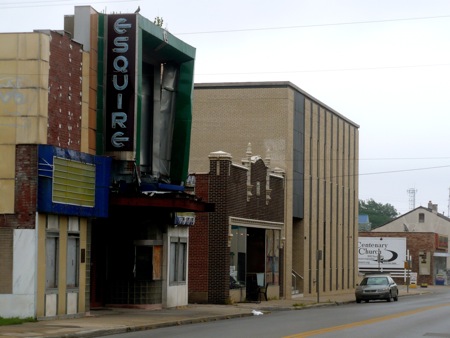 And that building in the middle there is, as far as I could tell, the sole local coffeeshop. It was quite modern inside. 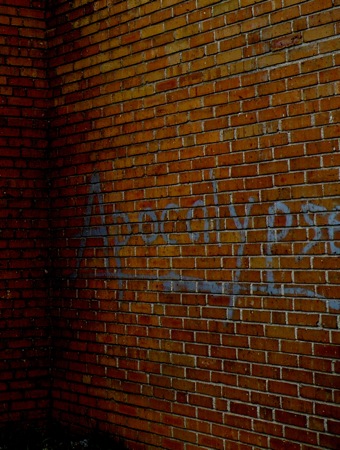 “Apocalypse Now,” said the silver graffiti on a wall nearby. 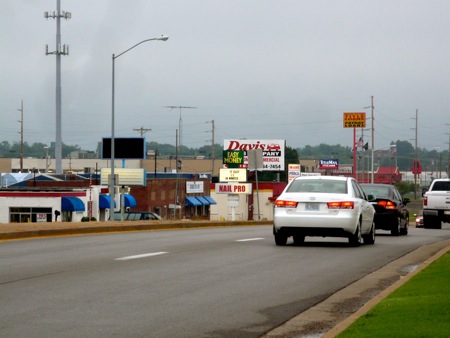 Out in near the highway, the cars rolled by.

I was pretty fascinated by this town, I have to say. I won’t pretend my acquaintance is anything more than superficial. But I was surprised, especially, by the tiny coffeeshop culture: it was populated by a set of local intellectuals who wanted to import coffee habits from California, talk about medieval theology and haeccities, recount life as a soldier in the Iraq War (in one case), compare the local music scene to nearby Carbondale in Illinois, look down on “hicks” in the country, and dream about becoming writers. Intellectual life doesn’t always depend on institutional status and urban location.

At the same time, the college has a purely economic function that no doubt far outweighs its role in fostering tiny intellectual subcultures. According to the city’s Comprehensive Plan, the university is among the four largest employers in town, and is seen as an ongoing source of new jobs, a tool of neighborhood revitalization, an organ of general economic development. Apparently it has a “pivotal location situated between the downtown district and [a] proposed redevelopment area at William Street and Kingshighway intersection” (8-81), and, elsewhere in town, was planning a “research park.” It is, however, unclear whether this research park was ever built, as far as I can tell from the college website.

One wonders how and whether the narrative of an “evolving college town” fits together with the narrative of a “historical Mississippi River port.” Both narratives are, I suppose, economically effective, serving to orient official images of the city and to facilitate the sale of goods, services and experiences to locals and visitors. But they seem to conjure up very different senses of history. Very different architectures, even, if you look at the campus buildings and then back at the renovated downtown. What role does a college play in a nostalgic tale about an earlier era when almost no one went to college?