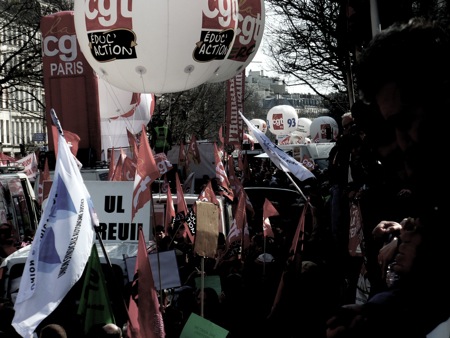 Une manifestation is the French term for a protest march in the street. It’s a pretty standard local political ritual, mocked and memorialized by local jokes and international stereotypes alike. “Don’t bother going today if you don’t feel like it,” an  American grad student tells me one day when I feel lazy, “there will always be another one.” 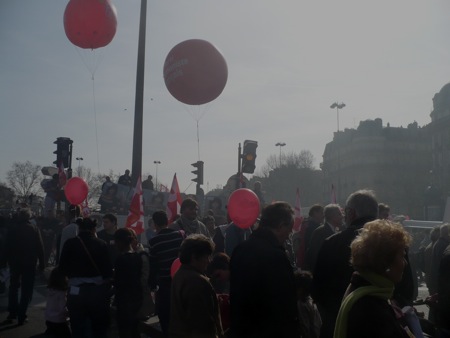 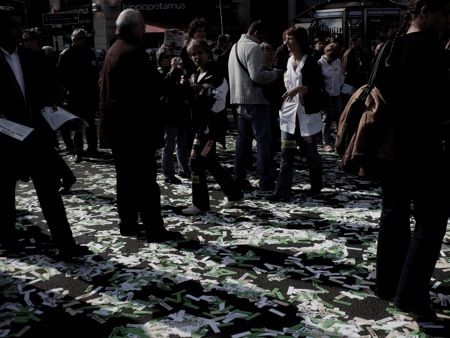 The “manif,” as it’s called, strikes me as a paradoxical social form: imagined as a massively, even paradigmatically collective event, its collectivity nonetheless has a somewhat fictive quality. Most marchers stick to little groups of their friends, paying attention mainly to the people immediately around them. Phenomenologically, a manif is fractured and disorganized, with people leaving and showing up, wandering back and forth, stopping perhaps to take a leaflet or a snapshot. For a marcher, the crowd is a visual jumble of strangers’ bodies crisscrossing. As if to make sense of the constant random motion, a curiously quantitative consciousness descends at times even on the defenders of the most radical causes. The march’s success gets perceived as proportional to the apparent size of the crowd; it can become almost actuarial. People take note of who shows up and of who didn’t make it. 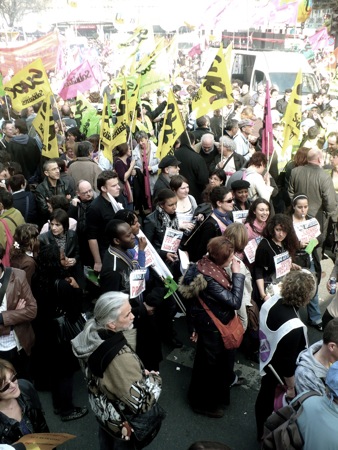 It would be hasty, no doubt, to conclude that the lack of verbal communication between most members of the march indicates indifference. The manif is an event whose significance derives less from the usual forms of personal interaction than from the sheer effervescence of mass bodily proximity. From the heat of the crowd. From the noise of the crowd. From shouted slogans, even the inaudible ones, and from the shouts of colors of hundreds of signs, and from the hiss of mass motion. From the fact that, for a change, strangers on the street are assumed to share a common purpose. 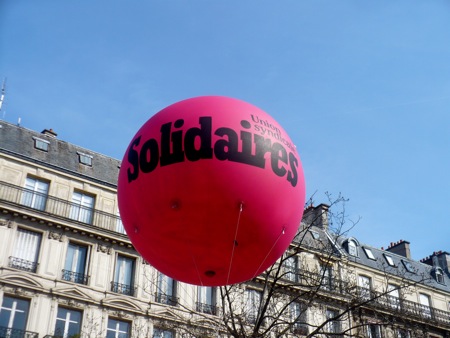 A manif has a point of departure (often a big Parisian square), a destination (maybe a government ministry), and a route connecting them. It becomes a performance of political linearity, its physical progress iconic of the political progress tacitly demanded by the marchers’ signs and banners. By cultural convention, the crowd becomes iconic of a social group (the homeless, the miners, the students…) and the march itself becomes symbolic of a populist political process where the governing powers are expected to bend to the people’s will, a will manifested in the collective body. 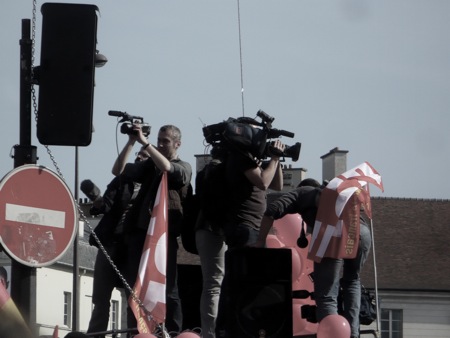 But not everything about a manif fits into this neat political schema. The manif’s collectivity is partly a product of the mass media: dozens of dozens of photographers record not so much the lived experience of the marchers, which is often mundane and incoherent, but the dramatic banners and spectacular images of the crowd as a whole, often taken from rooftops or cartops (left). The whole collectivity is almost never visible to the marchers themselves at the time; at best they see it afterwards in the papers. But even as collectivity is technically mediated, individuality is effaced: most people carry premade signs and placards with standardized messages (“The university is not a business!”), as if disinclined to think up their own slogans and happy to blend into the crowd. Sidewalk spectators, for their part, tend not to talk to the marchers, usually content to watch the march pass like a spectacle. One person’s corporeal effervescence is someone else’s commodity image. 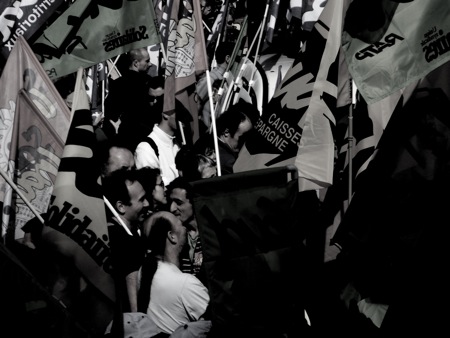 And even leaving aside these internal paradoxes, the manif is a political ritual that often fails to produce results. In spite of dozens of street marches over a four month period, the Spring 2009 university movement failed to persuade Sarkozy to withdraw his reforms. Today in France, university activists are looking for new tactics.