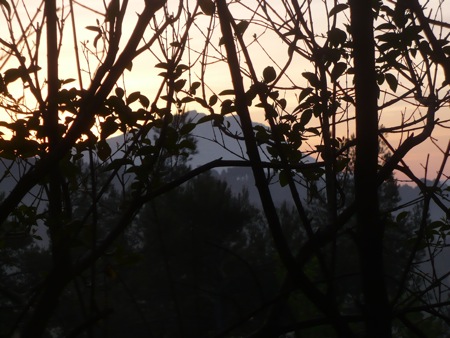 There have been a bunch of articles on the borders of campus spaces. One thing they all have in common is an insistence that universities in some way manage their boundaries, and usually the surrounding neighborhoods too. People have chronicled how universities put up fences to keep out the poor, how they tinker in urban redevelopment, how they build science parks and sometimes fail, how they create low-income college slums and low-budget small businesses like copy shops, and so on.

But when I was visiting Aix-en-Provence last month — its iconic mountain is shown above — I was struck by the sense that the university just didn’t have a neighborhood. Sure, there were a couple of little sandwich shops and a café where the faculty ate lunch. There was a complex of dormitories on a hilltop and a nearby park where it looked like a lot of students were enjoying the sunshine. There were streets where you could see students and even a few teachers hurrying towards class. Nonetheless, in some directions you only had to walk a dozen yards from the campus gate before the university was entirely forgotten in the quiet streets.

Here, then, as a supplement to the scholarly research that has demonstrated the existence of campus boundary zones, I want to write about a few photos I took that illustrate the relative nonexistence of the campus neighborhood. 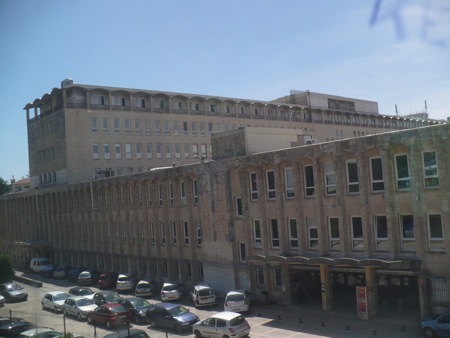 The university was bordered by the railroad tracks. This is what the main Faculty of Letters building looks like, seen from the train. Its façade was crumbling; here you can just make out the nets over the entrance to catch falling rubble. 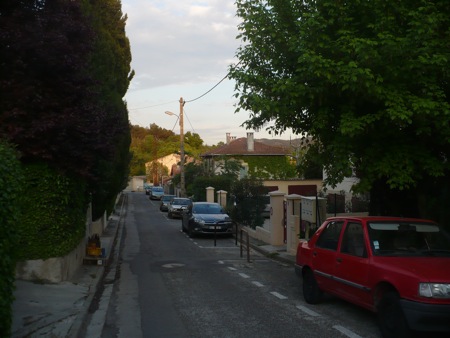 But if you got off the train and walk down the little side street by the campus, there’s no sign of anything academic. No pedestrians, even, when I took this around evening. A few parked cars. Emptiness. 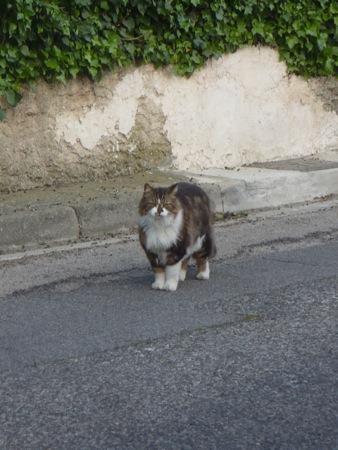 The only visible resident of the neighborhood seemed to be this cat, which fled moments after I took its picture.

By the way, if you want to see where this is, I’ve given an approximate map of my walk on google maps. 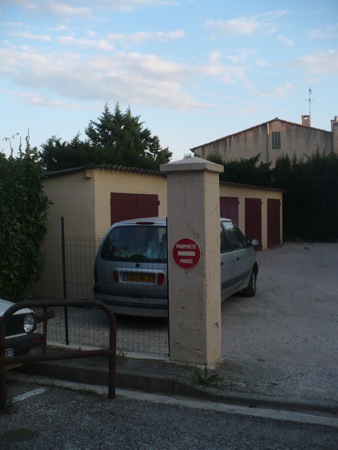 The most common form of public communication was a “Private Property” sign. That, it seems to me, is decidedly characteristic of this rather wealthy town. 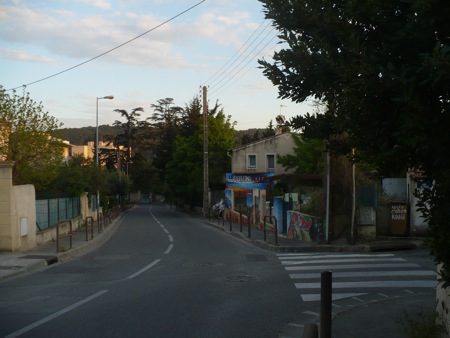 The little café with its colorful mural was closed by evening. 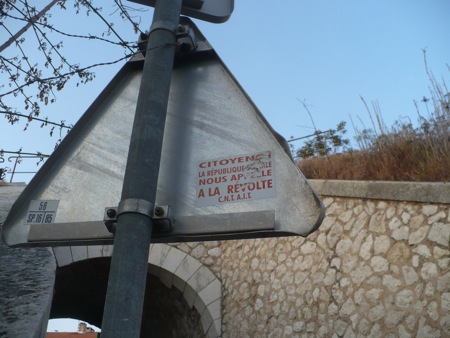 As I approached the tunnel under the railway, a little sticker on the back of a road sign, half scratched off, transmitted a plaintive cry: “Citizens, The Social Republic Calls us to Revolt.” It was signed by the CNT-AIT, which apparently is an anarcho-syndicalist union. I doubt that Aix would be the most receptive town for this sort of message. 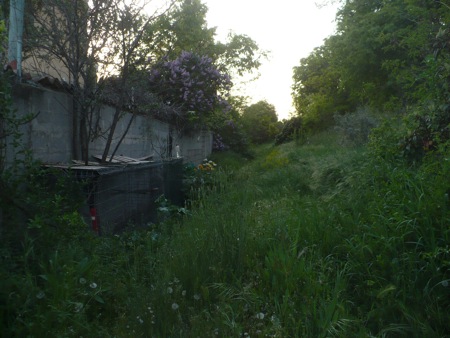 If you look back towards the university campus along the railway (which was up on the embankment at right), all you’ll see is cascades of spring flowers and long grass. No one was present; and the omnipresent walls (at left) served to separate private space from this strip of semi-public, unclaimed territory. 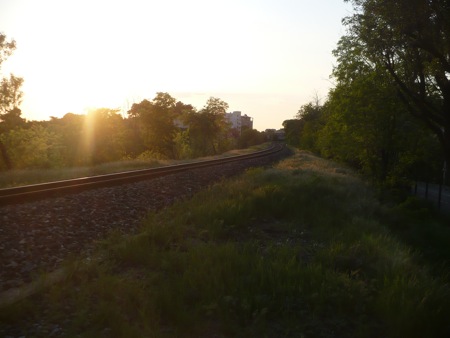 I crossed under the railway and climbed up its embankment. The university may be that tiny hint of a building mostly hidden by the trees; note how quickly it disappears into the semi-urban landscape. One is hard-pressed to call Aix a city, but “town” seems the wrong word for a place of 143,000 inhabitants. 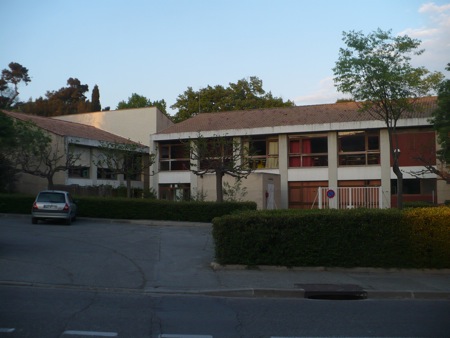 A bit farther along, I came to a nursery school. In the mornings I often saw parents picking up their children there. 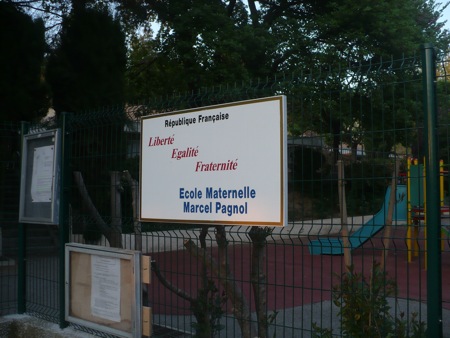 The official sign reads: French Republic. Liberty, Equality, Fraternity. Marcel Pagnol Nursery School. I note that the security arrangements are less severe and the fences lower than on the university campus. 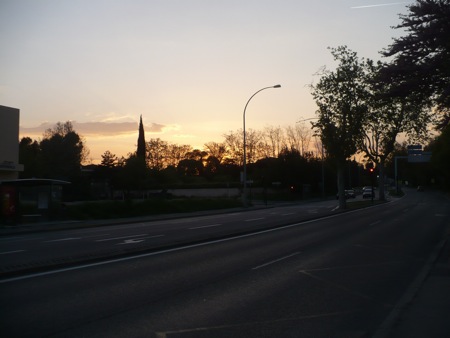 As I neared the campsite where I was staying, the scene looked very much like highways everywhere at sunset. The streetlights waiting to spring to life. A few cars passing. The sheen of the asphalt.

No sign that it’s a college town. Perhaps the category of “college towns” is somewhat overrated, or at any rate tends to conceal the fact that academic spaces never manage to totally control or colonize their surroundings. The idea of a “college town” is scarcely applicable in France, at any rate; Aix is about as much of a college town as you can get, and even then, it’s nothing like, say, Ithaca, New York.

If we climb up into the university building and look out, we can examine the inverse perspective: the town seen from the university. 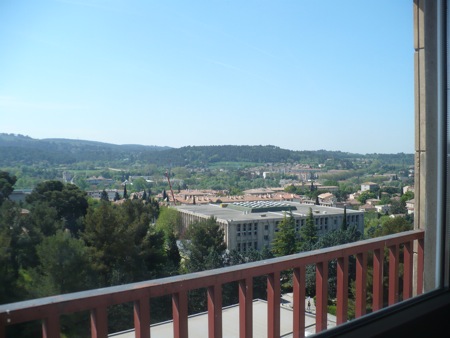 This (taken a different day) was the view from the philosophy department. That’s the campus library in the midground. This balcony in the foreground is officially off limits, though I saw undergrads climbing out through the windows to play on it.

What’s the point of all this, you ask? I’m not sure myself, yet, but it seems to me important to emphasize that no matter how much universities may fantasize about their own importance, they still rapidly disappear into their surroundings.

A note for the bibliographically inclined. As regards the boundaries of campus spaces, the prior work I know of includes the following: Kate Eichhorn’s Breach of Copy/rights: The university copy district as abject zone (see also my old post), James Siegel’s Academic Work: The View from Cornell, Gökçe Günel’s The Gated Campus, Its Borderless Subjects, and the Neighborhood Nearby, Gordon Lafer’s Land and labor in the post-industrial university town: remaking social geography, Juliette Guilbert’s Something That Loves a Wall: The Yale University Campus, 1850-1920, and Blake Gumprecht’s The American College Town.

One thought on “Nonexistent academic neighborhoods”