After nights of fieldwork, ethnographers have to make their way home. For me, after I get off the metro, the walk looks like this: 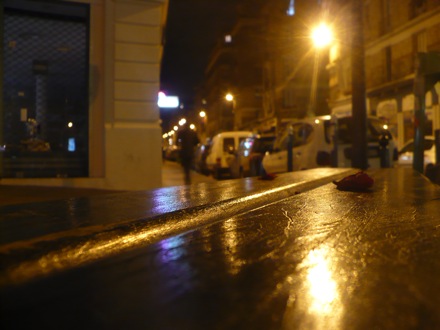 Except that the first time I try to take this picture, the camera focuses on the lines in the the bench where I propped my camera. When we correct for this oversight, we see the long view along the street, creeping up to the horizon and out of sight. 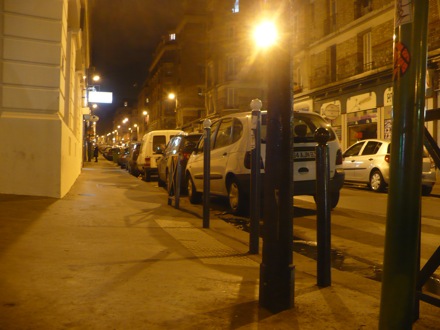 This walk home, which extends just past the horizon of this photograph, always seems like a terribly long distance, even though it only takes a few minutes. Someone suggested that my apartment is about as far from a metro stop as you can get within the city limits, even though it’s probably only 600m.

If we turn around, we get a glimpse of the intersection and the other avenues disappearing and the hint in the streetlights of spring leaves on the trees on the left-hand street. You wouldn’t have seen that four weeks ago. 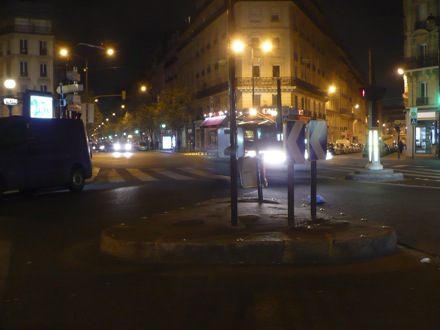 Until recently I wouldn’t have been inclined to count this scene as “part of my fieldsite,” which is normally fairly institutionally limited by the boundaries of the university. But I’ve started to notice people I recognize from the campus getting on and off the metro here. Last night as I got off the metro, I saw a group of people whose faces I recognized from the campus squat I’d just visited. I hadn’t spoken to them before, but as we passed on the platform they looked at me carefully, and I realized I vaguely recognized them and tried to emerge for a second from my usual not-looking-at-every-passing-person-on-the-metro face, and then we had walked by each other towards opposite exits.

There’s a bit of an ethnographic point here. At first my neighborhood (near metro Guy Moquet, if anyone cares) just seemed to me a random place where I’d happened to find an apartment. But as time passes I’m discovering that it’s not as disconnected from campus as I thought, since it’s also the residence of Paris-8 students and faculty. Not that I feel remotely integrated into off-campus social life. But it’s good to at least recognize little pieces of its existence in the anonymity of the urban crowds.