Dozens of copies of this poster have been put up at the University of Paris-8. 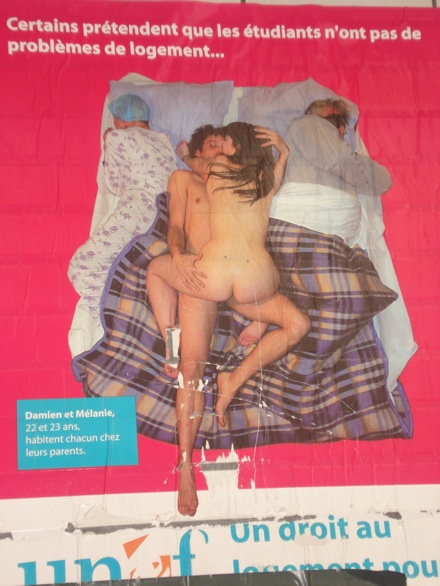 (Photo by Imen I., a student in sociological methods at Paris-8.)

The title at the top reads “Some people are pretending that students don’t have housing problems.” The caption in blue on the photo says that “Damien and Mélanie, 22 and 23 years old, each still live with their parents.” You can’t really read the bottom, but it informs you that UNEF, the biggest student union in France, demands students’ right to housing. (Relevant background information: there’s a major shortage of dedicated student housing in the Paris area.)

This poster has, as far as I’ve seen so far, tended to shock and irritate campus-dwellers more than it attracts support for its ostensible cause. It depicts a young couple having sex in a parental bed while the parents are sleeping. The couple is similar, they both look pale-skinned, they both have dark hair, they’re both equally nude. The sex is hetero although, since the girl is on top, it is slightly less normative than it might be. I don’t really have a good point of cultural reference here, but for lack of anything better, French wikipedia claims that “La plus courante est la position du missionnaire.” Anyway, the boy’s body is stretched out on the bed and he’s gripping his partner’s head and thigh with his hands; the girl seems to be holding herself up with her left arm. It looks like they’re kissing, and the boy’s eyes are shut. I hope he hasn’t fallen asleep.

The parents are sleeping. Or are they? The old man’s sleep mask hints that it takes an effort to stay unconscious. The parents are turned away from the middle of the bed as if trying not to pay attention, trying not to know; if this were a real scene, they would at best be pretending to be asleep. They’re wearing nightclothes that blend into the bedding, as if symbolically they were only the unwanted backdrop to the sexual act in progress, to the young couple’s bodies that, compared to the rest of the bed, are so much more visible and so much more saturated with color. The bodies of the young couple seem to be physically right up against the bodies of the old couple, the girl’s right side fitted into the curve of the old man’s curled-up body, the boy’s shoulder possibly propped up on the old woman’s back. But at the same time, the bedding (that garish quilt) seems to act as a physical and, by implication, a symbolic barrier between the young and the old couple. It seems to maintain a minimum of physical separation even as the whole scene emphasizes the reckless and scandalous closeness of the children’s sex act to the parental bed. Taboos are being broken in this image, but only within limits.

The image is organized in such a way as to manifest a series of oppositions between the two couples:

The bodies of the young couple serve here to divide the old couple from each other. Here the young mediate and interrupt the old: symbolically, this looks something like an allegory of the way that children’s sexual relations interfere with their elders’ relationships, of the way that inter-family sexual relations interrupt intra-family (kin) ties. One of these young people is presumably the child of the sleeping parents; but here this person, whichever it is, is represented not as the child but as a member of a new couple opposed and probably annoying to their elders.

At the same time, it has to be said that both couples are obviously very similar in some ways. They both look white. They both look straight. And although only the young couple is having sex in this picture, we can infer that the old couple was, at a previous time, also having sex, since we can assume that that would have been the social and biological origin of one member of the young couple. In that light, the old couple should perhaps be viewed as “post-sexual” more than “asexual,” as the sleepy remainder of past scenes of sexual passion. It comes to mind that the only thing really taboo about this scene as a social situation is that the young couple is in the same bed as the parents. Aside from that, it’s a textbook image of hetero sociosexual reproduction. One couple produces a child who forms a new couple which in turn strives to produce a new child… That’s about as normative as it gets, on my understanding of French social order.

Now, although it seems to me that everything I’ve just said about the image is basically obvious, is basically something that one can read in the image without a great deal of interpretive risk, it must be said that, to the best of my knowledge, none of these considerations figure in local interpretation of the poster where this image appears. No one I’ve met sees this as a picture that deeply invokes norms and scripts of social reproduction; my sense is that local interpretations start and end with a scandalized sense that it’s a picture of a couple having sex. The depiction of sex — at least in the fairly unrelated context of a student housing campaign — is viewed as a scandal in itself, end of thought. Or perhaps just as a tasteless bit of political advertising. Someone told me: maybe this would make sense for a condom ad, but here!?…

The implicit logic of the poster, of course, is something like: “for lack of adequate student housing, students have to live at home; thus they have nowhere to have sex but their parents’ bed; which is absurd and scandalous; hence the current housing shortage leads to scandal and demands action.” It’s a logic of political shock, quite likely designed to catch the eye and stick in memory more than to elicit any direct political action. And insofar as it has indeed caught the eyes of the campus (a long row of these posters is put up in a series by the solitary university entrance), it seems to be, paradoxically enough, a success. The scandal represented in the image becomes the scandal of the image itself.

One thought on “An ideological enigma: sex sells housing?”