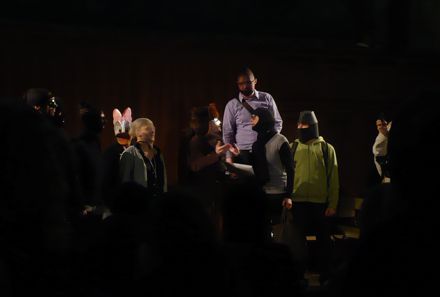 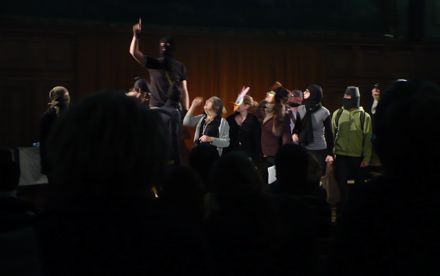 The more serious debate went on with a panel discussion. 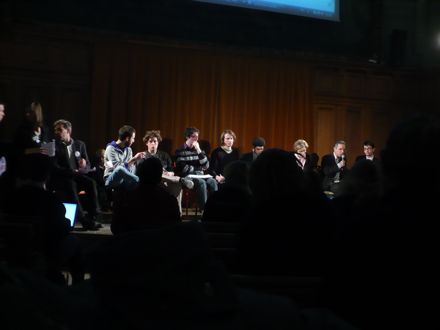 However, among the panelists was the university president. And every time he opened his mouth to speak, people in the audience booed and hissed. He waited for them to finish; the moderator made failed pleas for civility; he spoke some more; his face became agitated. 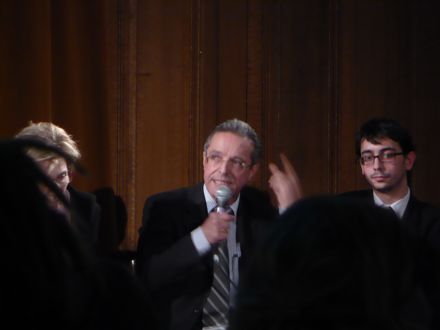 In essence, his speech was a failure, blocked by the crowd. “By anarchists,” someone claimed later. He didn’t stay to the end of the debate, leaving by the side door soon after his (interrupted) speech had come to an end. 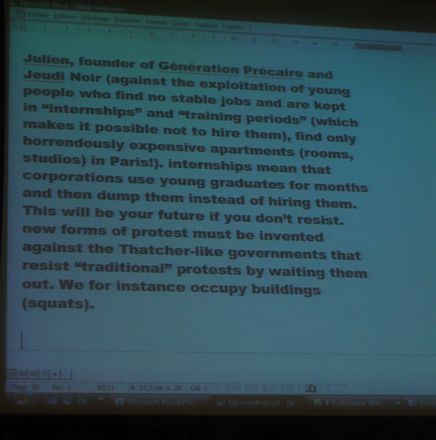 One of the other people talking was a representative of a squatter campaign. He explained to us that squatting had the advantages of being exciting and rent-free, but that, of course, there were “strong chances of legal trouble”… at any rate, I was interested in his negative comments on traditional protest forms. “Internships mean that corporations use young graduates for months and then dump them instead of hiring them. This will be your future if you don’t resist. New forms of protest must be invented against the Thatcher-like governments that resist “traditional” protests by waiting them out.”

And this has indeed been one of the common remarks about last spring’s university protests: that traditional protest forms (i.e., street marches) seem ineffective against a government that can simply ignore them. 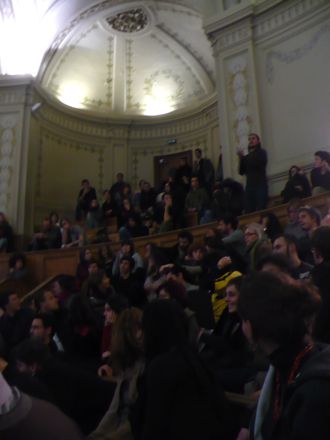 Now looking back up into the auditorium, we can see one of the protestors standing up. He was shouting about the undemocratic format of the event and about how the voice of the audience had been excluded. The original format dictated that panelists spoke first, followed by “invited” audience comments, and finally general comments. That fell apart when the “general” audience wanted to speak sooner: after the speech you see pictured here, the event never returned to the sedate form of a well-groomed public event. Rather it hissed permanently with the noise of loud conversations among the audience, it hissed with interruption, it hissed with anger and incoherence.

Incidentally, it doesn’t look like such a large crowd in this photo, but there may have been a couple of hundred people there all told. 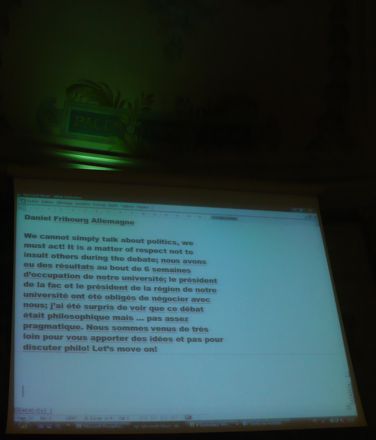 A number of foreign activists were present. At the end, an Austrian fellow took the stage to give a sweeping critique of the chaos of the event and to express a general sense of disappointment. He was speaking English, so the translation was into French. I’ll translate back:

We cannot simply talk about politics, we must act! It is a matter of respect not to insult others during the debate; we’ve gotten results at the end of six weeks of occupation of our university. The presidents of the university and of the region were obliged to negotiate with us. I’ve been surprised to see that this debate has been so philosophically oriented… and not adequately pragmatic. We’ve come a very long distance to bring you ideas and not to talk about philo[sophy]! Let’s move on!

A minute later, someone, perhaps the protestors in the audience, set off firecrackers in the auditorium. Naturally, everyone jumped up out of their seats. (Including me.) We waited anxiously to see what would happen; another little explosion went off, even louder than the first. The crowd became muddled and people started to walk out. The security personnel showed up on the stage and waited outside in force. Someone made a half-hearted proposal to “occupy” the Sorbonne but I don’t think it got anywhere. At any rate, I got out of there and went home, not even stopping like a good ethnographer to survey other participants on their reactions.

3 thoughts on “Is the university burning?”