A couple of weeks ago, there was a big conference on communism at Paris-8. I went to an afternoon session that had Etienne Balibar and Alex Callinicos, curious to hear what kind of intellectual project could be made out of communism in these post-Soviet, often antisocialist, and post-20th-century days. The conference took place in a big, decrepit lecture hall in Bâtiment B. It looked like this: 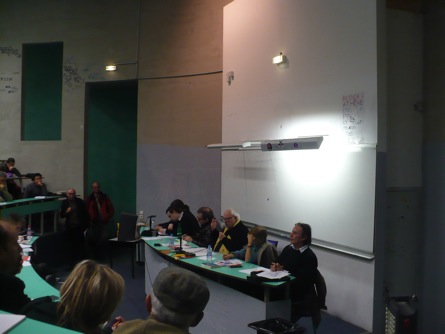 A raised table, poorly lit by a fluorescent lamp shining on the whiteboard and a dim incandescent light aimed high on the wall & accomplishing nothing. Two microphones, passed back and forth between panelists. Debris of paper and waterbottles. Notebooks. Five men, one woman. Semi-formal dress: coats and jackets, Balibar in a vast yellow scarf, collars peeking out from unbuttoned shirts. Some are leaning back, the two to the left seem to be maybe whispering to each other, a couple take notes, the man at right stares out into space hands clasped as if the audience weren’t even there. (We will come back to this point.) 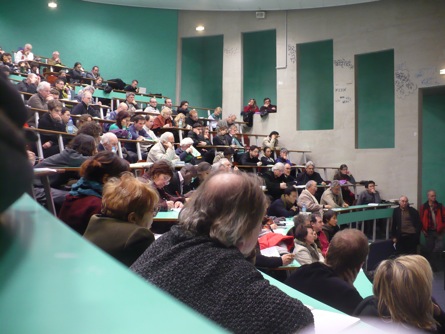 If we turn to look at the audience, we see a lot of middle-aged and old folks, interspersed with a collection of philosophy students and other possibly radical youth. Many of the people I know from the Paris-8 philosophy department showed up — unsurprising, since it was partly a homage to their recently departed trostkyist colleague Daniel Ben-Said. The room was almost full; you can even see, as if in a cartoon, two people draped across the auditorium window and peeking in (at top center). It’s interesting to think about the collective bodily states of an audience. This would be easier if I’d given you a bigger image, but you can see at the same time the orchestration of the collective gaze (largely directed down at the speaker) even as many seem to be facing elsewhere, looking down at their notes, looking off into space. In terms of overall posture we can see something like an orchestrated slackness, a socially authorized moment of physical laze, with a lot of people leaning forward onto their desks, their heads extended towards the podium, the rest of their bodies left behind dangling like irrelevant appendages: in a setting like this, where you’re sitting still for long periods in an auditorium, the torso and arms become nothing but support systems for the eyes and ears, the mouth is irrelevant since you’re not talking, the hands may wiggle slightly as they take notes, the legs are doing nothing but waiting for future motion. Often the arm is propping up the chin, or the cheek, or some other part of the head, as if the burden of thinking weighed things down too much for the head to hold itself up — and though I’m sort of kidding about that, there’s no question that we can see here some excellent examples of socially authorized intellectual audience posture. The melancholy lazy attentiveness of a hand holding up a chin, little imitations of Rodin’s Thinker, would seem a lot less normative at a rugby match, I’m guessing. Note-taking too might seem out of place in a stadium or a rock concert: we notice that seemingly spontaneous intellectual engagement as an audience member is in fact done in accordance with local social norms. Local norms that differentiate the occasion from other occasions. 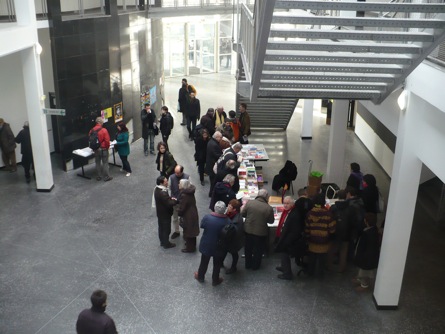 Just before the talk, a crowd milled around outside at the bookseller’s stand. Bookselling seems to be the kind of small commercial activity that goes best with talking about communism. That and selling coffee in the session breaks. I did hear a few interesting ideas in the talks (Balibar‘s especially), but afterwards I tended to agree with some other friends that it was a deeply academic occasion, one with no audience participation and a traditional division between the speaking intellectual luminaries and the silent receptive audience.

This sense of the event seems to have been shared, because afterwards, someone wrote a satirical email to the philosophy department listserve:

“I’ll allow myself to share the story of a silent cry I heard today, one shared by several people

As in a scene of platonic dialogue,
someone encountered someone who wanted to hear everything about the event with Balibar, Rancière, Zizek, and the others who took part in the symposium, and what speeches they gave on the theme of communism.
Unfortunately, he could say nothing precise, except that he had a stomach ache
surely it was digestive problems
after decaffeinated coffee, here we have the decommunized communist colloquium
the public had no right to speak
but all that is for the good of communism, so that “the debates can go as far as possible,” “to deepen the problematics” without being bothered by outsiders and without wasting time… after all it’s a matter of productivity.
Don’t look for Socrates, this story is post-modern, to file under “comedy.”

it helps in the face of tragedy.

I won’t comment much on this intriguing prose poem other than to suggest that it’s revealing of a collective appetite for new intellectual or political forms in the face of a conference that was organized in an obtrusively traditional fashion.

One thought on “Decommunized communist colloquium”