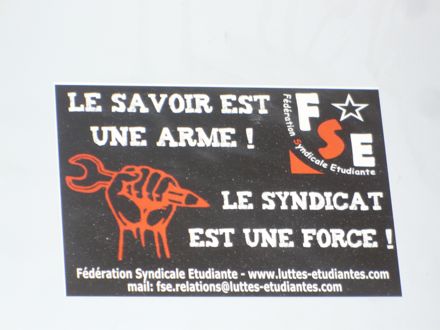 Knowledge is a weapon! … The union is a force!

This is the continuation of my last post about the visual culture at the University of Toulouse (Mirail). Just having seen the 14 Juillet, i.e. Bastille Day, the national holiday in celebration of the 1789 French Revolution, it’s tempting to draw some comparisons with a rather different, far more legitimate kind of political landscape: that of the enormous military parade that took place Tuesday morning on the Champs-Elysées. Yes, I went, curious to see what exactly was involved in this enormous national pageant.

I was planning to be somewhat stunned by what I expected to be the overwhelming spectacle of a parade of tanks and thousands of soldiers through Paris. But my first sight was rather of an overwhelming flux of ordinary people, backed up inside the Metro station. Just to get up the staircase (the escalator was motionless) took five minutes of slithering through crowds, the kind where anonymous bodies smush together and purses and backpacks whack you inadvertently. Once outside, people thinned out marginally, so that there was occasionally room to breathe, but there was still a mass of bystanders twenty rows deep separating me from the parade. I found my friends and we wandered back and forth in the crowd, the shorter one climbing on the back of the taller to get a peek at the action. We caught glimpses of the shiny helmets of the mounted cavalry, adorned with feathers bobbing in horsey rhythms, and we saw the roofs of red trucks carrying the firemen (pompiers), and a number of miscellaneous military trucks, which looked like the army towtruck brigade, with a crane or two painted helmet green. The helmets of the soldiers atop their trucks were motionless, as if they were under orders to stare straight ahead. Their civilian audience, meanwhile, was busy climbing every available object to try to catch a glimpse of them: lampposts, fences, trees, and one guy who stood improbably on top of his bicycle, which leaned against a statue. For us there was never a clear view of the spectacle, only a chaotic view of the audience.

So from my perspective, instead of being a direct visual experience of the French army on the march, the parade seemed more like a discontinuous encounter with the distant sights of their passing signs: the tip of a gun, the plume of a feather, the whir of a patrol of helicopters passing overhead, the spiral of an ornamental paratrooper descending to salute Sarkozy. It struck me, though, that the military’s essentially absent presence was somehow fitting, that the fleeting quality of their appearance is emblematic of the average citizen relationship to the military here (or in Chicago, for that matter). The military is something that appears at the fringes of everyday life, something whose power is more a matter of imagination and media representation than immediate contact. 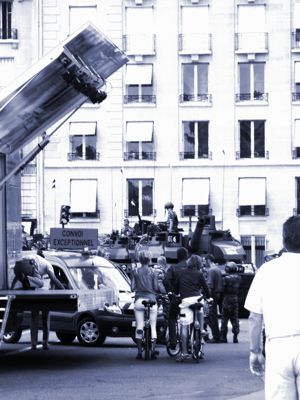 After the parade, people crowded around on the street to examine the dispersing military vehicles. Here, people huddle around a Convoi Exceptionnel involving a tank or two escorted by some police cars. Here there was a bit of close contact with the military, but not at the height of a spectacular parade; just in the incongruous context of a tank driving through the middle of Paris. Which brings us to an interesting fact: if one examines the media representations of the parade, there is no sense of the crowd, no sense of the spectators, no sense of the unframed afterimages of the military dispersing into the city streets. Rather, one finds a series of perfectly framed photographs of state power:

In the newspapers’ photos of this event, we find jet fighters with red, white and blue exhaust traversing the Arc de Triomphe, fairly symmetrically framed, the aircraft looking like a large pitchfork poking the sky from the ground. And soldiers perfectly coiffed in long mechanical files. And sometimes the photos are full of military regalia but almost lack a frame, as if the army effaced the horizon to fill the visible world. There are pictures of political leaders (Sarkozy, Monmohan Singh from India) reviewing the troops with generals at their shoulders, of their wives waiting (always, in this series of photos, it’s the women who are the appendages of the male figures of power, and the soldiers themselves are 100% male), of political celebrities greeting each other.

Our provisional conclusion about the absent presence of the military in the eyes of (what I take to be) an average Parisian civilian is only intensified by this clash between personal experience and media representation. For the vast majority of the crowd, lacking a good view of the parade, the army remained barely visible when seen first-hand, but was spectacularly, immediately present as soon as you examined the newspaper, the TV, the internet photo galleries. As if the military’s absence at the level of lived experience was only amplified by its rich presence at the level of collective representation. (Worth noting that public representations of the military are, of course, in themselves complex and varying: e.g., the left-center newspaper Liberation showed somewhat fewer military photos than its more conservative counterpart, Le Figaro. And in terms of everyday life, I could tell you about people gaping to see the helicopters passing, little girls sitting in the back seat of a military truck, people lining up to get their photos taken with soldiers in uniform…)

The intellectually fruitful question thus seems to be: where and how does the military appear in the French society and collective representations? How does the military figure in French political life today? Surely the symbolic level is at least as important as the facts of actual current military operations. And this suggests an accompanying question, which comes back to my research project: how does military force enter into university politics? What is going on when, as in the sticker I showed above, we are faced with the metaphor, “knowledge is a weapon”? What happens when “the military” is replaced by “the militant”? When public spectacles of military force are transmuted into objects in academic activism? When we find that “la lutte,” struggle, is a privileged term in French leftist or union movements? When we find all sorts of invocations of the raised fist — a sign which evokes fighting, no doubt, but not really armed rebellion? Take for example this mural, back in Toulouse. 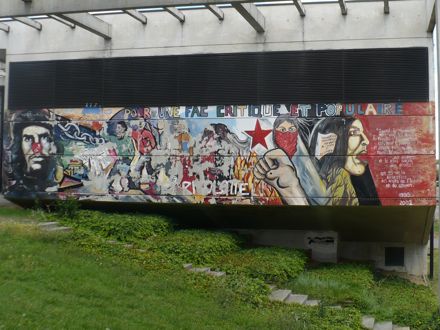 This may have been the most elaborate piece of political art I saw on a campus littered with political art. Look closely. To the left, Che Guevara (with a red nose). Moving right, there’s a dangling chain, what looks like workers on parade with arms raised, faces almost obliterated by the passage of time (or vandalism of the mural, hard to say), a red star and a raised fist, flames, a woman with braids and a face masked by a red bandanna, the Toulouse slogan “Pour une fac critique et populaire.” And at right, perhaps most interestingly of all, a long quotation from the Déclaration des droits de l’homme et du citoyen, which says in its 1793 version (art. 35): “When the government violates the rights of the people, insurrection is, for the people and for each portion of the people, the most sacred of rights and the most indispensable of duties.”

I don’t believe that this article appears in the version of the declaration currently in legal force in France (the 1789 version, better known, lacks a clause authorizing insurrection). But it is striking that even in the “most left-wing university in France” one finds a reference to official, Republican texts in the midst of the most radical piece of political art. This reference works, I think, because activists can appeal to the historical entanglement between Republic and armed revolution as a source of justification for anti-establishment activism. Curiously, this kind of activism can draw simultaneously on Marxist and French Republican imagery. Marxism, of course, also offers plenty of historical moments of actual armed struggle, war, insurrection and counter-insurrection, and so on. Which is why we see the odd juxtaposition of Che Guevara and the Declaration of the Rights of Man in the same mural. Or a yellow hammer and sickle juxtaposed with the figure of a militant painted in the red, white and blue of the French Republic: 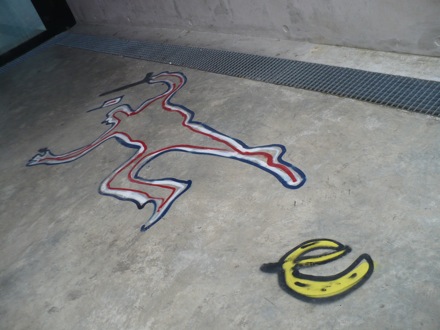 Note what looks something like a sword in the guy’s hand. But in fact, when we examine further, we find a strange tension between, on the one hand, the figure of the activist as an embodiment of radical militancy, and on the other hand, this militant’s subordination in relation to the police, who are (obviously) the figure of state violence: 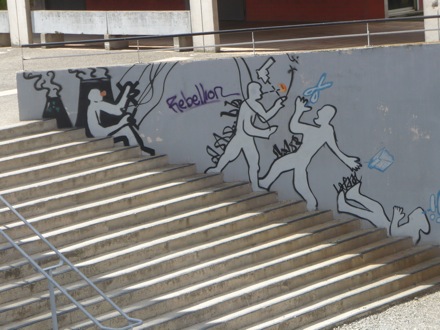 What looks like a policeman — a guy with a pistol anyway — is advancing down the stairs and pushing down what must be student protestors, armed with books and scissors…  it says “Rebellion” but in fact what happens in Toulouse this spring is that eventually the French CRS (riot police) cleared out the protestors. “Sans résistance,” says the news story. But regardless of how or whether actual events are represented in this mural, the “militant” theme is loud and clear: 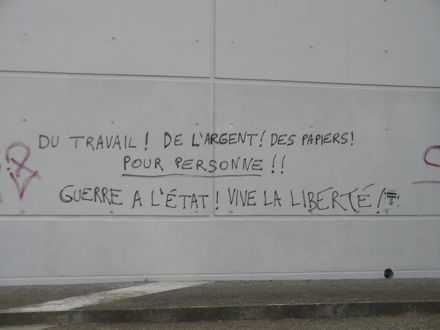 Work ! Money! Papers! For NO ONE !! War on the state! Long live freedom!

Another one put its political message even more simply: 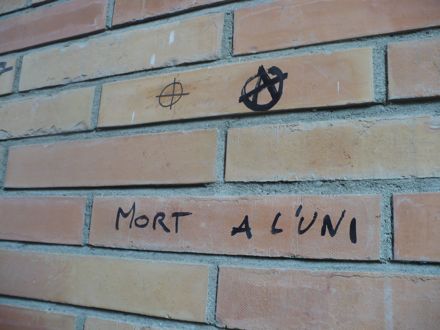 Death to the uni[versity]! … with the anarchist A just above.

And why death? Why death to the university? What does that mean?

Death is the ultimate symbol of violence, the ultimate outcome of military intervention, the ultimate angry political demand. We can see here, in this little piece of graffiti, what happens when armed conflict becomes the model, the working metaphor, for every sort of political situation. Even one about so non-military an issue as national university policy. In this model, every political situation becomes a “struggle,” becomes a confrontation, becomes a reinscription of past histories of revolutionary violence. Of course, many French university activists do not employ this genre of radical imagery. But for those who do, it seems that they accept a traditional image of revolutionary politics that seems in the end little more than a conceptual twist on the ideological categories of the Republican military tradition, which so problematically presents itself in the parade above. In the universities too, militancy seems to be an absent presence: something easier to represent than to deliver, something more easily imagined than lived.

2 thoughts on “Paris-Toulouse: Militant universities and the military parade on Bastille Day”