this is the university’s skin. at the university of illinois-chicago. some building on the south side of roosevelt road. the branches creeping up across the brick and flung in the sun while the wall is in shadow, the brick stained and blurred and colored, the brick covered by creeping vines, the vines dripping down as if the blood of the bricks were pouring out through the mortar, the snow settled into the vines like cowbirds nesting in places they didn’t build. 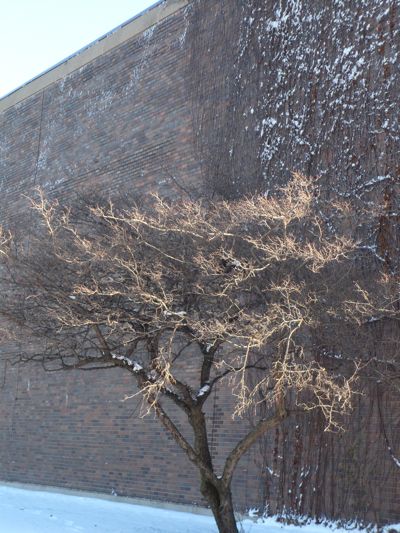 the building stretches away to the left, its cement seam with the snow breaking up where the vines hit the ground, the tree shown in this wider view to spread out in a cloud of sunlit branches, a sole tree guarding the perimeter of the building, a total absence of windows, the vines pouring down. little bits of snow are caught in the brick and in the tree’s branches too. 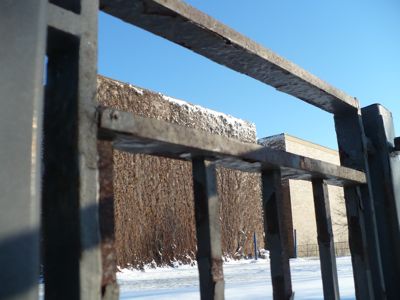 if we bring the camera back still further we see that we are looking through a gate and that the reason why the snow is clear and untrodden around the building is that the building is fenced off from the street with iron.

if the university has a body then its skin is this oddly natural surface, not something that appears to be continuously curated by a meddling artist but something abandoned to the plants that drown out the square sound of the windowless walls by overgrowing them, by lying on them and catching their light. you can see where the iron gate has begun to fray and rust, chips of its finish vanishing, its own shadow falling across it.

the apparent social functions of this architecture are banal: to keep the heat in, to keep the light out, to provide security from the rest of the city. but my aim here is not to delineate the social functions of the architecture, rather to examine the architectural functions of the social. i suppose this ongoing series of my examinations of images of academic space is based on the supposition that everyone on campus must, like me, be experiencing the university as landscape, as aesthetic object, as a semi-ordered architectural conglomerate, even if this degree of aesthetic awareness is so low-level as to escape discussion and maybe not even to enter ordinary life in a meaningful way. but even something like the play of vines on brick, something without meaning, can still have effect.

my advisor william mazzarella thinks of the realm of aesthetic and sensory experience as only precariously integrated with the realm of discourse and the primary processes of ideologization: “the very attractiveness of [for instance] consumer commodities in some sense arises out of their uncanny inability to reify completely the materials upon which they draw” (shoveling smoke, 2003:20). “the life-world of the worker and the image-as-object always necessarily retain concrete elements that exceed the abstracting requirements of exchange value” (43). he calls for “a return to taking the ding-an-sich seriously; not as a route to some repressed ‘truth’ of the object or of the human condition, but rather as a constitutive, historically grounded, yet always excessive dimension of the production of value” (45). “might we not reconsider the idea of the ‘potentialities’ of an image-object in terms of a kind of embodied memory that supports and disturbs the frameworks of discourse?”; “the production and circulation of [for example] commodity images is all about achieving a provisional or temporary ‘fix’ on [the relationship between affect and meaning, the sensible and the intelligible], while at the same time relying on its lability for the harnessing of desire” (48).

what, then, is the relationship between meaning and affect in academic space, between institutional function and aesthetic lability? there’s a new way of phrasing a question that has preoccupied this blog for many weeks now. and whoever (if anyone) is reading this post, please say something about your experience of academic space in the comments!

One thought on “The university and skin”