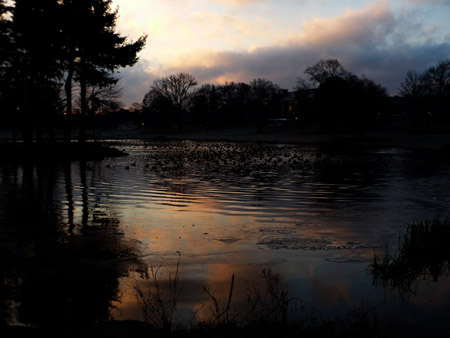 At sunrise, even the droll ornamental lakes of the university acquire a certain glimmer. The pond weeds become shadows. The shadows wash over the shores of the lake and hide them, which is much for the better, as this lake is populated by geese who have draped the banks with their droppings, each one about the size of a skinned baby carrot. They number in the thousands. Consequently, the mirrored sheen of this fake pond offers only a very incomplete simulation of a beautiful natural scene. 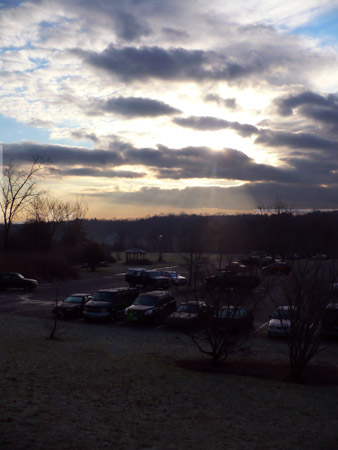 But it isn’t only the artificial lakes that reflect the sky in the morning, it is also the dewy roofs and hoods of parked cars. The staff comes to work early, even the day before Thanksgiving; I suppose many must go straight in to their labs and offices without looking south to the sky. The sun essentially rises in the south in November. The sun rises in the south and careens through the clouds smashing them into small bits and layers only to fall down on the ground without being noticed.

The university is full of things that no one sees. The university is full of rhythms and patterns that serve no purpose and produce no socially recognized effects. That’s an important thing about universities, and it goes for other forms of life too: that as material, sensory, aesthetic and meaningful phenomena, they overwhelm and exceed their designs and their functions. The academic year is littered with gaudy dawns that the college students sleep through, lawns not sat on, trees lying dormant, empty space. I know a professor who has three offices and who also spends half the year abroad. Once I saw a science laboratory down in the basement of the Enrico Fermi Institute, still full of massive dusty equipment and abandoned notebooks, doors plastered with X-Ray Hazard signs, a triplet of dirty wine glasses and a bottle as if the place had been abandoned the very minute that the last scientists finished celebrating their last experiment. The university is full of empty rooms and ignored landscapes. Though the significance of this fact remains to be, well, seen. 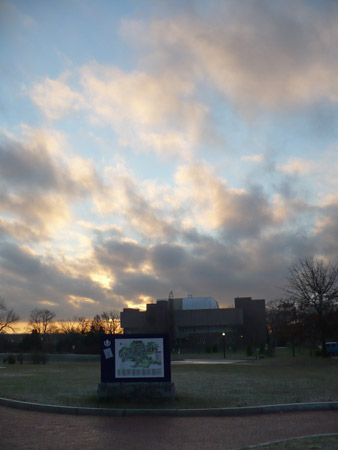 The University of Connecticut campus map is in the foreground. It shows a view of campus from above, one which naturally does not include the sky and barely includes the landscape. The campus map is, we might observe, one of the most public forms of the university’s representation of itself, urgently needed by visitors but generally irrelevant to the natives. It has a double purpose: to help people find their way to a given campus building and then back to their cars, but also to serve as a stylized indexical icon of the campus as a whole. A few clumps of trees are drawn in; the flagpoles are sketched; the clutter of sidewalks is shown, and so are the roofs and colors of the buildings. This aesthetic detail, however, seems to be plainly secondary to the map’s primary function of giving a spatial guide to the arrangement of campus buildings.

Can we say then in general that the aesthetic dimension of a university campus — meaning its potential to be experienced as an artwork, as a landscape, as a pastoral scene of a lake and geese, as the shocked instant of a stained dawn, as pure form and contrast and color and scene — that this aesthetic dimension is partly subordinated to functional ends, partly constructed for functional ends, and partly unintentional and beyond all function? After all, campus architects planned to have their fake lakes, and this ornament is hence at least imagined as functional in producing institutional distinction; and to some extent they feel free to destroy these lakes when, say, a vast new chemistry building or parking lot is needed; and to some extent, well, the trees would have grown up and the clouds would have blown over in the early morning whether or not there was even a university here.