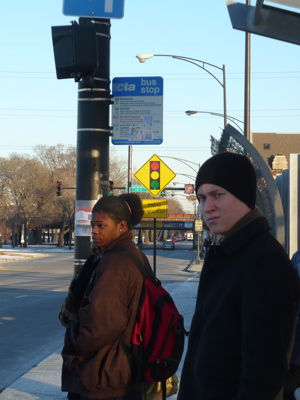 This is the eastbound bus stop at Garfield. Dozens and dozens of university students come through here mornings, getting off the red line, waiting to go to campus. It’s one of those places where there is interracial coexistence without much real human contact. Pretty much all the white people here are university students. The university is set in a white enclave in an overwhelmingly black part of the city. There’s still a real degree of anxiety about race, or maybe it’s about class difference, or about both at once, inseparably. I’ve met white students who say they’re afraid to come here at night, not for any articulated reason, just out of an ingrained sense of “danger.”

This too is a border zone of the university, though not one where you can see a physical boundary. But I like this photo because some of the social barriers are written on the faces of the two people who ended up in front of my lens. The lady just looks out into the street, indifferent, sort of peaceful. The guy glares at me, his eyebrows creased, his mouth jagged, his head off axis. He hated me, I felt at the moment when I clicked the shutter, but just then the bus showed up and we went off in opposite directions.

It’s a place where strangers have different ways of remaining strangers to each other, of remaining separate from each other, of defending themselves against their fantasies of other people. Sometimes there are people who want cigarettes or directions. In warmer weather, people read academic texts while leaning on the edge of the bridge. There’s a perpetual howl from the highway and subway that run below. The edge of the university stretches off into the abyss of the road. 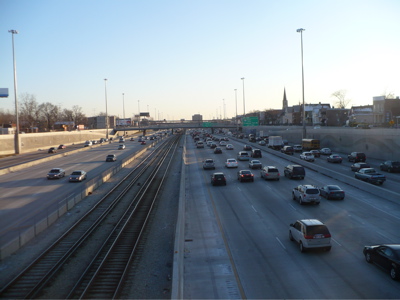 One thought on “Suspicion and indifference”