Last week I went to visit Aix, which might become one of my major fieldsites next year. The university building itself was falling apart; as it turns out, it was the one featured in last year’s complaint about the physical decrepitude of French universities. In spite of the physical decay, it was all lush with plant life. 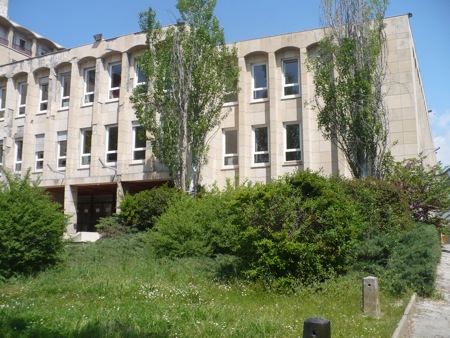 Now as it happened, the week I arrived they were in the last days of campaigning for student elections to various university administrative councils, primarily the Administration Council (Conseil d’Administration, which is the major decision-making body) and University Life and Study Council (Conseil des Etudes de la Vie Universitaire, which handles pedagogical matters). Graduate students are also eligible to sit on the Scientific Council (Conseil Scientifique), which sets research policy. 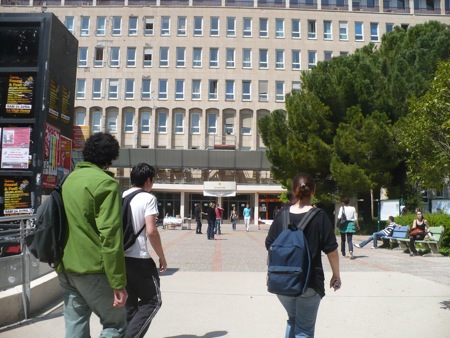 This was the courtyard by the main entrance. In the center of the photo you can see the little group of people handing out leaflets, in what became practically a competitive sport to reach the maximum number of potential voters. 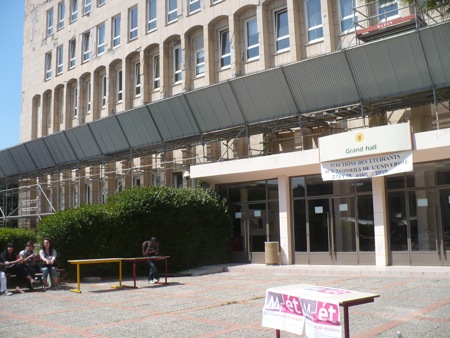 There were also informational tables, such as this one for the Mouvement Etudiant, which is the right-wing student group associated with Sarkozy’s UMP government. As you can see, they didn’t always bother to sit by their table.

Inside these doors under the election banner, there were a series of informational panels, one for each group. From left to right: 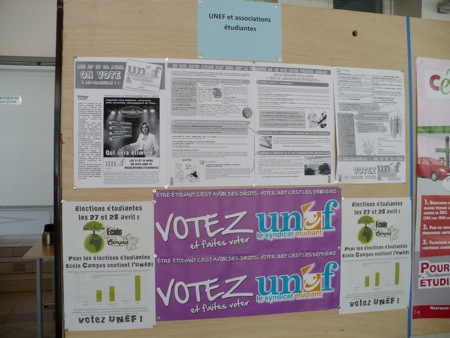 UNEF, the National Union of Students in France, is the largest French student union. These signs proclaim that they are “the” student syndicate — the only one present on every French campus, they’ve told me. They’re said to be close to the Socialist Party. Their election platform had a long list of 21 different demands; the more notable were “against competition” (which is a way of opposing the government’s market-oriented university reforms), “quality job placement,” “against selective admissions to master’s programs” (open admission is a traditional university value here, though more and more threatened), for a university daycare center, and for reimbursement of students’ costs who commute to Aix from Marseille. A few of the demands, for instance for recycling on campus, seemed more perfunctory and designed primarily to compete with other groups (the Greens in this case). And the demand for free photocopying on campus seemed like a good bit of pork for their student constituents. 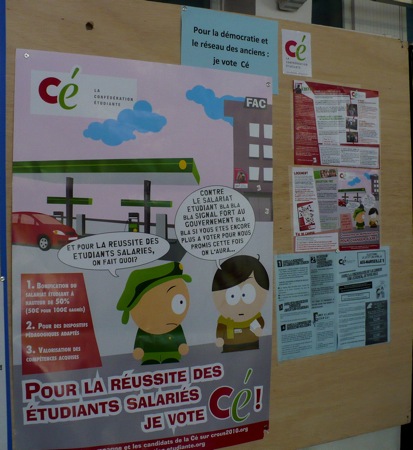 Cé, the Student Confederation, also seemed relatively centrist by student politics standards, defining themselves in opposition to UNEF. The big slogan here is “for the success of working students I vote Cé.” The cartoon has the green character saying: “and for THE SUCCESS OF WORKING STUDENTS, what do we do?” Response (from the yellow-scarfed UNEF militant): “AGAINST WORKING STUDENTS bla bla bla STRONG SIGNAL TO THE GOVERNMENT bla bla if you’re still voting for us promise this time we’ll get something…” — which I guess is saying that UNEF has made campaign promises they haven’t followed through on.

Cé also advocated an alumni network (un réseau des anciens), which is a proposal I haven’t ever heard elsewhere; they demanded that “skills learned from experience” be validated by the university; and they proposed a government supplement to student workers’ salaries. On a more tactical level, they officially opposed UNEF-led (or left) blockades of the university, calling them “sauvage”; these blockades presumably lasted a long time during last year’s strike. 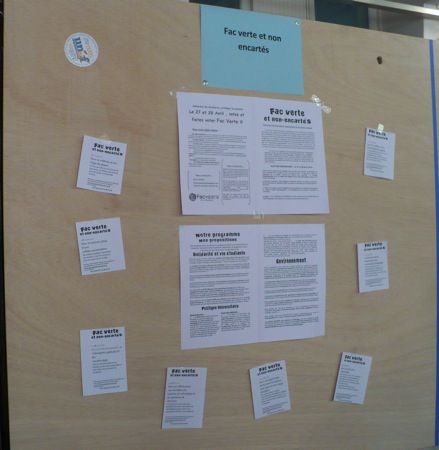 Fac Verte, the equivalent of the Green Party on campus. They explained to me that they are a group of various subgroups — “ecologists, décroissants, disobedients, alter-mondialistes, libertarians, anticapitalists” — and their politics proposed a sort of student labor exchange, a daycare (cf. UNEF), free public transit for students (cf. UNEF), recycling (cf. UNEF), recycled paper in the xerox machines, organic fair-trade food sold on campus, a carpool network, new environmental standards for academic buildings, and the like. They say they’ve already succeeded in building a collective garden. 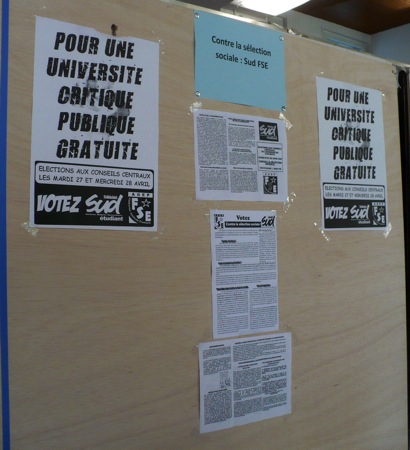 The left-wing groups (notice how these panels were arranged in a progression more or less from most centrist to least centrist) on campus are SUD-Etudiant (SUD stands for Solidaire, Unitaire, Démocratique) and FSE (the Student Union Federation). They are “syndicats de lutte,” which could be roughly translated as “fighting unions” or “unions in struggle”; they say “we privilege collective action over backroom negotiations to obtain our claims.” Their claims involve a total opposition to government reforms; they also demanded a campus daycare, “free and easy means of contraception,” and the renovation of the (decrepit) campus buildings. I was told that they don’t really do elections or care greatly about electoral politics, and they were probably the least aggressive in their campus outreach. 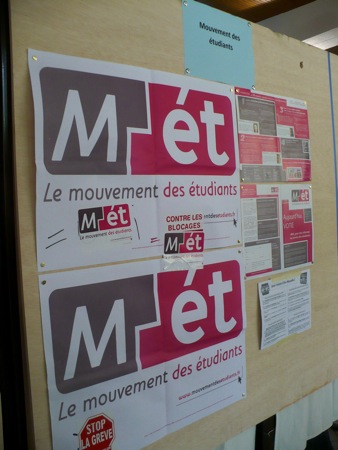 Mét, formerly known as Uni, said that they changed their name to be more appealing to the public. Not to mention getting a nice cheerful new color scheme, grey and pink. Their big argument here was “Stop the Strike!” or “Against the Blockages,” and they explained that they were for a closer link between universities and the business world, for more job placement, and, in essence, against the campus left. (Their pamphlet argued for punishing student strikers.) They were very slick and professional and extremely pushy, deploying canvassers at the campus entrances, intentionally encroaching on other campus groups’ space. 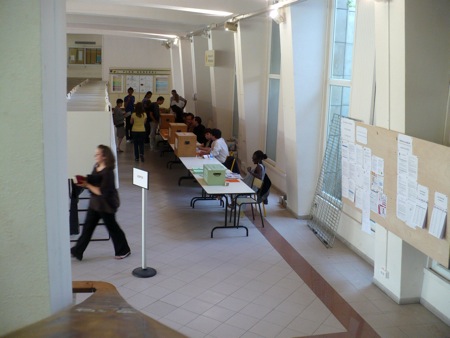 The elections themselves took place at this table (the above signs were hung on that white structure at left). As it turns out, UNEF won. Their site had a little press release:

“A large victory for UNEF, with 38% of the votes. It was a clear victory, leaving no room for appeals. UNEF showed a strong progression since 2008, gaining 3 seats, and returned to its place as the foremost student organization. UNEF obtained 2 seats of 5 on the Administration Council (1 seat for the Greens, 1 for SUD/FSE and 1 for Cé), 6 seats out of 16 on the University Life and Study Council (3 seats for the Greens, 3 for SUD/FSE, 2 for Mét and 2 for Cé), and 3 out of 4 seats on the Scientific Council.

“UNEF thanks all the students who have supported the UNEF project; its three priorities will be:
-annual compensation for students in all majors
-fighting against competition between universities
-fighting against selective admissions in master’s programs

“We thank you for the confidence you’ve shown in us.”

2 thoughts on “Student elections in Aix-en-Provence”