Last week while I was in Toulouse, I went to take a look at the local university (Mirail), to see if it turned out to be the one in the video I posted about last week. And indeed there were a large number of decrepit buildings, occasionally graced by lovely flowers. But the buildings also turned out, like Paris-8, to display an intense activist visual culture: of graffiti, of slogans, of icons, of murals, of messages that contradicted each other, of clashing color. 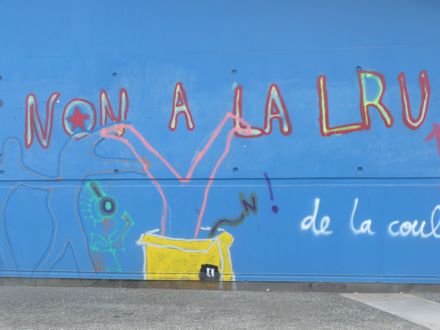 “For a critical and popular university [fac]!” Apparently this is a traditional militant slogan at Toulouse.

“Get a new slogan please!” is the caption written below by someone who apparently disagrees or is simply bored.

[La fac, i.e. la faculté, is a now bureaucratically obsolete term that used to designate a college, a faculty, a division – as in the Faculty of Arts, the Faculty of Law, etc. It is still used in common parlance to refer to the public universities – les facultés – as opposed to other institutions of higher learning (private business schools, elite government institutes, and the like). 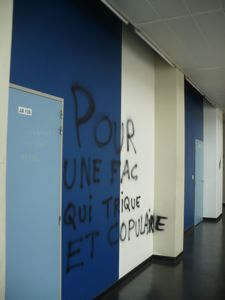 “For a hard and copulating university!”

This is one of those semi-untranslatable parodies. Instead of “une fac critique et populaire” we have “une fac qui trique et copulaire,” a perfect rhyme with a perfectly divergent meaning. “Triquer” is, according to a semi-reliable online source, a verb meaning “to strike” (like with a baton), which has militant connotations, but also “to get hard” and “to possess carnally.” And “copulaire” is an impromptu adjectival form of “copuler,” to copulate. So instead of a critical and popular faculty we have… well… one that gets aroused and copulates. Is anyone really advocating a sexual university, though? I guess this is mainly sheer parody, though there are long-standing and noteworthy associations between ’68 French leftism and sexuality that are in play here too. A famous slogan was, for instance, “Plus je fais l’amour, plus j’ai envie de faire la révolution. Plus je fais la révolution, plus j’ai envie de faire l’amour” – the more I make love, the more I want to make the revolution; the more I make the revolution, the more I want to make love. 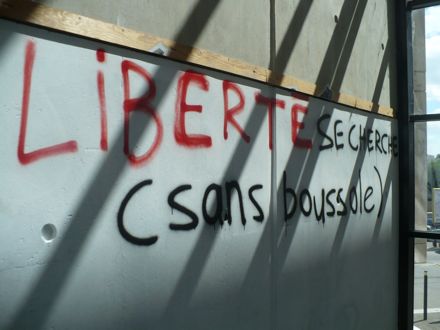 Freedom in search of itself (with no compass). Seems rather ambivalent. 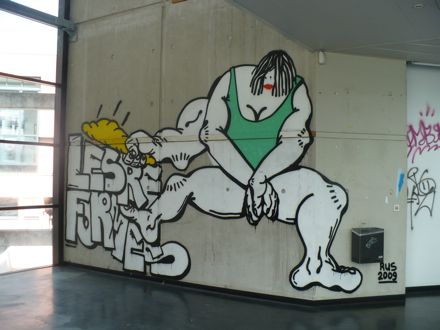 The muscled figure of a rather peculiar, gender-ambiguous creature, with long hair and what looks like lipstick but also with huge knees and three arms, is beating the reforms (LES REFORMES) with a yellow club. 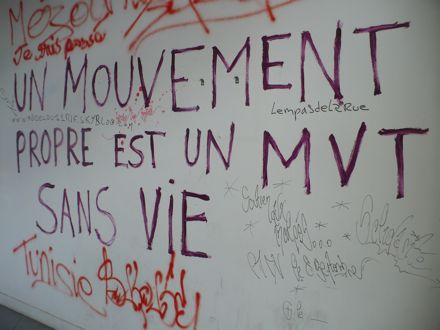 A neat movement is a lifeless movement.

(At bottom, there’s something about Tunisia. Did I mention that the university is in a major immigrant neighborhood?) 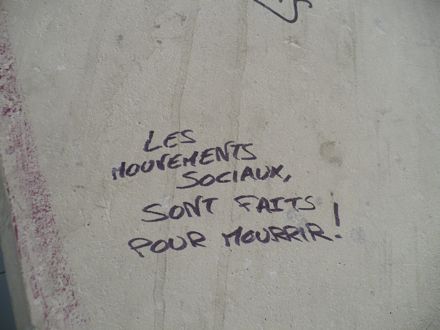 Social movements are made to die. 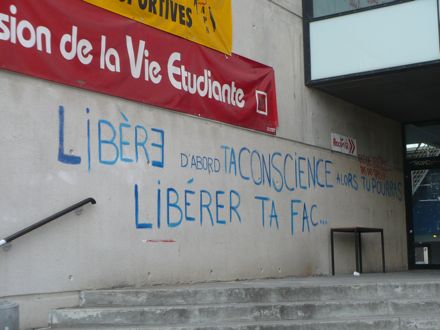 Free your mind [conscience, consciousness] and then you’ll be able to free your university [ta fac].

This struck me as a particularly hackneyed and empty slogan, personally, although an acquaintance in philosophy thought it was fine and not unreasonable. But I think she may not have shared my ingrained cynicism (or my sense of resonance with tiresome slogans from The Matrix). 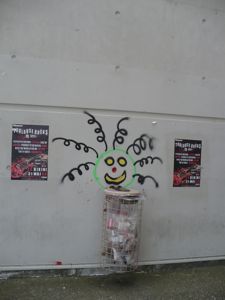 Voilà: a trashcan with a human face! Or a face of some sort, at least, more cartoon than realistic. 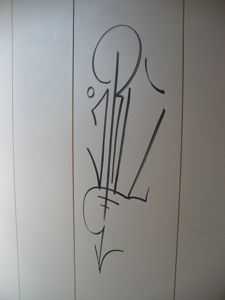 I have no idea what this symbol means. 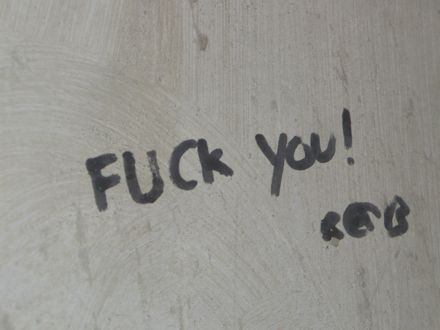 This one seems clear enough, by contrast. Always curious when French speakers choose to resort to English… 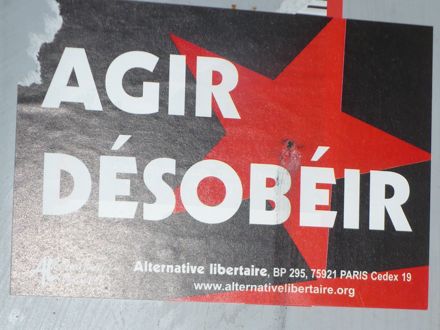 Evidently this is a sticker belonging to a small libertarian socialist-anarchist organization. Their color scheme – black, red and white – and the red star are pregnant with ancient left-wing symbolism, and tend to communicate their identity more than the rather abstract slogan itself. 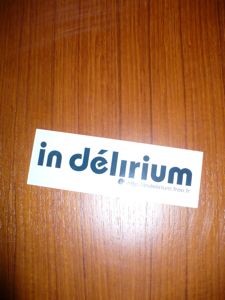 I rather like this one. It masquerades somewhat as another political slogan (Delirium! What a wonderful political emotion!), but turns out to be a sticker advertising a local band. (The link is in small print unreadable here.) Hence showing us yet again that political signs are vulnerable to various forms of recontextualization, reappropriation and culture jamming. 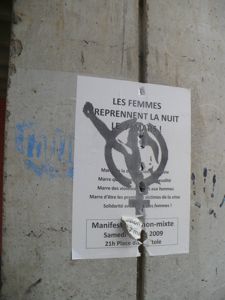 Women take back the night on March 7th!

And then in the torn part of the page: “Manifestation non-mixte,” i.e. a non-mixed-sex demonstration for women only. With a curious icon in the background: set upon the traditional symbol for women, we find, reaching out of it, the figure of a woman (whose femininity appears to be indicated essentially by long hair and context) raising up her fist. An interesting icon, I think, because it reappropriates the raised fist, such a traditional symbol of leftist, revolutionary masculine power.

Looking back over this post… I see that I am not halfway through my collection of these images, but I suppose I should save the rest for a new post, lest this one grow any longer, and I miss dinner because of my blog. Which is a distinct possibility.

For now, I’m thinking of this collection of images as an incoherent political landscape, a collection of traces of contradictory political projects, commercial projects, rhetorical disagreements, nihilistic skepticism, comic optimism. I guess, in this presentation of images isolated photographically from their architectural and spatial contexts, one loses a sense of how the images become part of the buildings, blend into the walls or jump out from them, form a piece of everyday life. Walking around the university, no one besides me was looking at these messages. They become part of the background. The ambiance of the place. There’s an interesting paradox in these messages: their various cries for attention and urgency become reduced in daily life to a kind of vague institutional atmosphere. They signify student intervention in academic space even as they signify the impotence of this intervention as it turns to mere ambiance, something that appears to be largely felt rather than seen, ignored rather than heard. Of course, as types of media, graffiti and signage are remarkably unidirectional, leaving no indication even of their authors’ identities, much less a way of offering a response, aside from scrawling one’s own message (which creates an apparent dialogue between graffiti tags or signs without necessarily reaching the original authors). Unless some kind of contact info is given in the message (the occasional URLs, for example), these signs are just there, provoking reaction without affording any obvious possibility for interpersonal contact.

2 thoughts on “Militant student slogans and iconography in Toulouse”