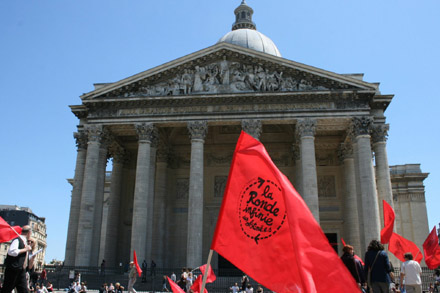 100 hours to make teaching and research into a campaign debate

Four months of strikes, of protests, of occupations, of infinite rounds of the stubborn. We, who make, think and dream the university, we, teachers, researchers, staff and students, affirm that the current reforms striking the university are part and parcel of a real political will, one in full submission to the economic field.

Four months in which the movement against the consequences of the LRU has grown stronger, because we understand today the deep vices and mortal dangers with which it threatens the university: all-powerful presidency, business-like management, marginalization of scholarly criteria in decisionmaking, generalized precarization of the staff, explosion of the price of tuition. This law will produce in France what it has produced wherever these principles are put to work: arbitrary management of careers and research groups, dependence on private money, walling-off of knowledges, destruction of whole teaching sectors, growing social injustice.

At once authoritarian in its implementation, bureaucratic in its principles, and liberticide for the university world, this law “Liberties and responsibilities of the universities” (LRU) is only a French caricature of a European process.

In effect, the European university system is affronted today by a transformation and reforming that is the academic side of the submission of the whole of society to the “invisible hand of the market.” The promoters of this society and their national craftsmen have associated this destruction with the names of two of the oldest European universities, those of the Sorbonne (declaration of 1998) and of Bologna (declaration of 1999).

But the “Bologna Process,” which is at the heart of European university politics, has never been publicly discussed. Its inscription in the Lisbon Strategy (2000) destroys the university as a place where enlightened and thinking citizens are formed; it means foreclosing on the values of elaboration and transmission of knowledge on which European universities should rest. In appearing to valorize the university’s missions, it negates them. It aims to apply to the university world rules that can never be applied to it.

It is thus time to affirm that the Bologna Process and the Lisbon Strategy have the function of introducing into the universities a generalized competition put under the auspices of economic profitability.

It is time to affirm that the notion of “employability” is no more than a tool for destroying the humanistic knowledges that are at the heart of our civilization.

It is time to affirm that the notion of the “knowledge economy” conceals the transformation of knowledge into an economic good.

It is time to affirm that the slogan of “adapting the university to society” doesn’t say that this society is reduced to purely economic ends.

Today, we affirm that the adaptation of the European university doesn’t necessarily entail a reductive utilitarian obsession with the employability of its graduates. We refuse the application of this market logic to the university, this logic which reduces the rational to the useful and calculates utility in terms of profit. The university is not the place of a pure utilitarianism calculated in exclusively economic terms. The acquisition and invention of knowledge is a right for all and cannot be limited. Knowledge, creation and research are not commodities, but are the good of all: they are not for sale.

We are stubborn and our vigilance, infinite.

This should give you a flavor of the arguments against the current university reforms (which have been ongoing now for years, actually). And I quite like the poetic structure of this document. Of course, if one were to evaluate the results in purely utilitarian terms, as it seems to demand not to be evaluated, it probably wouldn’t count as a total victory — the recent elections were a major loss for left-wing parties and a gain for the UMP, which, of course, is the party that has implemented the university reforms that the Ronde is protesting. But people I talked to at the time were happy to see that five political parties had sent responses to queries about university policy. Just getting a political response already is a success for a relatively small group like this one, I’m sure.

And all month I’ve been asking people: where do they find political hope after months of politically fruitless protests and demonstrations? Stubbornness, in this light, becomes a rather interesting and strategic political emotion, a way of refusing despair and refusing defeat and a way of deferring the end of a struggle until the desired results have been obtained.

(Thanks to Jean-Claude for the photo of the Ronde.)

One thought on “The Infinite Rounds of the Stubborn”