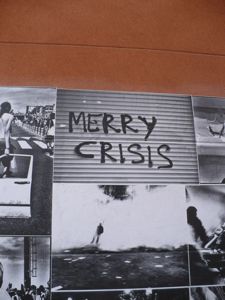 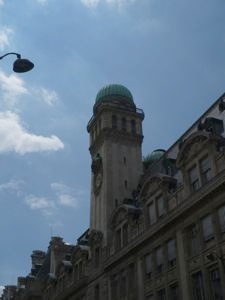 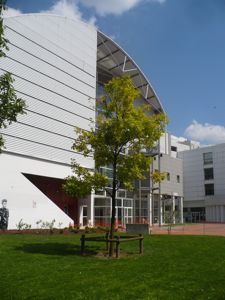 Two French universities. At left, the Sorbonne. At right, Paris-8. It doesn’t look like a den of graffiti in this picture, does it? From certain angles it looks slick. White. Steel. Futuristic, even, like a university garden city. With newly planted trees. The low orange fence, dimly visible here, shows that campus is still under construction. The Sorbonne, on the other hand, is a visual object that displays its prestige and institutional centrality through a long parade of arches and stone finery and towers, through the conspicuous display of functionless decoration, through pillars and chimneys and wrought iron that connote its age and full integration into the architectural code of state power in central Paris. (In other words: the Sorbonne is made of the same color stone and with the same bombastic architectural flourishes that characterize important public buildings in its part of town. Though I’m not an architect so I lack the vocabulary to really describe this homogeneity.)

The Sorbonne does a pretty good job of integrating its traditional stone architecture with its pristine self-presentation as a simultaneous icon of wealth, prestige, and the French establishment. On the other hand, at Paris-8, I sense a certain dissonance between the architectural invocations of futuristic architecture and the decrepit graffiti-laden floors and walls. 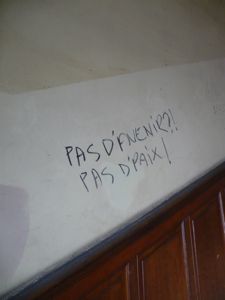 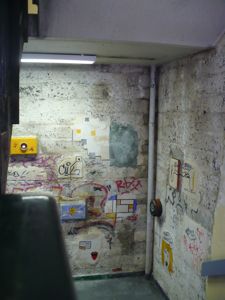 No future?! No peace! says a lone piece of militant graffiti in the Sorbonne, again at left. The staircase in Paris-8 at right, by contrast, is tagged twelve different places in red and yellow, its aestheticizing decorations patching the decrepit stairwell walls. The Sorbonne staircase has varnished wood paneling; Paris-8 has stained cement block and bare pipes. The texture of the two places differ, radically: sheen vs dirt. 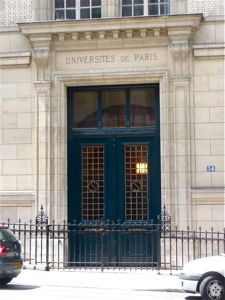 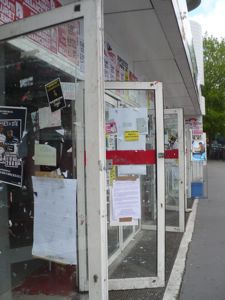 A particularly good place to see the symbolic differences between campuses is in their doors. Their textures differ radically, again. At the Sorbonne: blue wood with many-paned windows divided up by metal bars, the university’s name carved in stone, a large S in wrought metal in the middle of each doors (just visible here), a wrought-iron fence with tulip tips, stone pillars emphasizing the doorway. Paris-8 by contrast: modern doors, metal, one pane of glass each, by design unadorned, in practice festooned with posters, with abandoned posters, with scraps of torn-down posters, part of one of the doors cracked (invisible here, alas) where someone must have kicked it, set on a low threshold. “Université Paris 8 Vincennes -> Saint-Denis” is set like a billboard above the doors in white and red on black (it runs the length of the doors here, just above).

There is a major difference between universities, too, at the level of security just inside the doors. When you go inside Paris-8, you don’t have to show ID but the place is visibly full of security cameras. The security personnel, apparently contractors from a private company, are in casual clothes and tend to lurk inside their security posts; the security post near the door is visibly full of surveillance monitoring equipment. When you enter the Sorbonne, on the other hand, you have to show the uniformed guard your ID and maybe state your business, but once inside, you are essentially unattended. One might schematize this thus: Paris-8 doesn’t care who comes in but doesn’t trust anyone on the premises; the Sorbonne is selective about who can enter but is happy to let its trusted visitors do what they will. (This, to be fair, is not purely a difference of class-laden institutional attitude. The Sorbonne is in a major tourist district, and it seems to be primarily tourists who are turned away at its gates. I have always been let in with my Chicago student ID.) 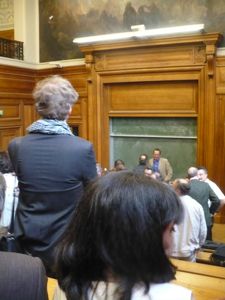 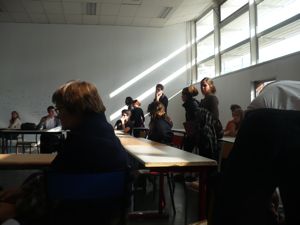 By now the symbolic differences between the two universities should be becoming second nature… Sorbonne at left, Paris-8 at right. A small amphithéâtre vs. a large classroom. Decorative paintings vs bare white walls. Wooden decorations vs plastic chairs. A bunch of old guys in suits vs a bunch of young kids in casual clothes. This place is ripe for a structural analysis. 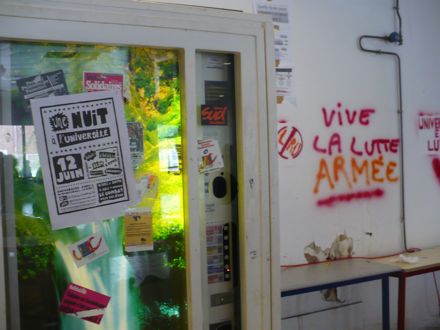 Could you tell by looking that this is a vending machine? A vending machine turned into a platform for activist signs and stickers. A vending machine framed by graffiti that reads “Long live armed struggle!” and a crossed out “LRU” (Loi relative aux Libertés et Responsibilités des Universités, the controversial French university reform bill). The stickers, unreadable here, make reference to Palestine and the grêve générale (general strike) in Guadeloupe, and to militant groups (Sud-Etudiant, Union Syndicales Solidaires), and others I can’t make out in my slightly blurry photo… but I adore this as a spontaneous collage of impersonal commodity exchange (it’s a vending machine after all) and militant/graffiti poster art. Are the activists appropriating the vending machines as political advertising opportunities? Or are the activist signs ultimately just drawing attention to a cheap place to buy a cold drink?

Not that I have any quick answers. But I’m growing to like commenting on images. It’s a means of making spaces and atmospheres accessible at a distance, of capturing social dynamics as they become visible. Images have a tactility that can only be approached in prose by resorting to novelistic or surreal styles of description. And it takes time to produce that description… while a photo is taken in a sixtieth of a second. Though, actually, that’s a lie. It’s irritatingly time-consuming to take photos, download them from the camera, sort them, archive them, compare them, interpret them. Visual texts are laborious. (Note to self: find the people who design and put up these activist signs, inquire about how it works.)

I rather hate this phrase, a “visual text.” Images are not intrinsically texts, and though they can certainly be approached as such (examining their formal structure, their intertextualities, their meanings), it’s the height of scholasticism to blindly assimilate images to the realm of texts, to textualize the visual, thus rendering it all the more vulnerable to academic appropriation. I rather prefer the notion of “visual cultures,” which suggests that the visual can become a cultural value, an object of collective work and concern, as in the hallway graffiti of Paris-8 or the towers of the Sorbonne. It’s interesting that the visual environments of universities can articulate commentaries on the university, relations to the university, so that the visual culture constitutes a reflexive social space of its own rather than a mere background on which other kinds of social action occur.

3 thoughts on “Visual culture and institutional difference: Paris-8 & the Sorbonne”